Chaos at Bomas over suspicious laptop

The device has since been confiscated by the police 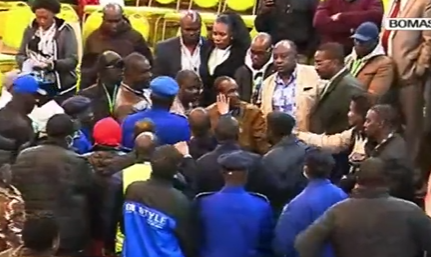 ELECTION 2022: A screen grab of the chaos at Bomas of Kenya.
Image: COURTESY

Chaos erupted at the Bomas of Kenya after an IEBC official was allegedly found with a suspicious laptop.

This after a lady drew the attention of Azimio la Umoja  agents.

The said lady grabbed the laptop, saying she would only give it to the police, after they arrest the official.

The agents gathered caused commotion, as they questioned why the official was on that floor with the computer.

They claimed he was making rounds between the verification floor and outside the observation area.

In a video seen by the Star, police are seen trying to calm the unrest.

The laptop has since been confiscated by the police.