At least 4.1 million people across the country, up from 3.5 million in May, are now surviving on food donations.

•In a monthly forecast for July, Gikungu said only Western Kenya and parts of the Coast are assured of near-average rains this month. 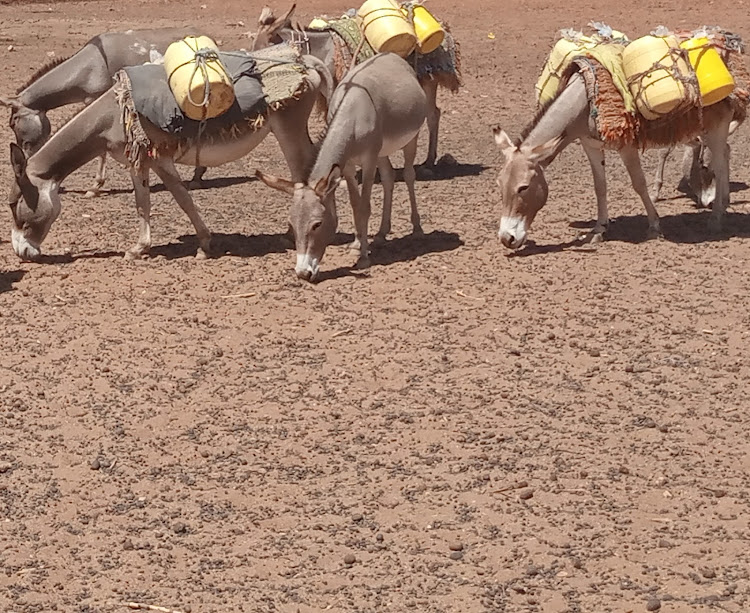 Donkeys graze on bare ground in Tarbaj subcounty, Wajir, on May 30
Image: File

The ongoing drought in many parts of Kenya will continue with most places receiving inadequate or no rain this month, the Met department has said.

July marks the peak of the cold season, but temperatures will remain slightly higher than the average for this month in most parts of the country.

“The current shortage of water, food, pasture, and browse for both human and livestock use across the ASAL (arid and semi-arid lands) areas of the northeastern, parts of the northwestern, and parts of the eastern sector is expected to worsen due to the dry conditions predicted for the month,” Met director Dr David Gikungu said.

These areas have not had adequate rain since late 2020, a climactic event not seen in at least 40 years, experts say.

At least 4.1 million people across the country, up from 3.5 million in May, are now surviving on food donations.

The National Drought Management Authority said this number is expected to increase and more camels, cattle, goats and sheep may die if it does not rain.

In a monthly forecast for July, Gikungu said only Western Kenya and parts of the Coast are assured of near-average rains this month.

Others are areas northeastern counties of Turkana, West Pokot, and western Samburu.

“The expected total rainfall amount [in these counties] is likely to be near the long-term average for July,” Gikungu said.

“A few days are expected to be cold and chilly with daytime (maximum) temperatures falling below 18 degrees Celsius in various parts. Occasional afternoon showers are likely to occur at the beginning of the month,” he said.

The largely dry weather is likely to exacerbate hunger and starvation across the country.

In a statement, Adan said funds would be distributed under the Hunger Safety Net Programme.

He said Mandera, Marsabit, Turkana and Wajir counties were among the hardest hit by the ongoing drought after four consecutive failed rain seasons.

The CEO said the situation has undermined livelihoods and community coping mechanisms.

He said the authority has disbursed Sh638.6 million under the drought shock responsive cash transfer portfolio to an additional 58,000 households in the four counties.

"Turkana has the highest number of beneficiaries with more than 35,000. The county has received Sh195 million in HSNP routine cash transfers."

The programme is expected to benefit 2.3 million people in the region.
Business
4 months ago