With due respect, I'll not appear for Raila's deputy interview - Kalonzo

He has asked Ruto' team to stop claiming that they are fighting for him.

• Kalonzo has also said that he surrendered his 2017 presidential candidature in favour of Raila, hence, a suitable man for the position.

• The seven-member team of religious leaders and Kalonzo's representative is expected to forward two names Raila and President Uhuru Kenyatta. 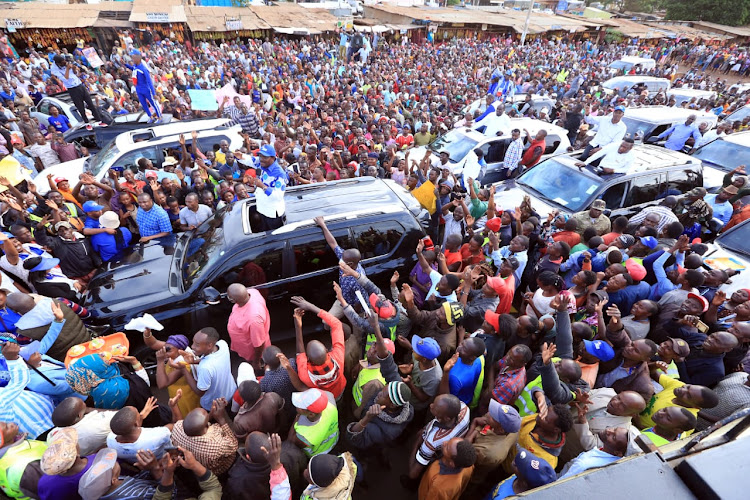 Wiper party leader Kalonzo Musyoka has finally settled the matter that has been the subject in the country for a while as to whether he should appear before the Azimio Running Mate Selection Panel.

Addressing the residents of Sultan Hamud and Emali town in Machakos on Thursday during the campaign trail, Kalonzo said that he will not face the selection panel.

Translates to: I have so much respect for the selection panel. Let them not perceive me as a rude person. But it’s Kenyans who have said that Kalonzo has been the Vice President to late President Mwai Kibaki for five years, Kalonzo has been raila Odinga’s running mate from 2013 and 2017, what kind of interview is this which you are going for?

“I said in due respect that no, I will not appear for interview.”

Kalonzo has also said that he surrendered his 2017 presidential candidature in favour of Raila, hence, a suitable man for the position.

He has also asked the Kenya Kwanza Alliance team to stop claiming that they are fighting for him to be appointed as Raila's running mate.

Instead, Kalonzo said that he will ensure that the Kenyan Kwanza team that is being led by Deputy President William Ruto will be defeated by the Azimio.

"I don't want UDA to fight for me, I want to bring down UDA."

Kalonzo, also said that the people were the only interview that the panel needs to consider in their interview.

"This is the People's Interview."

According to Kalonzo’s confidants, it is the height of humiliation to parade the former VP before a panel. He should, in their view, snub the process to guard his dignity.

Makueni MP Daniel Maanzo said the Wiper boss must not be humiliated before a panel, warning Raila risks losing the Ukambani vote if their man does not land the ticket.

The seven-member team of religious leaders and Kalonzo's representative is expected to forward two names Raila and President Uhuru Kenyatta will consider for a running mate.

The Wiper boss is at the crossroads on whether to submit to the seven-member panel or not.
News
2 weeks ago

"Please pick Kalonzo as your running mate if you care so much for him," Mutua said.
News
2 weeks ago
by KEVIN CHERUIYOT Online Journalist
News
05 May 2022 - 19:40