"Your hypocrisy is rich. Leave Azimio matters to us," Mutua said.

• He told off the second in command for poking his nose where he is not wanted, insisting that the Azimio process is inclusive, unlike his. 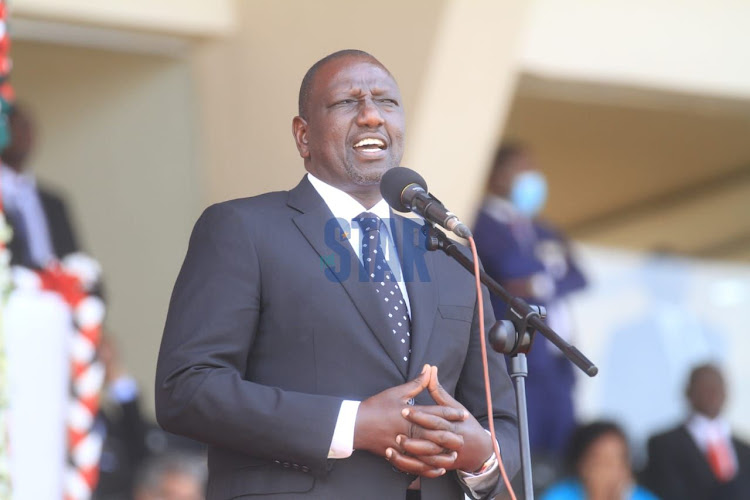 While responding to the DP's tweet on subjecting Kalonzo to humiliation, Mutua said Ruto's hypocrisy is too much and he should pick the Wiper leader if at all he cares about him.

He told off the second in command for 'poking his nose' where he is not wanted, insisting that the Azimio process is inclusive, unlike his.

"My advice to @WilliamsRuto — please pick @skmusyoka as your running mate if you care so much for him. Your hypocrisy is rich. Leave Azimio matters to us. Stop poking your nose where it doesn’t belong and is unwanted. Our process is inclusive/participatory. Yours is opaque," Mutua said.

His words came shortly after Ruto equated subjecting the Wiper leader to a running mate interview to humiliation and impunity.

The second in command insisted that every leader deserves respect.

He added that Kenyans must unite to eliminate the culture of deceit in politics, which is all some politicians are known for.

"Though we are competitors, to subject Kalonzo to some humiliating 'interview' is impunity. We must unite to eliminate the culture of political deceit, the hallmark of some politicians. Whatever the circumstances every leader deserves some dignity and respect. Heshima si utumwa," he tweeted on Wednesday.

His Kenya Kwanza Alliance counterpart, Moses Wetang'ula also said that the former Vice president deserves better from the Azimio team and that the anger from his allies was justified.

"He is at it again, disrespecting and humiliating his comrades. Now  Kalonzo is to prostrate himself before Raila loyalists to demonstrate his “suitability” to be a running mate. SKM you deserve better! The anger is justified," Wetang'ula said.

The selection process created by Azimio has triggered speculations that Kalonzo might land a different role.

This has caused unease in Kalonzo's camp with allies urging him not to show up for the running mate interview.

They argue that he has been vice president for five years and deputised Raila twice. They insist that going for the interview will be disrespectful.

“The choice is his (Raila’s). If he wants to be the President, let him look for Kalonzo. I won’t advise my party leader to appear before any vetting panel to be told to say his names as they appear in the ID. That is rubbish,” Makueni MP Daniel Maanzo said.

"We don't want a deputy president like Ruto," Junet said.
News
7 months ago