Kirinyaga guests blow hot and cold like Mashujaa Day weather, but no storms

No politics, nothing nasty, no violence, a man rushed onto the field and shouted 'Baba'!

• Curfew was lifted, Ruto praised Uhuru, the President did not reciprocate, Raila said there's never been a war between the Kikuyu and the Luo

• The President's speech ended in a loud cheer as residents got their greatest wish: No more curfew. 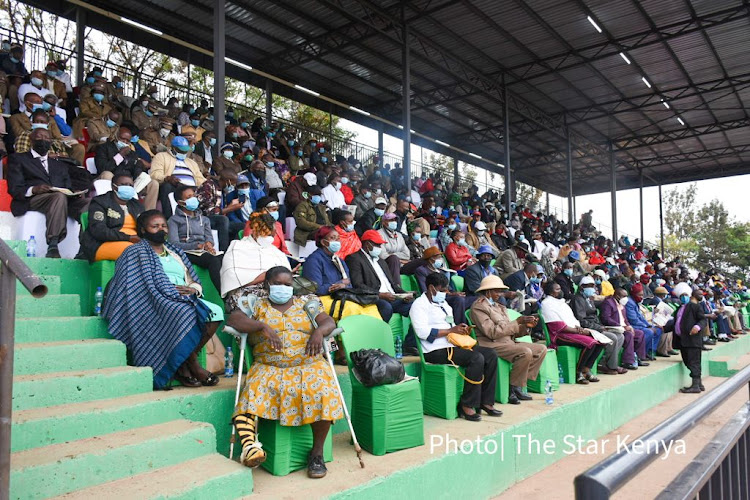 Kenyans from different parts of the country congregate at Wang’uru stadium in Kirinyaga County to celebrate Mashujaa day on 20, October 2021./
Image: MERCY MUMO

Just like the day’s weather, the mood at Wang’uru Stadium in Kirinyaga county quickly changed from cold to hot.

It had been rainy and cold as guests arrived at the stadium in Mwea area.

To warm up the ground, entertainment groups showcased their singing, dancing and drumming talents. It was magnificent and got most people on their feet.

However, soon as the sun got up, so did the political temperature; residents cheered or remained apathetic, there was no anger, no scenes.

While President Uhuru Kenyatta devoted his speech to his government's achievements, his estranged deputy William Ruto praised Uhuru's leadership. He promised to continue to fulfil his legacy if he is elected president..

Former Prime Minister Raila Odinga reminded resident of their history, saying there has never been a war between the Kikuyu and the Luos.

“I have always been a friend of the mountain,” Raila said.

The chief guest, Malawi President Lazarus Chakwere too prised the Presidents, He reminded Kenyans how Kenyatta's image is used on some of heir currency.

The stadium was decorated in the colours of the Kenyan flag..

The lucky 2,000 residents dressed warmly trooped in early as they picked strategic positions in the stadium.

In not-so-hushed tones, three topics were most discussed: why different presidential hopefuls would lose, how ruthless the struggle for Kirinyaga governor position had gotten and whether or not the President would end the curfew.

On the red carpet, about 100 red chairs were positioned, all safety and etiquette protocols were observed.

A fleet of huge gas guzzlers followed the ‘honourables’ to the dais, where they alighted, surrounded by heavily built men in black suits.

From conversations with residents, expectations had been managed. They wanted to be part of the celebrations if only to share a roof with leaders they only see on media.

Though they reluctantly told the Star the issues they wish political leaders would handle, they didn’t express much hope.

“Water is our biggest problem here in Mwea. We are largely rice farmers and the rains have been unpredictable lately,” resident  Mercy Kamanda said.

“Our harvest has been bad. If we could get an irrigation scheme, our lives would be in order,” she added.

Abishagi Karimisaid they were hoping that the President would release title deeds for a big piece of land that was yet to be handed to to the Lands Registry.

“Many people fought for a chance to be here with the hope of getting the title deeds, we don’t know how long we’ll have to wait,” she said.

Tebere MCA Gudson Muchina said the curfew is the biggest problem and he said it's killing the economy.

“We have seen great infrastructural transformation just prior to the celebration, but the local mwananchi is still suffering. Curfew is killing our economy,” he said.

President Kenyatta promised some sectors stimulus packages to help them recover from the effects of Covid-19 restrictions.

However while the President was still speaking, a male caught the heavy security officers by surprise when he suddenly appeared in the middle of the field, waving two flags and shouting Baba, a reference to ODM boss Raila Odinga.

As the men in black went for him, he kneel down in surrender and was whisked away into a small tent behind the dais. What became of him is anybody's guess.

The President's speech ended in a loud cheer as residents got their greatest wish: No more curfew.

Kamau, a long-serving civil servant feted as a hero on Mashujaa Day.
News
1 month ago

Ruto has not seen eye to eye with Uhuru since the June 1 Madaraka Day celebrations.
News
1 month ago
by AKELLO ODENYO and WANGECHI WANG'ONDU
News
21 October 2021 - 06:35