Uhuru made the announcement during the 58th Mashujaa Day celebrations

• Uhuru announced Kenya, as of Wednesday, had vaccinated five million adults noting as well that the rate of Covid-19 had decreased over the last two weeks, characterised by a positivity rate of below five per cent. 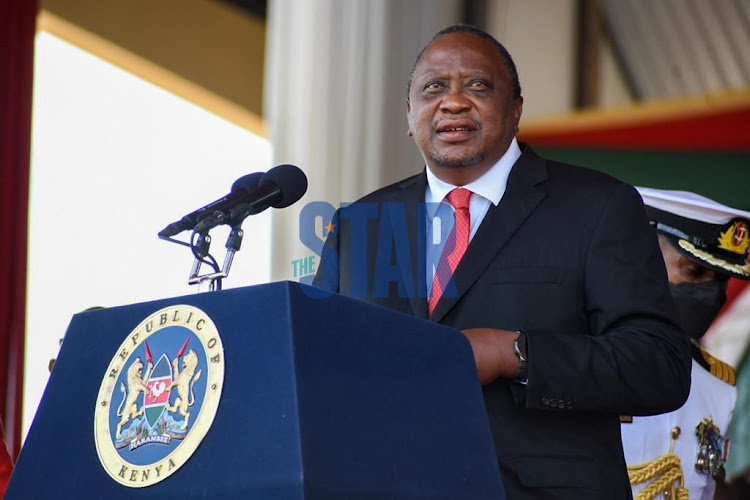 Uhuru made the announcement on Wednesday during the 58th Mashujaa Day celebrations at the Wang'uru Stadium in Kirinyaga county.

"I hereby order that the nationwide dusk to dawn curfew that has been in effect from March 27, 2020, be and is hereby vacated with immediate effect," Uhuru announced amid rapturous applause from those in the stadium.

Uhuru announced Kenya, as of Wednesday, had vaccinated five million adults noting as well that the rate of Covid-19 had decreased over the last two weeks, characterised by a positivity rate of below five per cent.

"I want to thank the people of Kenya for exercising an admirable degree of civic responsibility in this fight and truly being their brothers' keepers," the President said.

However, Uhuru cautioned the country is not yet out of the woods yet and appealed to Kenyans to continue to observe the Ministry of Health containment measures.

The National Emergency Response Committee on Covid-19 and the National Security Council, have continued to monitor the evolution of the disease situation within our borders. Therefore, given the progress made in containing this disease the Committee jointly with the Council has recommended a review of the existing containment measures

The President also announced a review of the number of persons gathering for in-person worship upwards from one-third of the congregants to two-thirds provided they adhere to all the health protocols.

Among those who had made a passionate appeal to the President to lift the curfew were the restaurant operators.

The Pubs, Entertainment, and Restaurants Association of Kenya (PERAK) said the entertainment sector has been sidelined as others benefit from the relaxed Covid-19 containment measures.

PERAK Nairobi Chapter chairman Frank Mbogo said players in the sector are convinced that it is time to lift the curfew and other restrictions that have resulted in the loss of jobs in the sector.

Covid-19 infection rates have been below five per cent over the last three weeks and increased vaccinations have given hope that the pandemic could slow down substantially.

“There has been a rapid increase in vaccinations across the country and there is an evident effort to not only get more vaccines in the country but to get them to more people,” said Michael Muthami, PERAK national chairman.

Muthami said many bar and restaurant operators continue to suffer harassment at the hands of the police as they enforce the protocols.

“The entertainment sector remains the only one facing restrictions as all other sectors are open. Matatus are operating at full capacity, supermarkets and other markets are open and churches are open and functioning normally,” said Muthami.

The operators’ call came a day after Uhuru hinted the curfew could be lifted soon.

More than 15,000 bars and restaurants have been shut since the onset of the pandemic, rendering an estimated 90,000 workers jobless, according to PERAK.

Excise revenue levied on beer, wines and spirits was reduced by 19 per cent in 2020, with the decline attributed to the impact of the restrictions on sale of alcohol compounded by the increase in excise taxes.

“Our appeal now is to the President to allow us to resume work so that we can continue contributing to the country’s economic growth. We are not even talking about an extension of the hours but about full reopening,” said Simon Njoroge, chairman of the Bar, Hotel and Liquor Traders Association.

Restaurants had been allowed to operate up to 9 pm.