WILL BRING KENYANS ONBOARD

DP Ruto: This is what bottom-up economic model means

Says the trickle-down approach has failed because it bred cartels

•The bottom-up economic framework is anchored on a deliberate program that promotes investments. 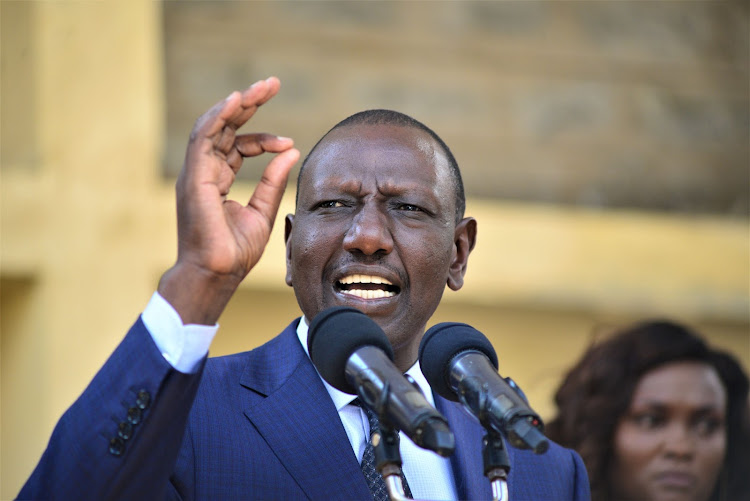 The bottom-up economic model is a blueprint targeting to promote investments of ordinary Kenyans and empowering them financially so the country can generate taxes to spur the economy, Deputy President William Ruto has said.

Responding to critics of his “hustler's economic model”, a philosophy that is a cornerstone of his 2022 presidential campaigns, Ruto said the trickle-down approach has failed because it bred cartels.

He said it has failed since it aids patronage and cronyism that breeds cartels and monopolies that benefit a few.

The bottom-up economic framework is anchored on a programme that promotes investments and financial instruments that target millions who are unemployed, hustler enterprises, farmer groups and fishermen, the DP wrote on his social media pages on Thursday.

“The conversation has changed,” he said.

Ruto is rallying supporters around his hustler narrative, which he says is a “bottom-up-middle-out economic approach” that has been received with admiration and criticism in equal measure.

His supporters think it is the solution to bridge the widening gap between the rich and the poor while critics including former Prime Minister Raila Odinga have rubbished it saying it is a copy and paste manifesto of the ODM party.

Raila and ANC leader Musalia Mudavadi, who are both presidential aspirants in next year's general election, have also anchored their campaigns on the need to reconfigure the economy.

The DP has in his public rallies insisted that trickle-down economics has been practised in Kenya for a long time, and it is time to move to the bottom-up approach which will bring onboard all Kenyans.

Ruto says the model has the answer to the country's economic woes as it will help more than 15 million jobless Kenyans.

In May, Ruto pledged to implement to the letter the 'hustlers' economic blueprint that is to be unveiled in December.

“I will work hard to implement every aspect of what I am pledging. The bottom-up economy will work and must work, this I can assure Kenyans and I will be accountable to them,” he told the Star at his Nairobi office on May 4.

Post a comment
WATCH: The latest videos from the Star
by GIDEON KETER Political Reporter
News
30 July 2021 - 07:10
Read The E-Paper