Where shall we as a country and continent fall in emerging groupings?

• Russia's Sputnik V and America's Pfizer are going to be your leading vaccines soon.

• AstraZeneca has already been given a bad name even though the vaccine is not harmful — WHO and other experts and regulators have assured us so. 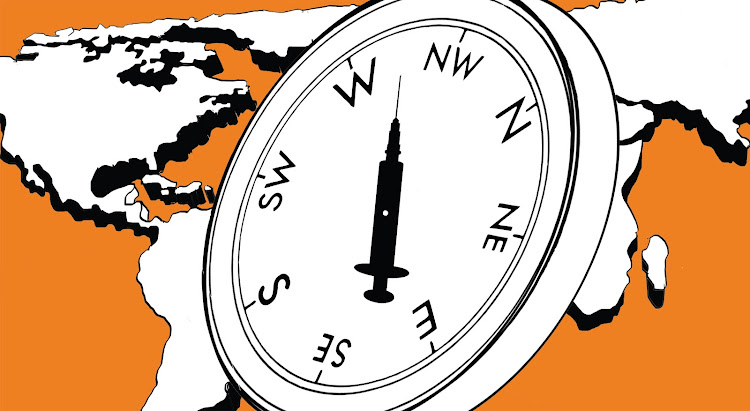 VACCINE ALLIANCE: The Covid-19 crisis and vaccine diplomacy will give rise to new global alliances.
Image: THE STAR

Covid-19's arrival is so cataclysmic that it may rival the Spanish flu.

History has taught us any catastrophic global event has ended in a major change of the world order.

Right from Europe's Thirty Years War that led to the establishment of nation-states through the Westphalia Treaty to the fall of the USSR, the relationships among states are often shaped by catastrophes.

So will the coronavirus change a thing in the international relations among states? Certainly, yes.

World War I gave us the League of Nations, what is today known as the United Nations.

The UN, depending on what side you argue from, has its fair share of praise and blame, thus shaping much more of the world today.

Alliances took shape, nation-states related much more differently than they did earlier under the League of Nations.

The friendship between the UK and the US was cemented during this period.

When World War II ended, new world order was birthed. A bipolar system was here with us for decades again. It is during this time of power rivalry between the Kremlin and the White House that Africa suffered the most.

The black land became the battleground for the Cold War.

To date, the effects of the Cold War proxy wars are still glaring at Africa. As the Iron Curtain fell in Germany and the USSR could no longer hold, a new unipolar world order emerged and America became the superpower.

Though some chose to remain non-aligned by coalescing around one another — the Non-aligned Movement — in operations, they owed their allegiance to either the US or the Soviet Union.

This certainly points to another shakeup in international relations, at the centre of it being health diplomacy during the Covid-19 pandemic. You've got to prepare for the unknown.

Until September 11, 2001, terrorism wasn't as much talked about as it is today.

Though it was a growing concern, it had not hit rock bottom as it did on that day.

When airliners crashed into the Twin Towers and the Pentagon was hit, it was the height of terrorism and a global turnaround took place in the manner it was handled from that point.

It became the top of the security and foreign policy agenda.

With the pronouncements of President George Bush that "...you are either with us or against us..." at the White House's Rose Garden, every nation made an effort to identify with the US.

Not because they wanted to but because the consequences of being against it would be too catastrophic.

Saddam Hussein, Muammar Gaddafi and Osama bin Laden could be having this conversation somewhere by now.

Sudan, a long-time antagonist of the US through Omar al Bashir, immediately softened her stand, Gaddafi offered to destroy his nuclear weapons and the House of Saud cooperated so quickly as Saddam's rigidity painfully did him in.

Most states forged an alliance with the US, including long-standing terrorists sympathisers.

They had only one option left — trust and obey or otherwise be crushed.

When Wuhan city hit headlines across the globe in December 2019, many thought China, with its advanced technology and manpower, would contain the virus.

China through her infrastructure technology almost made us believe that all is possible for Beijing to save for the breath of life. That would not be the case.

More than 129 million people have been infected, 2.8 million others have since perished globally, and hospitals are running out of oxygen and ICU beds.

More than half a century after independence, no African country is yet to manufacture its own vaccine. The best we can make is some herbal Malagasy drink to deal with the virus!

Now America, the UK, Russia, India and China have produced some of the leading vaccines sought after globally.

Two key things to take note of are that each country producing the vaccine is in a rush to vaccinate its own population.

They also are trying to outdo the other manufacturers in philanthropy by donating to the poor developing nations or selling at relatively affordable prices.

However, India and China's efforts towards vaccine diplomacy seem to have fallen flat. Could prioritising other nations at the expense of their own huge populations have proven counterproductive?

Russia's Sputnik V and America's Pfizer are going to be your leading vaccines soon. AstraZeneca has already been given a bad name even though the vaccine is not harmful — WHO and other experts and regulators have assured us so.

I can only conclude that giving the vaccine a bad name, was only meant to push the UK out of the global power politics equation.

Shall Russia penetrate the African population with Sputnik V as it has successfully done in South America?

The vaccine diplomacy has just begun and since most diplomatic engagements now cannot pass without the Covid-19 vaccine and containment being a subject of discussion, he who appears to offer a solution to the pandemic will finally have a huge say and influence moving forward.

Vaccine alliances shall soon form and without a doubt, they shall go a long way beyond Covid. Where shall we as a country and continent fall?