• Uhuru therefore said the Government will continue implementing programmes aimed at nurturing its growing scientific talent pool so as to create wealth and expand employment opportunities for Kenyans.

• The head of state spoke on Friday during the 50th anniversary celebrations of the International Centre of Insect Physiology and Ecology (ICIPE) in Nairobi. 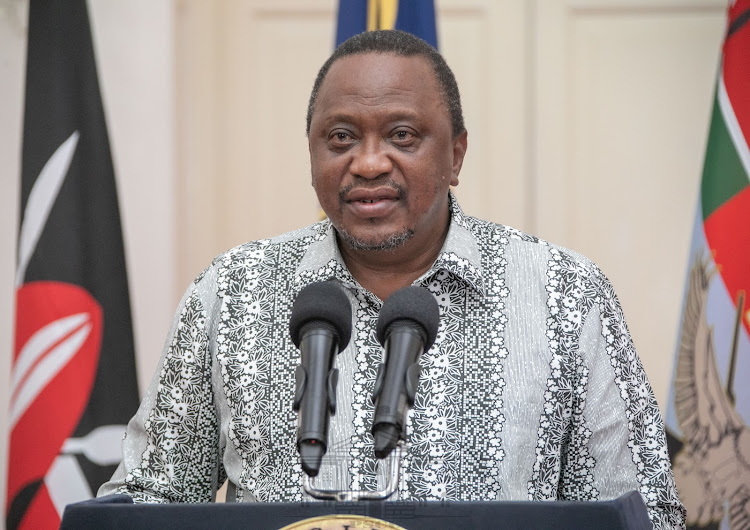 President Uhuru Kenyatta spoke on Friday during the 50th anniversary celebrations of the International Centre of Insect Physiology and Ecology (ICIPE) in Nairobi.
Image: PSCU

President Uhuru Kenyatta has said science and research are key to unlocking Kenya's development potential especially in finding solutions to challenges slowing down the country's progress.

Uhuru therefore said the Government will continue implementing programmes aimed at nurturing its growing scientific talent pool so as to create wealth and expand employment opportunities for Kenyans.

The head of state spoke on Friday during the 50th anniversary celebrations of the International Centre of Insect Physiology and Ecology (ICIPE) in Nairobi.

In his pre-recorded video address, Uhuru applauded ICIPE for its prominent contribution to the growth of science and research in Africa over the last five decades.

“As this pioneering institution commemorates its 50 years of service, in partnership with governments across the continent, we note with appreciation the central role you have and continue to play, in insect research, plant health, animal health, environmental health, all aimed at bettering human health and welfare,” Uhuru said.

He said Africa must continue to expand its investment in science and research for it to achieve the aspiration of becoming a prosperous and peaceful continent.

“Indeed, Africa will continue to rely on scientific organizations not only to address present and future development challenges, but also to provide the platform upon which we may be able to take advantage of the emerging opportunities in the digital and the biological economic sectors,” he said.

The President praised ICIPE's training programmes delivered through the African Regional Postgraduate Programme in Insect Science (ARPPIS) and the Dissertation Research Internship Programme (DRIP), saying the initiatives have helped to significantly increase the number of scientists and researchers in sub-Saharan Africa.

“Likewise, I note with appreciation that in 2008, ICIPE was selected by African governments to run the Regional Scholarship and Innovation Fund (RSIF) of the Partnership for Skills in Applied Sciences, Engineering and Technology (PASET).

"The central objective of this Fund is to train up to 1,000 doctoral level scientists annually from sub-Sahara countries in the various core fields of science,” he said.

Uhuru said Kenya's Vision 2030 and the African Union Agenda 2063 both recognize the vital role played by science and scientific organizations like ICIPE in achieving developmental objectives.

With this knowledge, the President said his administration will continue working closely with scientific and research organizations as key development partners adding that the Kenyan Government had contributed more than Shs 200 million to the Regional Scholarship and Innovation Fund (RIF) of the Partnership for Skills in Applied Sciences, Engineering and Technology (PASET) where he is the current Chairperson.

“Our contribution in this regard is consistent with the Kenya Vision 2030, the UN Sustainable Development Goals and the Africa Union Agenda 2063,” he emphasized.

The Head of State assured that the Kenyan government will continue rolling out progressive policies to promote science and innovation, not only as the engine for economic growth but also as a means of addressing enduring social inequalities.

“We have made a commitment to invest up to 2% of our annual national budget in research and innovation which is in line with our national development programmes,” he said.

Uhuru noted that science and research institutions such as ICIPE are important partners in realizing Kenya's development aspirations as outlined in Vision 2030 and Big 4 Agenda blueprints which he said are consistent with UN Sustainable Development Goals.

“Indeed, ICIPE and other similar organizations in Kenya have contributed essential technical skills and scientific knowledge that have proved invaluable to our national development.

“These contributions have led to the creation of high quality jobs, especially for young graduates, increased foreign exchange earnings for the country and strengthened our connections, particularly in the field of academia and research, with the rest of world,” he said.

As part of the celebrations, the president launched ICIPE’s Vision and Strategy for the period 2021 to 2025, which he described as bold and comprehensive noting that it will position the organization as a centre for discovery and provision of solutions.

Foreign Affairs CS Raychelle Omamo and Agriculture CS Peter Munya commended ICIPE for its scientific and research work which they said has been key in transforming the lives of many Africans.

Munya said ICIPE has been recognized globally for its research work, which has greatly helped farmers to improve productivity of their enterprises.

“This work has made ICIPE to be a household name in Africa, for it has contributed to providing solutions which are not harmful to animals, plants and human life,” Munya said.

Kitui beekeepers urged to use biopesticides for high quality honey