State will not compensate Mau evictees 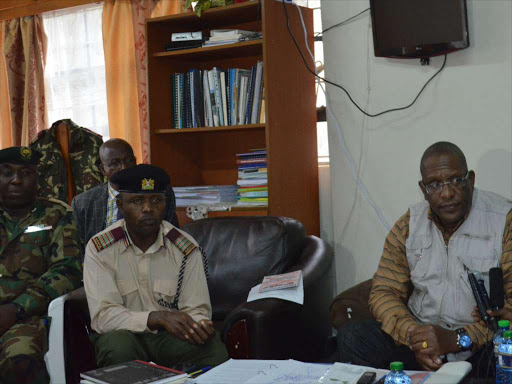 The government will not compensate the Mau evictees for crime they committed in the water towers,Environment Cabinet secretary Keriako Tobiko has stated.

Addressing the press after meeting with Narok County security team, Tobiko ruled out the question of compensating anyone saying that the Mau issue is a monumental crime.

“There is no big crime ever committed in this country than the Mau issue. This is a monumental crime, marked with greed and impunity. You cannot pay people for crime. In fact, the government is being lenient. In normal circumstances, it jails people for crime.” Said Tobiko.

He named the purported title deeds as null and void, terming them as mere papers, while naming those claiming to be victims of duping as conspirators who deserve no mercy.

‘’No one can make a valid voice of compensation. How can one even make a case or even argue that they were duped? How can you claim that you did not know that it was forest land?”Posed Tobiko.

The CS affirmed that there is no negotiation about the Mau, terming it as important to negotiate about.

Tobiko said the Mau has been a subject of five task forces, including the current one, all of which agree that all settlers in the forest should be removed.

He defended phase one of the evictions saying they were handled in the best way possible, in what he called a judicious manner.

He dispelled ongoing talks that the Mau evictions are about 2022 succession politics stating that the Mau is not about Kenya but the whole of the East African region.

“This is not about the Maasais and the Kalenjins This is a matter of life and death. This is an ecological catastrophe that we are all trying to salvage. This is beyond us. This is about the whole of East Africa.” He said.

Keriako put on notice former officials of the five group ranches and extended the alert to those of Olkurto and Nkareta, saying that they must be held accountable for the destruction of the Maasai Mau.

Tobiko further appealed to those who have title deeds to surrender them for cancellation, stating that they are no value to them but they are of value to conservation.

‘If you surrender the title deeds, it will be confidential, we are not interested in messing up individuals lives. Even to public servants who are beneficiaries of the Mau should do the honorable thing and surrender them to the county commissioner, failure to which, we will seek the EACCs intervention.” Declared Tobiko.

The CS revealed that out of the 716 originally issued title deeds, only 461 have green cards. The rest are fakes. 4,500 households have sale agreements while 2500 have absolutely no documentation.

Keriako has called on those without documentation as squatters and trespassers who should not wait for the government to catch up with them.

“If you bought land from anyone, including these group ranches, come out and present yourself to the county commissioner. We will use those documents to trace those who knowingly duped you and have them return your money or resettle you in their own land.”

The CS has also revealed that three title deeds whose total acreage is 170 acres have been surrendered already and the land officially reclaimed.

On his part, Narok county commissioner George Natembeya said that is in possession 23 title deeds without their bearers asking for any compensation. The acreage under the 23 titles is 1084 hectares.

The CS has also confirmed that narok county government is in the operation to reclaim the forest, contrary to claims that it was not involved.

“The county government of Narok has been so supportive in the efforts to reclaim the forest. They have supplied their own forest rangers and additionally supplied those in the operation with logistics.” Said Tobiko.

Post a comment
WATCH: The latest videos from the Star
by By KIPLANG'AT KIRUI @kiplangatkirui
News
18 August 2018 - 07:00
Read The E-Paper