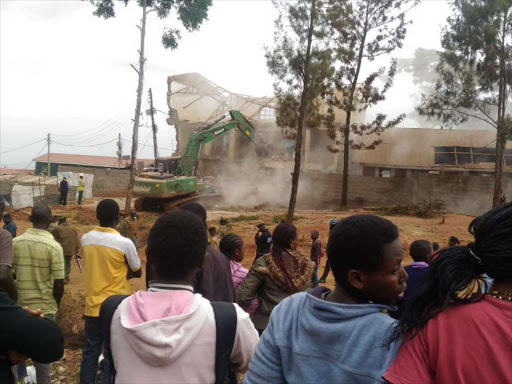 Amnesty International and Kenya Urban Roads Authority on Monday engaged in a spat over demolitions that will pave way for Kibera link road.

Amnesty has asked the government to stop the evictions on grounds that it violated the agreement reached with the occupants of the affected dwellings.

Via Twitter, the rights body said: "Tragically and illegally, [Kura] this morning violated the agreement reached with the community.

To the lobby group, demolitions prior to the completion of the plan amounted to betrayal of public trust and violation of the law.

"The #KibraForcedEvictions must be halted and due process followed," it said.

In its response, Kura said:

"Kindly note that the RAP was completed on Friday and that about 2,000 households occupying a space of 10 acres out of 600 acres are affected. Stop lying for fundraising sake."

Amnesty hit back at Kura saying: "Get to know us. We don't raise money off your actions or lack of. Perhaps, we could also recommend a course on polite public communications."

Kibera residents on Monday woke up to an unsightly experience as they watched government bulldozers flatten what they had called home for years.

The demolitions started at about 6 am and saw NYS bulldozers flattened everything in sight to pave way for the construction of a link road.

Works on the link passage that connects Langata Road and Ngong Road had stopped as the 600m stretch was yet to be cleared.

The National Lands Commission said the lot will be given goodwill stipends to enable them move out and settle elsewhere. The notice of eviction expired on July 16.