Only monkeys 'studying' in universities, Uasu says as strike bites 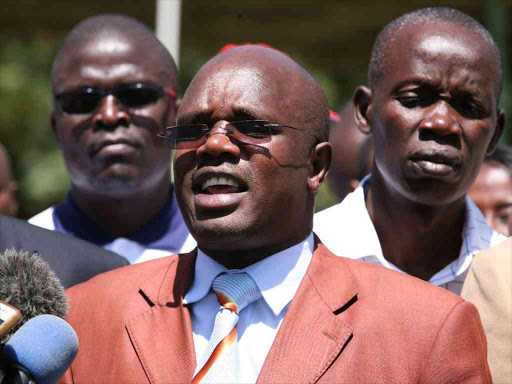 Negotiations to end the lecturers' strike collapsed last week after the government declined to accept demands, a union boss has said.

Constantine Wasonga, secretary general of the

and that learning was so paralysed that

demanding the negotiation, signing, registration and implementation of a CBA for 2013-2017. Fears of losing the agreement became eminent with the end of financial year 2016/17 approaching.

Forum to give them a new offer but were instead given a presentation on how a previous offer was reached.

The dons rejected the government’s offer of Sh10 billion terming it inadequate. They said it only translated to a three percent increment in their basic salaries and a 1.6 per cent increase in house allowances.

Wasonga also said that during last week's negotiations, they demanded

that the government provide a letter of authority from Treasury concerning committed money but that this was not given.

He said they also wanted

the payment structure for public universities across the country, including the total number of academic staff in all the institutions,

as proposed by the SRC.

The secretary general said the government was not open during negotiations and maintained that the documents they demanded were private and confidential.

He added that they had not received any other invitation for talks from the government.

“We won’t settle for anything less than a 30 per cent increment on our basic salaries and a 20 per cent increase in housing allowances. We are free and available for the talks...anytime they call us we will go," he said.

But he added when the lecturers met at Maseno University on Monday:

“I will not append my signature to an inferior CBA. So you think my signature is not the one that is private and confidential."

Wasonga said they will not engage the government in issues that are not part of their CBA, which he noted was not just about money.

He said lecturers must work in conducive environments and that it was time they reclaimed their lost glory and fought their rights by rejected "forced labour and slave wages".

take charge of the sector and ensure it does not collapse, he added.

The CS asked lecturers to suspend their strike until March 1, a time by which he said talks will have been completed.

He asked Vice Chancellors not to take any disciplinary action against the lecturers.

Matiang'i also said the ministry, Treasury and the Salaries and Remuneration Commission would participate fully. He added that

lecturers were not government employees and that the government would support their councils.

lecturers' strike will continue until their Collective Bargaining Agreement is fully implemented.

He refuted claims that learning was taking place in some institutions saying the strike had paralysed this.

Wasonga said the propaganda was being spread by university management to weaken the nationwide strike.

“That is propaganda [aimed at making the strike seem petty and less serious]. The last time I was in Maseno I only found monkeys learning on the streets. The lecture halls were empty and this is the same for other universities," he said.

“I have visited Rongo, Maseno and Masinde Muliro universities so far and I have not seen any teaching going on as suggested by some sections of the media. I will visit more universities to see where teaching is taking place. Those propagating this rumour should stop lying."

Learning in all public universities has stalled despite attempts by university senates to call students and lecturers back.

The deal lecturers rejected last week would have seen the lowest paid assistant lecturer earn Sh91,593 and the highest paid getting Sh240,491 a month.

justice Hellen Wasilwa of the Employment and Labour Relations Court

She also directed parties to

Post a comment
WATCH: The latest videos from the Star
by FAITH MATETE, @faymatete and LEWIS NYAUNDI, @X_nyaundiH
News
20 February 2017 - 15:00
Read The E-Paper