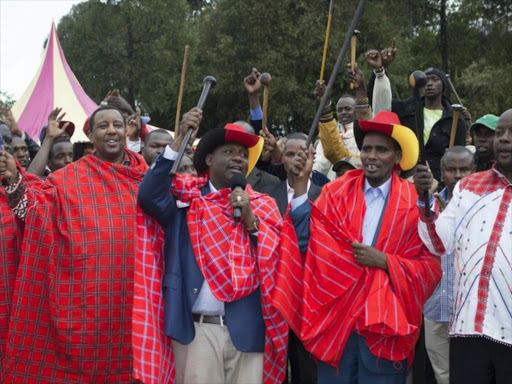 President Uhuru Kenyatta and Deputy President William Ruto have received a major boost after 40,000 people from the populous Purko clan of the Maasai community endorsed their reelection.

They also endorsed the reelection of Narok Governor Samuel Tunai.

The declaration was made in Motonyi village, Narok North subcounty, on Saturday. Among those present were Narok South MP Korei ole Lemein, Agriculture PS Richard Lesiyampe and Tunai.

Geothermal Development Company CEO and managing director Eng Johnson ole Nchoe, who organised the meeting, asked his supporters to back the Jubilee Party, saying the Maasai community will benefit if they are reelected.“Narok is a Jubilee zone and we will ensure the party scoops all the seats in the region,” he said.

Nchoe thanked the Jubilee administration for appointing people from the area to various posts in the government.

“As a community, we are privileged to have a Cabinet Secretary post, several Principal Secretary positions, CEOs, several high-level government positions, board posts, and other senior state jobs,” he said.

Nchoe urged the Maasai community to remain united and maintain the peace in the run-up to the August 8 general election.

“While we may not always see things the same way, we have always focused on the things that unite us. And when, on rare occasions, differences arise, we have our cultural mechanisms that can help keep us united. Even as we approach the next election, let us remain true to the Maasai spirit. It is the spirit of peace and brotherhood,” he said.

Nchoe vied for the county governor’s position in 2013 and came third with more than 40, 000 votes. He was behind Governor Tunai and Joseph Tiampati.

Tunai warned the Maasai community against falling for the opposition’s “propaganda” that the government has not fulfilled the pledges it made to the people in the run-up to the 2013 polls.

The governor said the opposition led by ODM leader Raila Odinga and Wiper’s Kalonzo Musyoka has nothing to show to Kenyans, saying they have been in government for many years.

Tunai also said the Jubilee administration has made major strides in resolving the perennial land problems in the county.

He said many residents have been issued with title deeds in areas such as the Kipise Group Ranch and Ong’ata Naado.

“The Jubilee administration’s development record for the Maasai people speaks for itself. When we talk about rural electrification, Jubilee has connected more than 42,000 households to the national grid. The previous governments only managed to connect 7,000 households,” Tunai said.

Lemein said Narok county is not up for grabs as it is a “Jubilee zone”.

Post a comment
WATCH: The latest videos from the Star
by KIPLANG'AT KIRUI @KIPLANGATKIRUI
News
20 February 2017 - 02:00
Read The E-Paper