Study shows an overall medication error rate of 75.8 per cent in a Kisii hospital in 2014 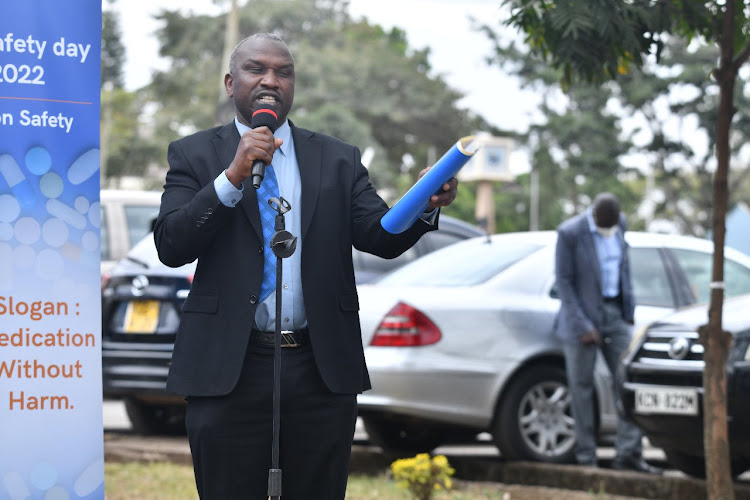 Local health workers have been challenged to help reduce a growing burden of patients harmed by improper medication.

Globally, half of all preventable harm in medical care is medication related, a quarter of which is severe or life-threatening, the World Health Organization says.

Health facilities in Kenya do not investigate medication errors.

Health Standards and Quality Assurance acting director Dr Simon Kibias said there is a need to prioritise patients’ safety while practising empathy towards them.

“Medics must let the patient focus be at the core of their duty. We must strive to put a smile on our patients,” he said.

World Patients’ Safety Day aims to raise global awareness of the high burden of medication-related harm as a result of medication errors and other unsafe practices.

WHO says the elderly population is one of the most at-risk groups for medication harm, especially those taking multiple medications.

WHO director general Dr Tedros Adhanom Ghebreyesus said, "medicines are powerful tools for protecting health. But medicines that are wrongly prescribed, taken incorrectly or are of poor quality, can cause serious harm."

“Nobody should be harmed while seeking care,” he said in a statement released ahead of the day.

Medication error refers to the unintentional errors in the prescribing, dispensing, administration or monitoring of a medicine while under the control of a healthcare professional, patient, or consumer.

They happen due to systemic issues or human factors such as fatigue, poor environmental conditions or staff shortages.

This affects prescribing, transcribing, dispensing, administration and monitoring practices. These errors can result in severe harm, disability and even death.

Few studies have comprehensively examined the burden of medication errors in Kenya due to lack of data.

However, in 2014, Dr Christabel Khaemba, then a student at the University of Nairobi, reviewed medical records at the Kisii Level 5 Hospital paediatric wing.

Out of 405 treatment sheets and files reviewed during the study, 307 contained errors yielding an overall medication error rate of 75.8 per cent with the total number of medication errors observed being 1,023.

These errors were classified into various categories as documentation errors (73.9 per cent) which were more frequent, followed by dosing errors  (8.8 per cent), monitoring errors (8.6 per cent) and timing errors (5.7 per cent).

The medication errors occurred more frequently in male children (41.2 per cent), children less than one year (45.9 per cent) and in those admitted to the general paediatric ward (48.4 per cent).

“Despite the fact that majority of errors observed were less likely to cause harm, some can be potentially fatal and therefore there is need for hospitals to have strategies of detecting and minimising the errors,” she said.

Unsafe medication practices and medication errors are one of the main causes of injury and avoidable harm in healthcare systems across the world, WHO says.

The global cost associated with medication errors has been estimated at US$42 billion (about Sh5 trillion) annually.

Only 1.3% of medical laboratories conduct any bacteriology testing in Africa.
News
2 weeks ago

Kenya targets to collect 200,000 units of blood before December

Says drugs used to prevent the infection were being confused for similar drugs to prevent HIV.
News
1 month ago
Post a comment
WATCH: The latest videos from the Star
by JOHN MUCHANGI Science Editor
Health
18 September 2022 - 23:00
Read The E-Paper