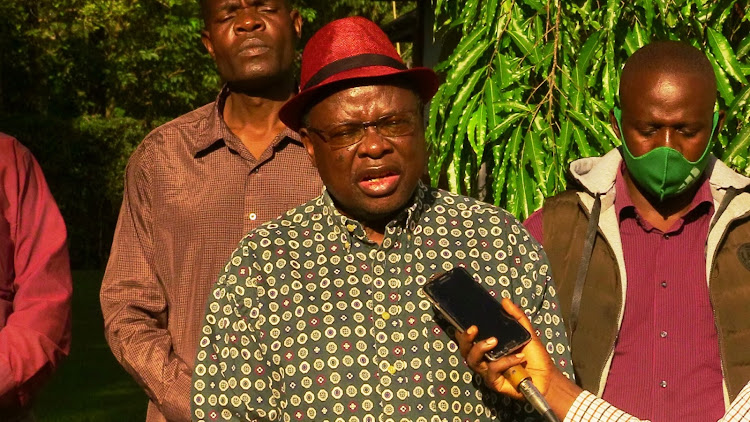 Nambale MP John Bunyasi has challenged the National Treasury to explain to Kenyans how it intends to service the ballooning debt.

The MP at the same time asked Treasury Cabinet Secretary Ukur Yatani to assure Kenyans that as the Treasury grapples with servicing the over Sh7 trillion debt, delivery of vital services will not be hampered.

Kenya’s debt crossed the Sh7 trillion mark last year, or 65 per cent of GDP, up from Sh5.81 trillion the previous year.

“Kenya is facing a very difficult time and we want the government to tell us how it plans to service the debts we have accumulated so that the economy does not suffer and life at household level is not affected,” Bunyasi, an economist, said.

“We are worried because prolonged servicing of debts will take away money that we would have spent in developing sectors like health, agriculture, information communications and technology, transport and other things that are very vital for any country.”

Analysts have said growth in public debt has partly been driven by over-budgeting, leading to ambitious tax targets, which have largely been missed.

Bunyasi said the huge debts the country has accumulated, coupled with the Covid-19 pandemic and its effects on the already fragile economy may worsen Kenyan’ lives.

He called on MPs to shun individual and partisan interests and prepare the 2021-22 national budget with focus on channelling money into sectors that directly help Kenyans create wealth. This, he said, will cushion Kenyans from the shocks that may accompany any decline in economic growth.

“As MPs, as we prepare to make the 2021-22 budget, we need to critically look at what we can do to make sure that the budget directly helps ordinary Kenyans put more money into their pockets.

“Through this, they will be able to increase demand for services like medication, transport, food, school fees among other things. This will intern lead to economic growth and development.

“Before the Cabinet Secretary for Treasury tables budget estimates for 2021-22 Financial Year in Parliament, he should be able to show us that the next budget is one that will address the problems we are facing as a country now,” he said.

Last Friday, the International Monetary Fund approved yet another loan facility worth Sh255 billion for Kenya, sparking public outrage. About 200,000 Kenyans have petitioned the IMF not to give the government any credit.

Economists have warned that unless the government quickly renegotiates with its financiers to reschedule some huge loans, an economic recession would be inevitable.

Bunyasi, who doubles as a public policy analyst, said at the rate at which the Jubilee administration is borrowing, the country, may reach a stage when Kenyans will be unable to pay for critical services as most money will be directed towards debt servicing.

When President Uhuru Kenyatta took over the presidency in March 2013, the public debt stood at Sh1.7 trillion. The debt shot up to Sh1.8 trillion by June the same year.

However, the Jubilee administration, which started its ninth year in office last March, is projected to push the country's public debt to Sh7.8 trillion by June this year.

According to the 2021-22 Budget Policy Statement, Uhuru’s administration will in the next financial year break the Sh9 trillion budget ceiling set by Parliament, worsening the debt burden on Kenyans.

The Treasury is already pushing to raise the debt ceiling to Sh12 trillion by next year to accommodate the anticipated borrowing to fund the 2021-22 budget.

The total public debt was tracked at Sh7.35 trillion in January, according to the Central Bank of Kenya. The external debt is currently Sh3.8 trillion while domestic debt is Sh3.5 trillion.

In the latest loans, the government has acquired Sh255 billion from the IMF reportedly to bridge the gap in fighting the Covid-19 pandemic.