Woman ordered different items on the menu and expensive drinks.

• James Owiti said that he was tempted to run away after the lady disappeared with his cards, mobile phones and some money that was in his pockets leaving exposed to the management. 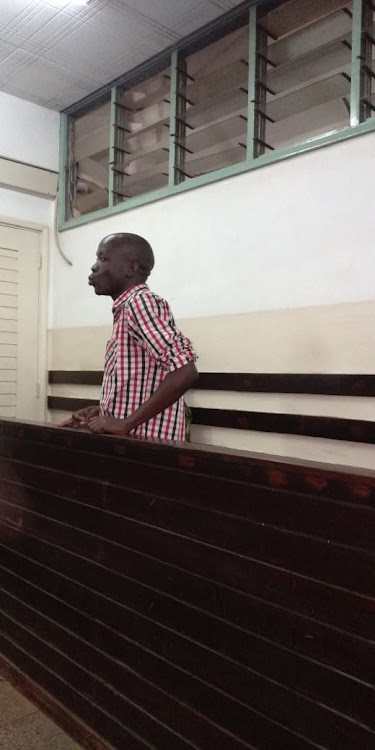 Owiti in a Kibera court yesterday He admitted stealing trying to escape after he failed to pay Sh 8100 hotel bill
Image: CLAUSE MASIKA

A computer technician yesterday admitted to a Kibera court that he tried to escape after a woman he took out to a hotel drew a bill of Sh 8100, money could not afford to pay.

James Owiti who was charged with skipping to pay a hotel bill told Kibera Senior resident magistrate Barbara Ojoo that the lady forced him to Gibson’s restaurant located in Dagoreti because she only liked hotels for “first-class people.”

He said the lady then ordered different items on the menu and expensive drinks without asking him the amount of money he had.

Owiti said that he was tempted to run away after the lady disappeared with his cards, mobile phones and some money that was in his pockets leaving exposed to the management.

“Madam she ordered John Walker, wines, grilled pork, high-class chips which she called chips masala, among other foods stuffs. I only rejected her idea of requesting pizza,” he told the court.

He said that he could not deny the lady’s request for food as she kissed him many times and showed him love.

Owiti is said to have committed the offence on June 18 within Nairobi county.

According to prosecution, he tried to run away after the hotel attendant asked him to pay the bill.

The prosecution alleged that at first, he together with the lady, said that they would pay the bill after eating.

But when asked about the bill, the accused changed and tried to sneak out of the hotel.

The hotel attendant called a security guard who arrested him and took him to the Parklands police station where he was held before being arraigned.

On his mitigation's, the accused told court that his former wife died some years ago and he tried to fix the love holes but seeking love from a stranger.

He asked Court to forgive him as the lady made him drunk and stupid but vowed not to love strangers again.

The magistrates told him he could have told the hotel management that he had no money so that he is given a job like washing utensils.

Owiti was ordered to pay Sh20,000 fine or serve three months in jail.