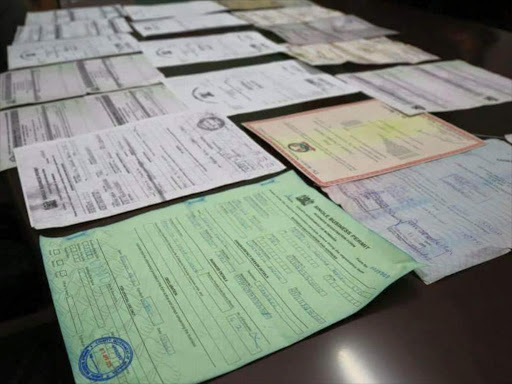 A display of fake documents./FILE

According to the DCI, detectives working on information from the public arrested Peter Nyabogoye Kaunda,25, at Sir Yusuf club in CBD.

Among the items confiscated from him are a copy of medical examination form, KDF calling letter for January 2019, a copy of police clearance, a copy of Her Majesty's Armed Forces Application to Service form and a copy of an unknown recruitment format application form.

He will be charged with making documents without authority.

In another incident, detectives have arrested a gang of four, two men and two women suspected to have been waylaying people coming from banks and robing them of their cash and valuables in Kajiado county.

The DCI has posted their photos on his twitter page asking any one who may have been robbed by them to report to the nearest police station.

Meanwhile, detectives working on information approached a gang of two men armed who were robbing members of the public in Kayole, Nairobi county.

The armed men were challenged to stop and surrender but instead they started firing at the officers.

The detectives returned fire killing one before recovering a pistol with one round of ammunition. The others one escaped.