Alarm over increased drugs use among students in Mombasa 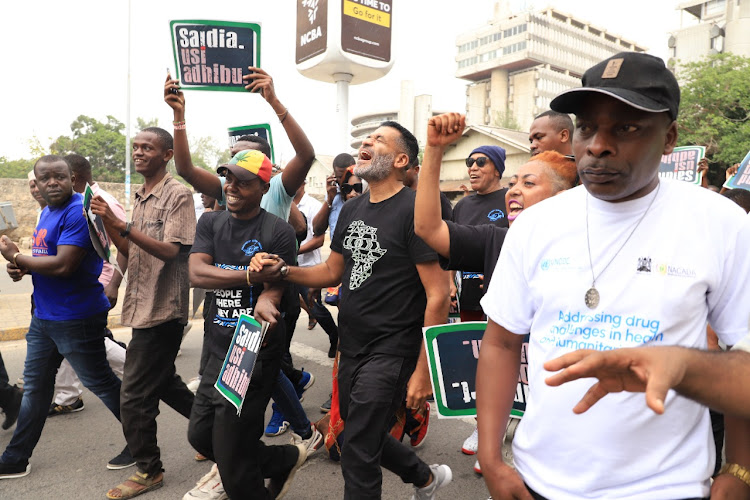 Mombasa governor candidate Abduswamad Nassir (in a black t-shirt with a drawing of Africa) and Mombasa deputy county commissioner Ronald Mwiwawi with a black cap during the procession along Nkrumah Road in Mombasa.
Image: JOHN CHESOLI Security chiefs in Mombasa have raised concern over increased drug and substance use among secondary school students in the region.

Deputy county commissioner Ronald Mwiwawi on Sunday said the drug abuse problem has now shifted from the community to schools.

“Drug abuse in our schools is the main problem we are facing in Mombasa right now. Young people are carelessly engaged in drug use,” Mwiwawi said at the Treasury Square, Mombasa, during a celebration to mark  International Day against Drug Abuse.

He said matatu drivers are also colluding with students to supply drugs to the institutions.

“We have specific vehicles that only carry students. They do not carry any other passengers. These matatus are used for drug trafficking business and if action is not taken now, we are going to lose a lot more children,” he said.

He said that his office has started a programme of creating awareness in schools to help the students understand the effects of drugs in their bodies.

“Mapping has been done which has revealed where drugs are found and the people involved in selling them. We have cases in Makupa Boys where parents are sending their children to buy the drugs,” he said.

The commissioner further said chiefs in Mvita, who are against drug abuse, have become targets by the people involved.

“Do not see the chiefs as your enemies, work with them so that we can remove the rot from the communities.”

Mwiwawi said stern action should also be taken against the wines and spirit traders who do not have valid documents and are selling the drinks to underage persons.

“Most people selling alcohol in Mombasa are not licensed. Children easily access the alcohol and drugs because wines and spirits shops are available near schools,” he said.

He called upon the community to work with county and the national governments to reduce the menace.

“We call for support. Personally, I am ready to work with the government to see Mombasa change.”

Nacada Coast regional manager George Karisa said that, according to their research, drug use starts at a young age of 10 years.

He said the region has really been affected and that at least 13,000 people use heroin.

Karisa said that 29.3 percent of people are using different drugs, including alcohol.

“Mombasa leads in hard drugs and substance usage, bhang and prescription drugs that people are using without doctors’ advice,” he said.

In the region, at least 18,000 people are using injectable drug users.

“Poor parenting has contributed to children engaging in drugs. Parents have left all the responsibilities to teachers," the manager said.

"We need to have time with our children and take up responsibility as parents because this fight against drugs involves everyone.”

“We are working with non-governmental organisations in creating awareness and giving students skills of saying no to temptations of using drugs,” he said.

In Mombasa, there are only three Medically Assisted Therapy clinics, which are located in Kisauni, Likoni and Miritini.

Karisa said there are many people who are not getting treatment, hence the government should prioritise building more rehabilitation centres.

“Mombasa county is still down in provision of treatment. We already have the County Alcoholic Drinks Control Act, but it has not been operationalised. It is a law but it is not being implemented,” he said.

However, Mvita MP Abduswamad Nassir, who is vying for Mombasa governor, said the county has been on the forefront in the fight against drugs.

“Among our achievements is doing lot of outreach programmes in partnership with different stakeholders. We need to give support to the existing rehabilitation centres by ensuring that we remove the methadone fee,” he said.

Nassir said the first thing he intends to do is to ensure methadone centres are available in all the six subcounties and money allocated to support the programmes.

“Through the Bill, which will be subject to review based on the policy, the rehab cost will be subsidised. We will provide doctors, therapists and counsellors who will help in providing the treatment,” he said.

“As an MP, I started a programme called Skills Mtaani, we need to encourage and ensure it spreads in the region.”

Nassir said through the programme, all the key populations will be educated on what they can do to get money and avoid drug use.

“Instead of arresting them, talk to them, support them, but do not punish them both in schools and the targeted areas. We need a law that will help us fight the menace,” he said.

Reach Out Centre director Taib Abdulrahman said out of 10,000 people using drugs in Mombasa, 2,000 have been enrolled in Methadone treatment.

About 1,000 have passed through rehabilitation centres and another 1,000 have gone through psychosocial support. About 2,800 people get nutrition, treatment, counselling, and mental health services.

“We have a big challenge with the policy because our work must be protected and have a backed up by the law," Abdulrahman said.

He said that there is a law that was passed by the national government, but it needs to be reviewed because it does not factor issues of rehabilitation, harm reduction, and socio-economic support.

He said the government took a big step in changing the Miritini National Youth Service into a rehab centre, the first model project under its management in Kenya.

“The facility was opened and has multi-agency support. There is a private-public partnership where civil societies have been given an opportunity in decision making,” he said.