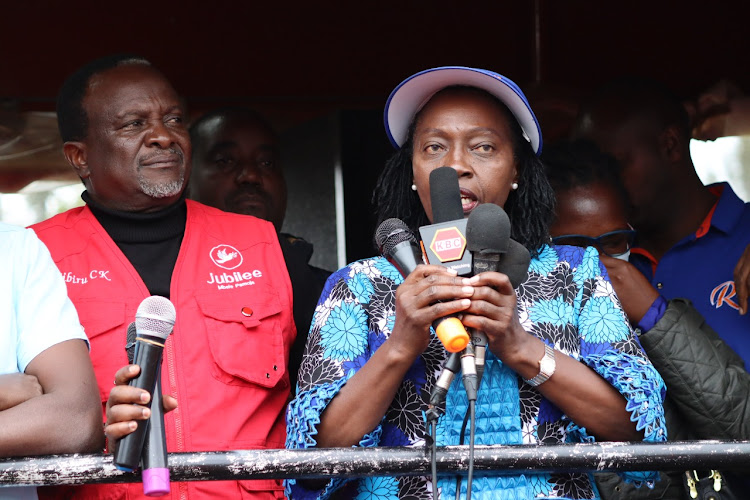 Finally there is light at the end of the tunnel after the Azimio one Kenya coalition settled on Kirinyaga Jubilee governor candidate Charles Kibiru as the coalition's flagbearer.

This is after Narc Kenya's Muriithi Kagai dropped his bid to ensure the coalition consolidates and garners as many votes as possible that will subsequently lead to a resounding victory.

The deadlock was broken after a lengthy push and pull between the two contenders.

During the Azimio coalition final political rally at Kerugoya stadium early last week, the two were ordered to decide who between them would be the coalition’s flagbearer.

Speaking on Saturday morning, the coalition's presidential running mate Martha Karua  hailed the move as he lauded Kagai for his sacrifice.

She called on the residents to overwhelmingly vote for Kibiru even though Kagai's name is already printed on the governor's ballot paper.

She noted that Kirinyaga is not the first case where the coalition's siblings parties have been compelled to get into a consensus in the position of the governor as she cited Embu, Laikipia and Tharaka Nithi.

"We since called for a cease-fire among the contenders vying on affiliate parties under our coalition because we can not afford to divide the votes and eventually lose to our competitors."

She said in Tharaka Nithi and Laikipia counties, Narc Kenya's governor  candidates Mzalendo Kibunjia and  Gitonga Kabugi had since rescinded their candidacies in favour of Jubilee's Dr Erastus Njoka  and incumbent Laikipia Governor NdIritu Muriithi who will vie on a PNU party ticket.

"Let us vote in the coalitions' candidates overwhelmingly so that they can enhance a smooth co-operation  with the Azimio government."

"Our goal is development oriented and is geared towards ensuring there exists a cordial working relationship between the  two levels of government. Let us be cautious in electing reputable leaders with no chest-thumping character and who prioritise the people's needs as opposed to their self-gratification," she said.

She further cautioned voters not to ruin the ballot papers by ticking  more than one mark on the candidates' slots.

Speaking in Kerugoya, Kirinyaga county, Karua further told off their Kenya Kwanza competitors for "using religion as a veil to hide their questionable character".

She said good religion is practiced  through doing good deeds worth emulating and not just just by words of mouth.

"There are those bitter characters perpetuating hatred and yet hiding their rotten image behind religion. Let us take care and not allow them to mislead us."

Karua further took a swipe at Deputy president William Ruto for not cooperating in running the government with President Uhuru Kenyatta.

He termed him as irresponsible, selfish and disrespectful leader who is always complaining and maligning the President's reputation.

Kibiru thanked the Azimio coalition for the endorsement.

"We will pursue all those who have embezzled government funds. I pledge to run a citizen centric administration that will put your needs ahead of everything else."

Kagai, who was missing in action, was represented by his running mate Ndegwa Njiru who said they had since accepted the fate and pledged their full support for  Kibiru-Ndambiri candidacy.

Njiru said they will shelve their ambition and give a stab into the governorship at a future election.

Kirinyaga Central MP Munene Wambugu during a final campaign rally on Saturday. The rally was attended by Azimio coalition presidential running mate Martha Karua and a host of other Jubilee and Narc-Kenya candidates.
Image: WANGECHI WANG'ONDU

He described Karua as a freedom fighter who will fight for the country.
News
1 month ago