The two met by chance after many years when the President visited Kirinyaga last week. The President inspected the vast project in the company of local leaders with journalists in tow. Kamau was not left behind much as his walking speed was slow.

“The President and his entourage were walking on the sloppy path and as such, I was not able to catch up with the team. I was the last person and hoped to speed up and catch up with them when they stopped at some point, but, unfortunately, I saw the Presidential Escort cars taking to his direction to pick him.”

“Instead of proceeding, I made a round turn and began going back. It was at that point that the President’s motorcade passed by and as soon as I turned my head, I heard someone call me ‘Mzee Kamau'. Ooh, it was the most unexpected person, President Uhuru Kenyatta calling me while in the co-driver's seat in his official car,” an elated Kamau said.

The veteran journalist said the President caught him by surprise when he recognised him even after so many years.

“As much as he was surrounded by hawk-eyed security officers, he told me to draw closer and greet him, and then we began chatting in the glare of thousands of locals who had turned up to acknowledge his presence. It was such an honour.

“I gave him my phone contacts after he requested me to, and assured me that he would invite me so that we could catch up in the near future". 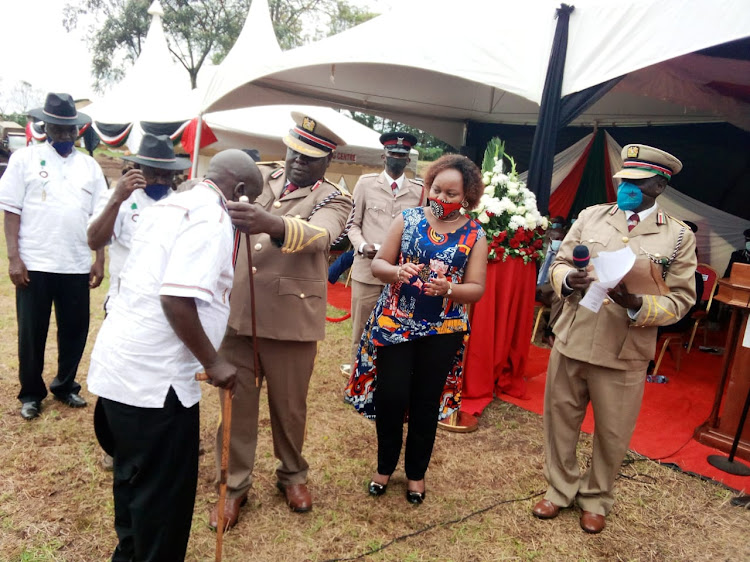 Beside the three to five-minute cheerful conversation with the head of state, the celebrated journalist also got his moment of honour after he rode in the President’s motorcade.

The journalist, who has over 35 years of experience, narrates that his friendship with the President dates back in the 90s when Kenyatta was the chair for the Kenya Tourism Board. He says he covered his events and continued even as Kenyatta graduated into politics.

Kamau says he looks forward to the President’s invitation as the two have a lot to catch up on.

The journalist was in last year’s Mashujaa celebrations recognized by the state as a hero for his fight for multiparty democracy and freedom of speech during Kenya’s second liberation.

Arrested in the same day of 1987 alongside notable figures such as ODM Party leader Raila Odinga, Wanyiri Kihoro, Wahome Mutahi, Njuguna Mutahi , Okong’o Oyugi among others , Kamau and his co-accused  would be detained without trial and tortured in the notorious Nyayo chambers .

The seasoned journalist appreciated President Kenyatta’s government for recognizing his contribution  towards widening democratic space in the country .

The hero also urges the state to hasten the process of publishing his name  in the  Kenya Gazette  as well as  awarding him with a certificate and Head of State Commendation medal he is yet to get.

“I hope the President will look into my  issue as I’m the only Kirinyaga county survivor of the Nyayo detainees era. The cause for which we fought for was worthwhile and it gladdens my heart that we are all enjoying the fruits of our struggle.”