Commissioning of Lamu and Kisumu Port have continued to be postponed despite the facilities being ready to handle cargo.

•Ethiopia, a major partner in the Lapsset project has options of Djibouti and Eritrea ports where there already exists a good road and rail network.

•Tanzania on the other hand continues to push for increased trade through the central corridor, while it eyes regional markets of Uganda and Rwanda through its Lake Victoria ports of Mwanza, Musoma and Bukoba. 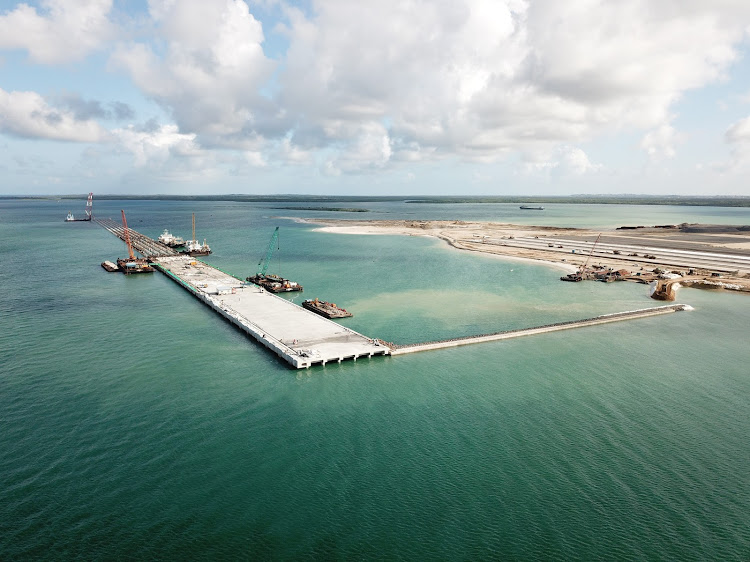 An aerial view of the ongoing construction of Lamu Port/Courtesy

This is evidenced by the delays in the commissioning of Kisumu and Lamu Ports, which have been postponed more than twice since last year, despite sections of government agencies indicating readiness for their operationalization.

CS says the remaining two per cent will be completed in two weeks.
News
2 years ago

While construction of the first three berths at Lamu commenced in 2012, after commissioning of the Sh2.5 trillion Lamu Port-Southern Sudan-Ethiopia Transport Corridor (Lapsset) project by former President Mwai Kibaki, the project's construction continues to drag.

Ethiopia, a major partner in the Lapsset project is however not very keen with Lamu as it has options of Djibouti and Eritrea ports, where there already exists a good road and rail network.

According to the shippers council, the end of political and economic wars between Ethiopia and Eritrea following the July 2018 peace has created a conducive environment for trade.

South Sudan has also been adamant in development of the project.

“Let’s not count on these countries. If today South Sudan and Sudan go back to the old days and allow passage of goods through Port Sudan, it will impact Lamu Port. Ethiopia the same with Eritrea and Djibouti,” Shippers Council of East Africa (SCEA) chief executive Gilbert Langat told the Star.

Tanzania on the other hand continues to push for increased trade through the central corridor, while it eyes regional markets of Uganda and Rwanda through its Lake Victoria ports of Mwanza, Musoma and Bukoba.

This has seen the much anticipated launch of Kisumu Port delayed as regional governments fail to agree on a common launch plan for the Kenyan facility.

According to transport experts, Tanzania is said to be playing protectionism for its Lake facilities.

“Tanzania is focused on ensuring it captures a sizable transit market through its Lake facilities ” a Tanzanian official who spoke on anonymity told the Star.

Commissioning of Lamu had been set for November 8, last year but was later postponed, making it the third time the launch is being differed.

Kisumu Port on the other hand was to be launched late last year, which was later pushed to January this year this year, an event that is yet to take place to date despite the facility being used to export oil to Uganda.

The first consignment of 22 wagons loaded with 894,000 litres of diesel was shipped last December.

22 wagons loaded with 894,000 litres of diesel sailed off from the Kisumu Port on December 21.
Business
2 years ago

Naivasha Inland Container Depot on the other hand is yet to get the required equipment and linkages.

President Uhuru Kenyatta commissioned the Sh6.9 billion Naivasha Dry Port on December 17 last year but the depot is yet to commence operations, due to lack of a linkage Meter Gauge Railway to the Suswa SGR station.

“There is need for a good road network and availability of storage space,” Langat told the Star.

On Lamu, transporters are hoping the government will ensure security of trucks, cargo and drivers.

“Currently there is imporoved security because the contructors are on site, we hope the same is maintained even after the road and port are complete,”

The first three berths are being developed by China Communication Construction Company for Sh71.2 billion, where the first berth was announced complete on August 6 last year.

Lapsset Development Authority has confirmed the remaining two berths are at an advanced stage with actual completion of the project at 76 per cent.

This is however against a planned progress cumulative of 81.58 per cent.

The delays facing the project saw state officials meet in Mombasa in January this year, where the three governments renewed their commitment to Lapsset corridor.

Kenya’s Transport Cabinet Secretary James Macharia, Ethiopian Ambassador to Kenya Meles Alam and South Sudan’s Undersecretary in the Ministry of Transport Captain David Martin signed an MoU to signify the three states’ commitment in supporting the revitalization of the project.

The Lapsset project launched on March 2, 2012, has been facing challenges that include financing and lack of good political goodwill
Business
2 years ago

Lapsset authority has confirmed operationalization process for the port has begun with making it compliant with International Ship and Port Facility Security Code (ISPS Code) and Marpol regulation, the main international convention aimed at the prevention of pollution from ships caused by operational or accidental causes.

“Continuous coordination with shipping lines is being done to coincide with commissioning,” Lapsset secretariat told the Star.

Shippers are pushing to have Lamu as a transshipment hub. Transshipment is the shipment of goods or containers to an intermediate destination, then to another destination.

“Our proposal is we look at Lamu in-terms of minerals, petroleum export and transshipment cargo. We also need to create an industrial zone with proximity to the port,” Langat said.

Currently, Kenya transships through the Port of Salalah, the largest port in Oman.