• “I think they feel supported by their team-mates, which is very important to them,” said Southgate.

• England players were booed as they took the knee before kick-off at the Puskas Arena and were pelted with objects during the second half, when a flare was also thrown on the pitch. 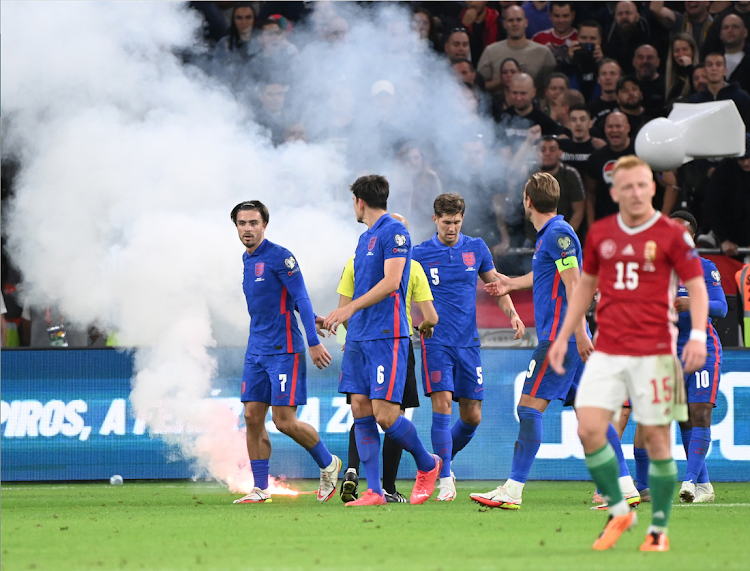 Gareth Southgate says his England team have to “keep fighting that battle” against racism after players were abused during the 4-0 win in Hungary.

Manager Southgate praised his players for their “incredibly mature” response.

“I think they feel supported by their teammates, which is very important to them,” said Southgate before Sunday’s World Cup qualifier against Andorra.

“I think their teammates recognise how challenging it must be for our black players and how disappointing it is in the modern world that we continue to have to answer these questions because of the incidents that happen.”

England players were booed as they took the knee before kick-off at the Puskas Arena and were pelted with objects during the second half, when a flare was also thrown on the pitch.

Southgate added: “We can only keep taking the stance that we have done and hope that we continue to send the right messages, not only to people in football but across society, and that everybody keeps progressing.

“We know it’s going to take time and we know that feels very slow for everybody, but we have to keep fighting that battle.”

Borussia Dortmund midfielder Bellingham, 18, tweeted after the game to say racism will be “part of the game and always will be until proper punishments are put in place by those with the power”.

Speaking on Saturday, defender Conor Coady said the hostility the team had faced had not affected morale in the camp.

“We’ll carry on doing what we’re doing, carry on trying to take a stance, and in terms of not just in football but in society we want to try to help, and help change.

“I think it’s important we all stick together, which is something we’ll always do.”

Despite Uefa ordering Hungary to play three home games behind closed doors after their supporters’ discriminatory behaviour, fans were allowed in on Thursday as the game came under Fifa’s jurisdiction.

The Uefa ban relates to racism and other discriminatory conduct which took place during Euro 2020.