NO PAIN, NO GAIN

•Alfonce Kigen, who finished second in the men's marathon, was relieved to compete in his first race this year 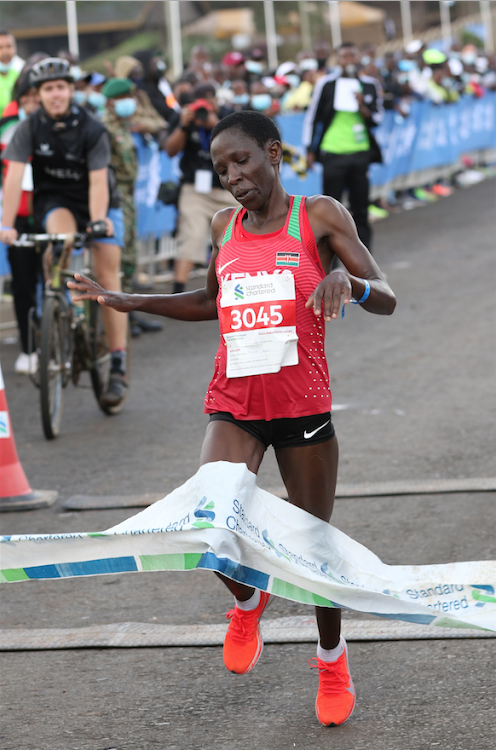 After clinching second at Sunday's Stanchart Marathon, Naomi Maiyo admits she needs to up her training to cope with the demands of a full marathon.

The 2019 Taipei City Marathon champion said she needs to change her training venues to ensure she can take her marathon career to the next level.

"The course here was very tough because it was either hilly or slippery and so I had to adapt myself to it to win. Going back to my training, I need to start running in hilly places so I can make it comfortably through such difficult courses," Maiyo said.

Her performance was a huge upgrade and perfect comeback from the disappointment of being disqualified from June's Eldoret City Marathon.

It came approximately two months after a disappointing 18th place finish at the Xiamen Marathon in Tuscany, Italy in April.

"I am very happy to have finished second today considering this was my first time competing in the 42km race in this competition. Compared to Italy, I would say this course is much better and the weather was also perfect although Tuscany was a fast course," Maiyo, who clocked 2:30:09 in Tuscany, said.

Elsewhere, Alfonce Kigen, who finished second in the men's marathon, was relieved to finally race before the end of the year having spent the majority of it out of action.

"It has been a tough year for many of the athletes, including me who was competing in my first race for the year. That is why I am really happy to have finished second considering the course was also quite hilly," Kigen said.

The road runner with a personal best of 2:10:24, which he clocked in Wien, Austria in 2017, hopes 2022 will be a lot kinder to him especially in light of the improving situation of the coronavirus pandemic.

"I will now sit down with my management to see what races are on offer and hopefully next year will be more active than this one," he said.