Use science and zero in on development of backward areas and you'll see miracles.

• Bad leadership and war lordship stand promore cattle rustling and banditry.They treat people as votes and give them give them guns.

• Lack of contact and trust has led to people relying on warlords caring nothing about their welfare. 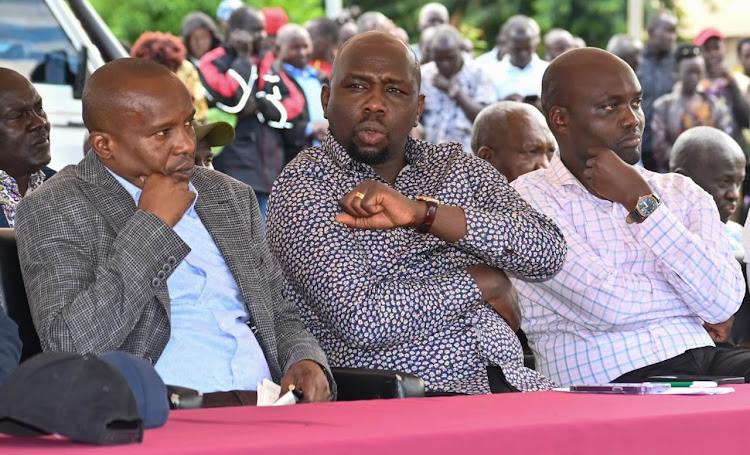 Cattle rustling and drought have been a paradox in the Northern part of Kenya and the North Rift for the longest time now. The Interior CS, Kithure Kindiki has taken to reminding us that he will crush banditry every time a new case is reported.

Verbal solutions are good on paper and for campaign trails. Implementation is what would set this government apart from their predecessors.

Poor leadership has been one of the weakest links in solving this crisis once and for all. The North Rift and Northern Kenya leaders have time and again used the citizens in those parts as nothing more than votes. Once elected, they go back to the more developed parts of the country and leave the citizens to their own devices.

Lack of direct contact and service with their leaders has led to a lack of trust in the local and national governments. This creates a huge gap that is easily filled by warlords. These war peddlers create their own ecosystem that leads to the citizens relying on their existence.

They give banditry jobs to the youth and men in the these communities. This is what feeds the families as there are no legal jobs due to lack of education in the areas. The community does not only rely on the banditry to survive but also protect the warlords as they are their hope in the drought and famine stricken areas.

Geographical isolation has let the local government get away with lack of development in these areas. Poor or lack of infrastructure like roads cuts off those areas from everything that can lead to a dignified life.

As there is limited or no education, there are no professionals in the areas. They rely on imported services from other counties.

Doctors, nurses, teachers and all needed professionals have to come from other parts of the country. Successful recruitment and deployment is done by the national government and relevant authorities but sabotaged by banditry and lack of infrastructure. Professionals sent to those areas always ask for transfers due to attacks and horrible work environments. There is nothing to support any positive move towards development.

Not all professionals are lucky to survive the attacks. There have been reports of murdered professionals over the years. The police are not exempted from these deaths. The bandits indiscriminately kill the people sent to help, which leads to other professionals refusing to be deployed there.

The lack of proper foundations for development should worry every Kenyan as it is a set up for the banditry to come down to the other parts of the country. As the North Kenya leaders declare helplessness and empower warlords, the national government should take steps that include fully developing those areas.

This will stop any migration and need of imported services from and to the areas. North Kenya has the potential to thrive through trade, large scale agriculture, mining and tourism. All the above should be diligently explored and used to feed, educate and empower the citizens.

The system appears to be rigged to fail the citizens in all ways including starving out their generations. The national government is the only saving grace for these communities. With the unlimited access and power it enjoys, it can end the degrading life being lived by the citizens.

Rome was not built in a day. Educating the people to the point of self reliance would take some time. Development can be in stages. Necessary deployment of security forces can ensure the improvement of working conditions for the imported services. Presence of strong security will allow for trade that would provide forms of sustenance to the people. Slow and steady growth is achievable.

CS Kithure should go a step further to name and shame the political leaders rumoured to fund banditry. He should throw the book at them and make them an example of what should happen with what is essentially funding terrorist attacks. This would go a long way to liberate the citizens from the warlords and build confidence in the government's ability to actualise plans.

President William Ruto, in his wisdom, has spoken about accountability in his government. This is a great chance to showcase that his are not just empty words. This would be an unquestionable legacy if it was to be accomplished in his first term as president. He could go a step further though.

With his seeming resolution to include everyone and everywhere in his government agenda. President Ruto could consider leveling the development state across the country.

The regions that look like they are much ahead in infrastructure, education, health and other development yardsticks could be given a little less attention than those that have been historically disadvantaged receive more attention and resources.

You are more unlikely to see university graduates invading, stealing cows and killing people than those without basic education. Areas with developed infrastructure — roads, railways and electricity — experience less crime than the inaccessible North Rift and North Eastern. A healthy, well fed population is less likely to be tempted by stealing cows than that with hunger and disease.

It will not be in a day, but deliberate, steady and regular steps in development will make the country safe and secure.

I'm President, I can't 'storm' any part of Kenya – Ruto

Says his tour of Nyanza should not be interpreted as invasion of someone's territory.
News
3 weeks ago

The report analysed data from 15 low and middle-income countries including Kenya.
News
3 weeks ago
Post a comment
WATCH: The latest videos from the Star
by MICHAEL MUGWANG'A
Siasa
22 January 2023 - 18:35
Read The E-Paper