• Uasin Gishu County Director of Education Gitonga Mbaka is a man who shies away from publicity.

• He rarely comments on many issues whenever approached by the media. 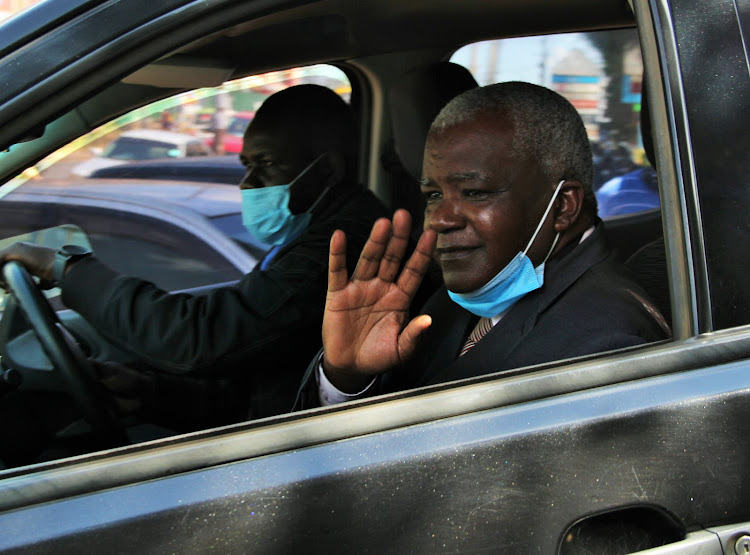 INSULTED: Uasin GIshu education officer Gitonga Mbaka leaving the EACC offices in Eldoret on November 18 after recording a statement about the incident in which Education CS George Magoha insulted him.
Image: MATHEWS NDANYI

Mbaka was marking time to retirement, perhaps to slow down and have a deserved rest. Or maybe, like many retirees, get into farming.

But an incident in which Magoha called him an idiot has thrust him into the limelight.

The Public Service Commission acted swiftly. It purported to strip Magoha of his human resource function.

Magoha scoffed at PSC. He said President Uhuru Kenyatta, the appointive authority, had the final say on the matter.

The professor doubled down on the matter, declaring during an event in Machakos a few days later that he will not apologise.

He said incompetent staffers should not be surprised at his management decisions.

The Ethics and Anti-corruption Commission has also swung in. It is investigating the matter and wants to sanction Magoha.

All these because of that ugly encounter between the CS and Mbaka.

Gitonga Mbaka, who has been the Uasin Gishu county director of education is a reserved man.

He shies away from publicity and is often without comment whenever approached by the media.

Even at his office in Eldoret, colleagues say Gitonga keeps away from controversy and is never one to quarrel.

But since the incident at Langas Primary School in Eldoret, he has been squirming at the coverage in the media and spiralling of the matter.

Magoha was visiting the school to assess compliance with Covid-19 measures and also inspect the delivery of desks.

He was upset by the state of hygiene at the school, leading to the public spat with the education officer.

The CS accused Mbaka of sleeping on his job. Mbaka tried in vain to explain the measures he had taken including writing a report on the situation at the school.

Mbaka boasts 35 years of service in the education sector.

With fewer than five months to his retirement, does not want to discuss the incident with the CS who is his boss.

“I have nothing to say about what happened,” he told the Star.

Close colleagues, however, told the Star that the incident has left him disturbed.

“Mbaka insists it was a very unfortunate and bad incident which he wishes never happened especially at the time he is heading for his retirement,” a colleague said.

The Uasin Gishu education head has said he has forgiven the CS and would not engage in any exchanges with his boss.

“I have forgiven the CS and I am focused on serving the country as I prepare for my retirement in March 2021 after over 35 years of service in the education sector,” he was quoted saying after the incident.

For now, he discharges his duties quietly. That's all he has ever done.