Amazon said it has a system "that recognises great performance". 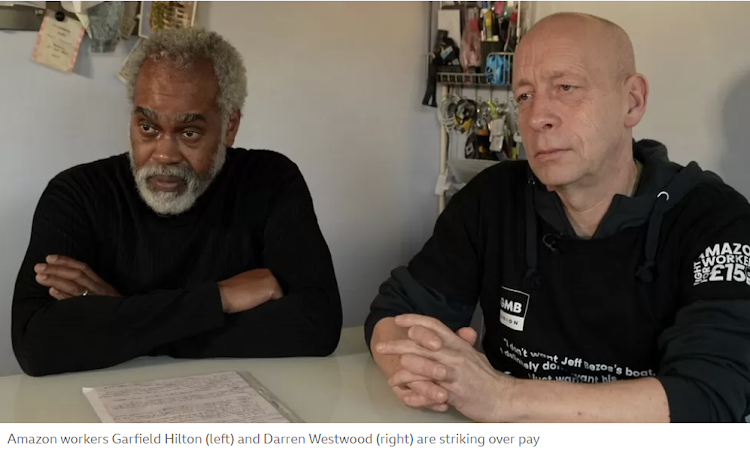 Amazon workers are staging the first ever UK strike on Wednesday against the online giant in a protest over pay.

Around 300 staff walked out at Amazon's Coventry warehouse, the GMB union said, over what they called a "derisory" 5% pay rise to £10.50 an hour.

Workers told the BBC about "severe" conditions, claiming they are constantly monitored and upbraided for "idle time" lasting just a few minutes.

Amazon said it has a system "that recognises great performance".

A spokesman said it "also encourages coaching to help employees improve if they are not meeting their performance goals".

Two Amazon workers, who are members of the GMB, said the robots in the warehouse "are treated better than us".

Darren Westwood and Garfield Hilton described to the BBC how even a trip to the toilet can lead to questions by managers.

"The thing with stopping work is that they want to know why," said Mr Hilton. "So if the time is beyond a couple of minutes they can see it on the system."

'They will question you'

Mr Hilton, who has diabetes, said it is not always possible to find toilets close by in the building and the process of locating one and returning can sometimes take upwards of 15 minutes.

"They will then question you, 'what were you doing?'"

The men said that managers track staff performance, and time that is not spent scanning items is accrued.

Workers at the Coventry warehouse scan stock which is sent out to Amazon fulfilment centres, to be shipped to consumers.

Instead of scanning, workers might be asked to handle pallets. "So when there's problems with a pallet or a box, that time will accrue," said Mr Westwood.

"Technically it could add up to 30 minutes. [The managers] will come down and say, 'during today, you've had 34 minutes of idle time. What were you doing?"

A spokesman for Amazon said: "Performance is only measured when an employee is at their station and logged in to do their job.

"If an employee logs out, which they can do at any time, the performance management tool is paused."

But Mr Westwood and Mr Hilton said some colleagues were working 60-hour weeks to keep up with the cost of living.

Mr Hilton said that he has seen workers falling asleep on the short bus ride to Amazon's warehouse. "There's a huge amount of them in the building virtually in ghost mode."

He said Amazon wants "every minute in that building to be maximised".

"You have to look at it this way, if the box with the product is not moving, you're not making money. This is Amazon. If there's a problem with a box, it's a loss-maker. If the box leaves a building it is making money."

In August, Amazon offered UK workers a 5% payrise, which was worth 50p outside London and the South East.

Inflation, the rate at which prices rise, is at a 40-year high, putting pressure on household budgets.

Bogdan, who is 29, has worked for Amazon since 2015. He said after workers put their health at risk to work during the height of the pandemic, the pay offer "insulted" staff.

He said one reason for striking was the public needed to "understand what is going on" behind the scenes every time they make an order.

He claimed Amazon portrayed an image that "everything is fine", but he added: "It's actually not true."

An Amazon spokesman said it was "proud" of its "competitive" pay rates. He said the starting pay for workers was £11.45 an hour in London and the South East, and £10.50 an hour in the rest of the UK.

He said this marked a 29% increase in the minimum hourly wage paid to Amazon employees since 2018.

But union members want to be paid £15 an hour. Mr Westwood said the 50p offer was "a smack in the mouth".

"These people had worked two years through the pandemic, that had seen Amazon's shares go through the roof. They had seen the profits just become unimaginable," he said.

Amanda Gearing, a senior GMB union organiser, told the BBC's Today programme that Wednesday's strike action would have a "massive impact" on the Coventry warehouse.

"Coventry might be the start [of the strikes], but it won't be the finish," Ms Gearing said from the picket line. "We know there are workers in other centres that feel exactly the same."

She added: "People are having to choose between heating their homes and... eating really, so it's not good enough, not from someone like Amazon that's got billions and billions of pounds of profit during the pandemic."

Amazon's global sales and profits soared as Covid restrictions forced people to shop online. Between 2019 and 2020, profits nearly doubled to $21.3bn (£17.2bn) and rose again the following year to $33.3bn.

Growth has been uneven since economies have reopened and after taking on thousands of staff since 2019, Amazon is now laying off 18,000 workers worldwide.

Mr Westwood said "people might think we're being greedy" by asking for £15 an hour. But he pointed to Jeff Bezos, Amazon's founder, executive chairman and space adventurer, who has a $120bn fortune according to Forbes magazine.

But Mr Westwood said the numbers were "brilliant". Amazon does not recognise unions but, according to the GMB, there are members scattered throughout the UK in varying numbers.

Amazon has been battling against unionisation in the US.

More than half of the 8,000 workers at a warehouse on Staten Island, New York, voted to join the Amazon Labor Union which has now been officially certified. However, the company has vowed to appeal the certification.

Mr Westwood said there was a huge range of different nationalities who work at Coventry. "They don't understand this is the UK - we can organise a union, we can protest, we can withdraw our labour," he added.