Ruto: I'll decide whether to appear for presidential Debate

He said it was regrettable that his Kenya Kwanza side was getting 35 per cent on news coverage.

•Ruto said notwithstanding the direction the media has taken towards coverage, the debate was essential.

•His Presidential campaigns secretariat had earlier given the clearest indication that Ruto would skip. 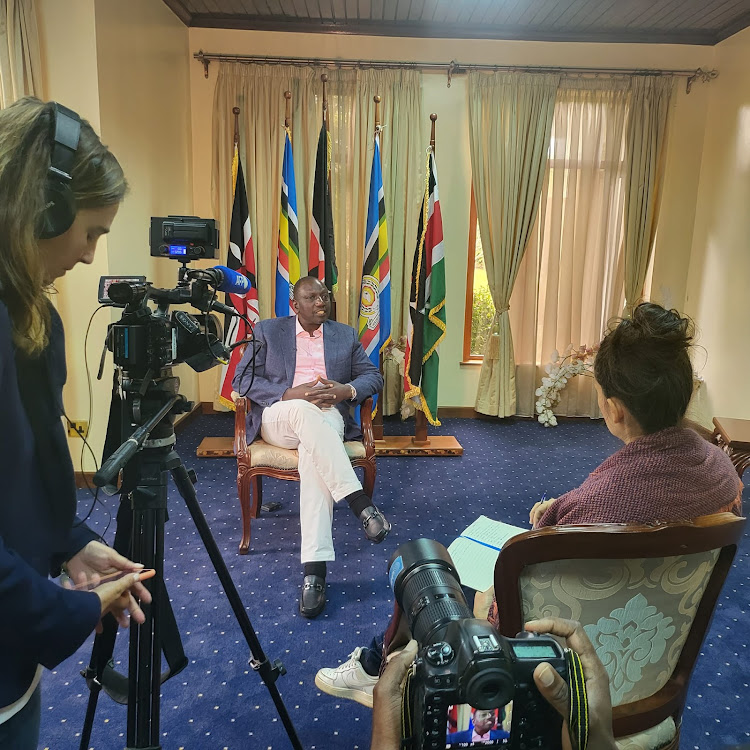 Deputy President Wlliam Ruto during an interview with one of the international media at his Karen residence on July 18.
Image: Courtsey

Deputy President William Ruto is considering participating in the presidential debate set for next week.

Ruto said notwithstanding the direction the media has taken towards coverage, the debate was essential as it provides a good platform for Kenyans to better understand the candidates in the race and their plans.

“In the next few days, we are going to decide on how to participate in that debate and hopefully to attend even with the prevailing media situation in the country,” he said.

Ruto spoke during an interview with a vernacular radio station-Muoroto FM-on Thursday at his Karen residence.

Lamenting alleged biasn=, the DP said it was regrettable that his Kenya Kwanza side was getting a paltry 35 per cent on news coverage as compared to his Azimio la Umoja’s Raila Odinga.

He said while there was no problem with media houses aligning themselves to particular sides; it would only have been wise if they also accord his side a fair coverage.

(“I have asked my brothers in the media, what is difficult in being fair to all sides...this is our country and if the media says they are free, fair and independent, what is making you be unfair to our side?)

Media houses, he said, had democratic rights to lean towards particular factions but implored them to grant him and also his team equal coverage.

On Friday, Kenya Kwanza presidential campaign secretariat refused to comment if the candidates (Ruto and his running mate Rigathi Gachagua) will feature in the debates.

The presidential debate is scheduled for July 26 while that of the running mates has been set for July 19.

“Whether or not the candidate (Ruto) and the running mate will appear is a matter that firmly rests with them...My team and I made ourselves clear through a statement some time back based on the current media environment,” said Hussein Mohamed, the Head of communications in Ruto’s Presidential campaigns.

Post a comment
WATCH: The latest videos from the Star
by FELIX KIPKEMOI Political Reporter
News
18 July 2022 - 22:06
Read The E-Paper