Kibicho said the government will not relent in dealing firmly with the perpetrators.

•Kibicho said the relevant state authorities have since summoned the alleged lawbreakers.

•Kibicho further put the governor in the spotlight for allegedly leading night meetings whose purpose is to insult and incite residents against other local leaders. 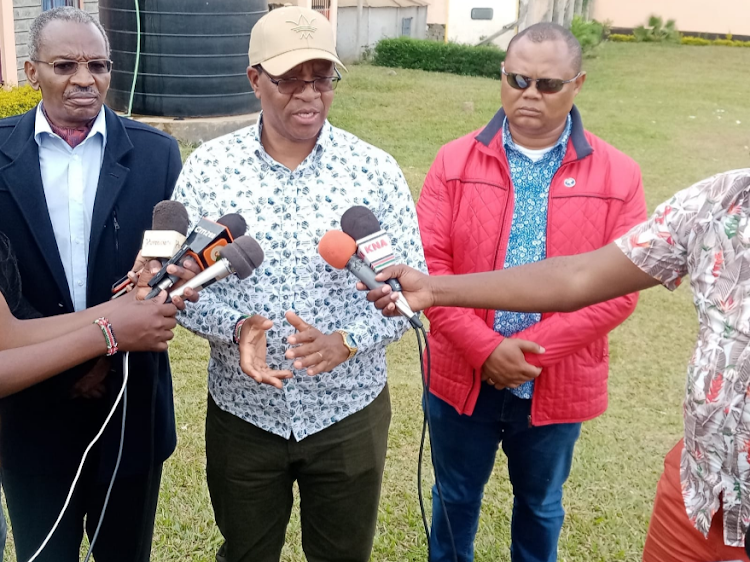 Speaking on Friday, Kibicho says his ministry has since received an intelligence report from local administrators of how the governor is carrying her goons to her campaign meetings and using them to unleash chaos on her anti-supporters.

He however maintained that the government will not relent in dealing firmly with the perpetrators.

In addition, he said the relevant state authorities have since summoned the alleged lawbreakers.

Kibicho also put the governor in the spotlight for allegedly leading night meetings whose purpose is to insult and incite residents against other local leaders.

"We are aware of the night meetings she has been hosting and how she is manipulating the youths who in turn are escorting her to political meetings while armed with batons. The batons are not meant to shepherd goats and sheep, they are for a nasty mission!" he added.

Waiguru has however dismissed Kibicho's claims and told him to prepare to go home.

"Go tell Kibicho that the writing is on the wall. He has only a few days in office. I have heard him talk about goons. He should continue campaigning for Azimio," Waiguru said.

The PS said they will embark on a mission to disarm the baton-wielding youths who have since been armed with weapons during such a sensitive campaign season.

The PS says Waiguru is calculative and that her motive is to get arrested for incitement charges so that she can seek political sympathy in order to get re-elected.

"We are not participating in her planned theatrics. Let her know that it is too late to seek political relevance through such means. Kirinyaga residents are not fools as they well understand her intention".

His sentiments come as Waiguru has been leading the county UDA party battalion in attacking PS Kibicho for allegedly frustrating their bid.

They claim that the PS has been orchestrating their downfall through the use of state operatives to arrest them for trumped-up charges.

The PS spoke after holding a meeting with top county security officers and all county local administrators in Kerugoya to assess the state of security of the county in the run-up to the August 9, polls.

He said the government will continue working hand in hand with all the local administrators in a bid to ensure that the upcoming polls are conducted in a peaceful manner.

In addition, he noted that the initiative will be spread throughout the country as the local administrators are the government's representative in the smallest units of the country and are equally instrumental in ensuring that security prevails.

At the same time, Kibicho noted that his ministry would continue engaging and supporting the IEBC in the provision of security.