• The revelations underscore the Jubilee administration’s appetite for debt and could once again put the spotlight on the government that has been under intense criticism over the growing public debt. 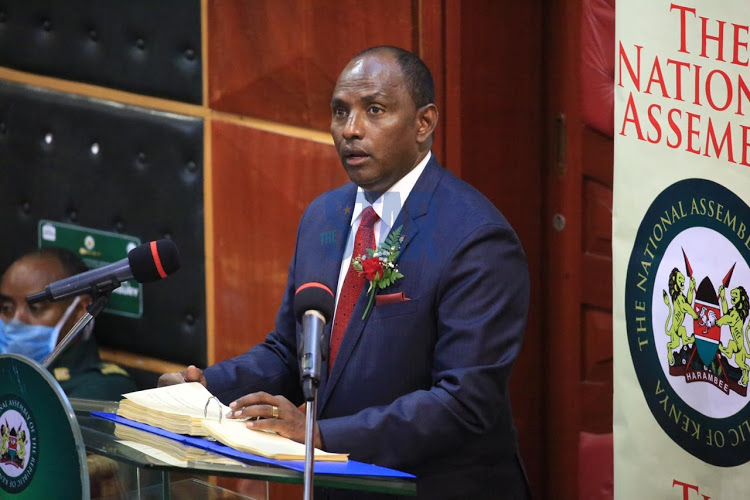 The government has borrowed Sh1.06 trillion during the coronavirus pandemic period to push the country's public debt to Sh7.34 trillion.

The latest budget implementation review report by Controller of Budget Margaret Nyakang'o also shows the government borrowed an average of Sh2.89 billion every day or Sh88.33 billion per month in the past 12 months.

“Increased public borrowing may result in undesirable fiscal consequences such as high-interest rates, inflation and overburdening of future generations,” she said.

The debt stock comprises 51.4 per cent external and 48.6 per cent domestic borrowing. The total debt represents about 66 per cent of the country’s Gross Domestic Product.

This even as the report which captures the national government’s expenditures in the first nine months of 2020-21 shows that the government is spending nearly two-thirds of its loan repayment budget to pay interests.

The revelations underscore the Jubilee administration’s appetite for debt and could once again put the spotlight on the government that has been under intense criticism over the growing public debt.

In the 2020-21 budget, the National Treasury allocated Sh958.40 billion or about 89.3 per cent of all revenues collected by the Kenya Revenue Authority to service loans.

“The revised allocation towards servicing of public debt in the 2020-21 amounted to Sh958.40 billion, representing 89.3 per cent of the CFS (Consolidated Fund Services) revised budgetary allocation, an increase compared to Sh696.55 billion allocated in the 2019-20,” Nyakang'o's report says.

During the period under review, the government spent Sh614.69 billion, leaving a balance of Sh343.71 to be cleared in the last three months of the financial year.

“This is attributed to growth in the principal amount paid over the period for both domestic and external and growth in interest paid on domestic debt respectively,” the report says.

Of the Sh614.69 billion spent on repayment of debts, Sh366.29 billion or about 60 per cent payment goes towards payment of interests. Only Sh248.40 billion went towards servicing the principal loan.

This is compared to Sh334.55 billion which was spent on development activities during the period under review.

“Funding of the development budget was targeted to be through donor funding from development partners and by the government at Sh295.15 billion and Sh401.42 billion respectively,” the report says.

This explains the extent to which the debt is taking a heavy toll on the government, with most projects, including the president’s Big 4 Agenda and the 47 county governments suffering budget shortages.

“While borrowing, the government should ensure that its financing needs and payment obligations are at the lowest market cost and with prudent risks,” Nyakang'o recommended.

Nyakang'o's report on the status of the exchequer was released two weeks ago.

She said the Treasury was yet to release Sh153.38 billion to the national government ministries, departments and agencies for development with only days left to the end of the fiscal year.

This was an equivalent of 35.34 per cent of the total development vote for the MDAs.

It was at Sh7.3 trillion last December and is expected to hit Sh7.6 trillion by the end of this year, an equivalent of 72 per cent of GDP.

Last month, Central Bank Governor Patrick Njoroge announced the country was expecting more than Sh200 billion from international lenders by the end of June as part of budgetary support in light of the Covid-19 pandemic.

The loans would be advanced by the World Bank, International Monetary Fund and the African Development Bank.

The World Bank is expected to release Sh81 billion as part of a third Development Policy Operation programme to cushion the local economy from the vagaries of Covid-19.

In 2019, the World Bank disbursed  $750 million (Sh76 billion) as Kenya re-engaged the multi-lateral lender for direct support for the first time in years.

Last month, the government received Sh106 billion from the global lender to support its budget and cushion the economy from the impacts of Covid-19.

In a report to Parliament by Treasury CS Ukur Yatani on all new loans contracted by the government in the last six months, Kenya borrowed Sh132.37 billion from international lenders to implement various Big Four agenda infrastructure projects.

“The total value of the 10 new loans signed is equivalent to Sh132. 37 billion. One of the loans has been disbursed by the time of submitting this report,” Yatani said.

The loans, according to the report, will be used to implement road and water projects in various parts of the country, especially in Nairobi and Kisumu cities.

The first loan facility amounted to Sh6.46 billion or about $59 million to establish the rapid bus transit lane 5 in Nairobi.

"The purpose of the loan is to finance the implementation of the project whose objective is to provide economically feasible BRT; secure citizen’s mobility, accessibility and safety and reduce environmental effects caused by traffic congestion,” the report says.

The interest rate of the loan will be 0.1 per cent per annum on disbursed loan amount.

The second loan with the bank of Sh10.95 billion was also signed with the proceeds expected to facilitate the establishment of Nairobi ITS and junctions improvement project.

The project’s objective is to provide the structural improvement and expansion of Intelligent Traffic System, enhance urban mobility and safety in Nairobi and reduce social cost caused by traffic congestion.