Yatani: We must adapt to the new reality

Treasury CS says he has a plan to revive Kenya's battered economy in 2021.

•  CS says his sound plans for increasing government revenue, rationalising spending and staying away from lenders flopped when the pandemic hit. 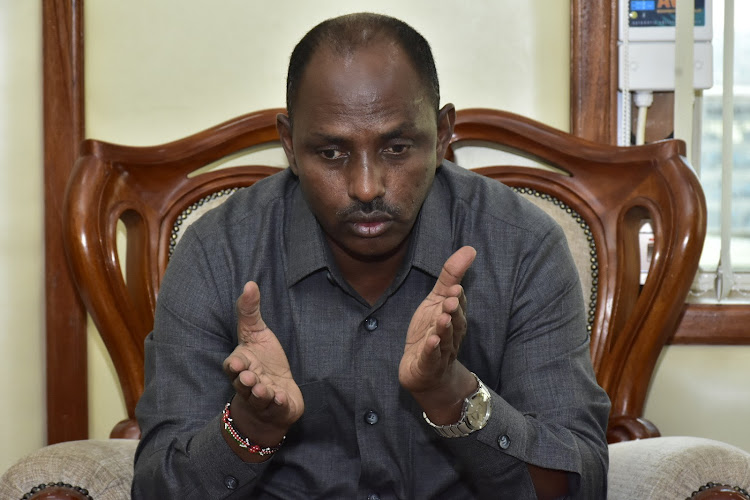 The National Treasury has assured Kenyans of a better tomorrow as most are heading to the festivities with empty pockets and prospects of a tough 2021.

Covid-19 has driven the economy to its knees and the end of the pandemic is uncertain.

But Cabinet Secretary Ukur Yatani said despite the tough times, the government is committed to cushioning Kenyans from painful effects of the pandemic while continuing to roll out projects.

In an exclusive interview with the Star, Yatani assured Kenyans the government will borrow less, increase the economic stimulus package and execute mega projects under public-private partnerships.

Speaking at the Treasury building on Tuesday, the Finance chief said the nation should not despair as the pandemic has hit not only Kenya but also grounded the global economy.

The CS citizens "must adapt to reality by remaining productive and aspiring to do better.

“We are calling on our people to make the best out of the circumstances, by working hard on their farms and wherever they are,” Yatani said.

In attempting to send a message of hope, the CS encouraged Kenyans to appreciate there are always good and tough times – seasons of plenty and dry ones.

“We must remain hopeful and hardworking. We have no other country except Kenya," he said.

“Everyone is struggling. We must remain dignified and optimistic that these worst times will come and go and Kenya will remain,” he said.

He urged leaders to relay the right message of solidarity and hope to the Kenyan people.

There has been dismay that the government has ended the tax relief President Uhuru Kenyatta announced in April to cushion individuals and businesses from the effects of the pandemic.

The relief, which included a reduction in VAT, is ending while companies cannot reverse the pay cuts that most implemented to stay afloat.

The waivers caused a revenue shortfall of as much as Sh186.3 billion.

The economy is projected to grow at one per cent from the initial estimates of six per cent and debt is expected to amount to Sh8.4 trillion next year.

Health workers are on strike for allowances, millions have lost jobs and parents face pressure to pay school fees for four terms in one year.

Yatani said he was optimistic the measures taken by the government to cushion businesses and the vulnerable of the society would help.

He said the hope is that 2021 would see a reversal of job losses as the government rolls out credit guarantee schemes for SMEs.

“We have identified SMEs as a nucleus of growth and we expect they will transition us into an industrialised country,” the CS said.

Yatani said his strong plans for increasing government revenue, rationalising spending and staying away from lenders were hurt when the pandemic hit.

The CS said he is navigating a tricky situation, more so with the fall in export and import tax earnings, which are a major revenue stream.

The Treasury boss says he is faced with a dilemma of pursuing fiscal consolidation and addressing the challenges of Covid-19.

This, he said, is compounded by the fact that the virus has led to non-performance of businesses, causing jobs and revenue losses.

The situation is worsened by reduced fuel consumption as many people work from home, schools are closed and the tourism sector contracted by 83 per cent.

Yatani said though agriculture, mining and ICT sectors grew by some margin, the loss was huge and the economy shrank by 5.7 per cent.

“We also fear reducing expenditure since the economy cannot grow unless there is spending or investment,” the CS said.

In this regard, he said, the Treasury has had no option but to borrow since there was no way expenditure would be frozen.

The CS said fiscal consolidation was no longer a worry but the challenge is protecting people against hunger and health challenges, cushioning businesses and increasing cash flow.

Yatani sought to allay fears that the borrowings to mitigate Covid-19 effects would strain the country’s serious debt problem.

He said like every country, the government borrowed from the World Bank and International Monetary Fund, taking advantage of the rapid credit facility extended to member countries.

The CS said the Sh78 billion IMF loan for the Covid-19 fight does not attract any interest, has a three-year grace period and would be repaid in 10 years.

The World Bank’s loan of Sh100 billion will be repaid at 1.4 per cent interest, has a grace period of 10 years and repayment of 30 years.

“To a great extent, up to 90 per cent of the money was used for the right reason. Our situation would have been bad,” the CS said.

Yatani said the Treasury will not approve any commercial loans, which he called the cause of the worrying debt pile-up.

He asked Kenyans to appreciate that “every country borrows and most countries borrow beyond the value of their GDP.

“Borrowing is not bad; how you spend whatever you have borrowed is the challenge.”

The CS also sought to ally fears Kenya would default on its loans, citing a projected repayment plan for 10 years.

“We have never defaulted on payment. We are within the target. We budget for repayment every year and fulfil as required.

“Kenya has never defaulted since Independence and has never asked for debt forgiveness. But with the fall in exports, it is a tough time for u," Yatani said.

A large chunk of resources will be dedicated to debt repayment.

“We are highly sustainable but pressure from Covid-19 has put a strain on us. It is not that we are not able to pay but revenue is low. Since debt payment is the first charge on the Consolidated Fund, we remain with insufficient resources to settle all other obligations,” Yatani explained.

He said borrowing is now under control with the establishment of an autonomous Public Debt Management Office at Treasury.

“We are careful because if revenue is not growing and debt increases, we will have a problem. We get professional advice from the team so unless they concur, we cannot borrow,” Yatani said.

To beat the small window for borrowing, he said the government has strengthened the Public-Private Partnerships unit to facilitate investments.

In the system, local banks and firms would undertake projects and the public will pay for it – as for the Nairobi Expressway.

“If we were to borrow money for the expressway, it would have put a strain on us. We want to use PPPs to substitute for borrowing,” Yatani said.

The PPP unit is a directorate headed by director general Christopher Kirigua, a banker.

CS Yatani said that with gains in the manufacturing sector – citing local industries churning out PPE and masks – the country is headed for a better future.

The government intends to set aside Sh930 billion for post-Covid-19 economic recovery.