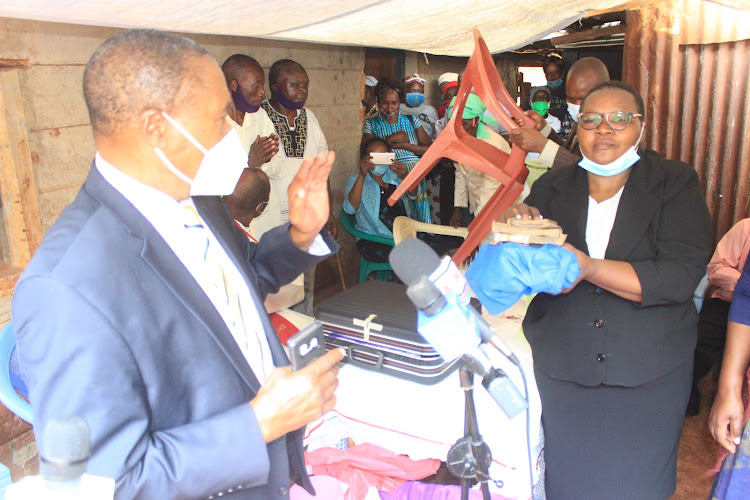 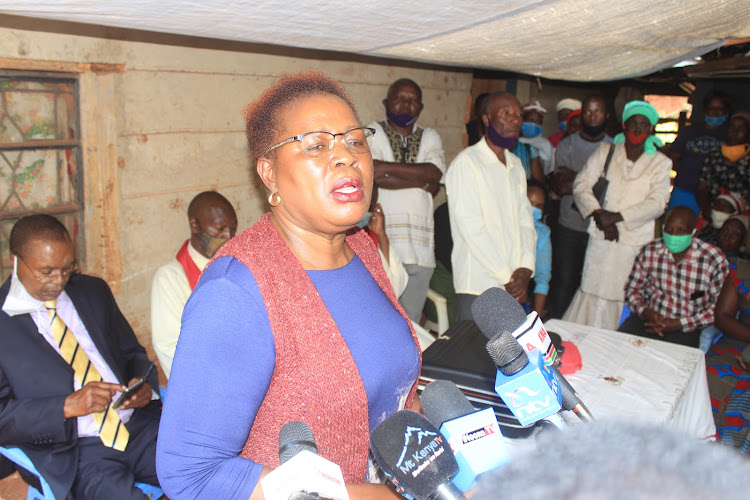 It was a pre-funeral photo op par excellence.

There was a bank of microphones, TV and still cameras and tape recorders at the shabby house in Nyakahuru village in Kangema, Murang'a, on Wednesday afternoon.

There were speeches and barbs as the rivalry between President Uhuru Kenyatta and Deputy President William Ruto played out through their allies.

Oh, we almost forgot. A family had just lost five members in a car crash on Sunday in Makueni county and politicians were rushing to condole. Naturally, the media had advance notice.

Kigano said the President had summoned him to State House in the morning and had committed to support the family's burial preparations.

But when Wahome and Ndindi arrived at the home, Kigano said the President didn't need help in financing the burial.

He said, however, no contributions would be rejected as the family needs as much help as possible.

Kigano admonished DP's supporters for visiting his constituency without informing him.  An all-important turf issue was raised.

In his speech, he asked leaders to shun politics, restrain themselves and confine their efforts to condoling with the family.

Kigano cited an incident in which Ndindi and a host of Kieleweke MPs led by Maina Kamanda clashed at Gitui Catholic church in Kiharu last year, resulting in Ndindi's arrest.

Ndindi said, however, that the deaths of the five famiy members touched him personally and he had come to represent the Deputy President and convey his personal condolences.

We also understand that this is not a place to play politics. We are hustlers and this is a hustler home that needs support.

"Such a thing has never been seen before in Murang'a. Such things do not have boundaries. Anyone can visit the family to support and comfort them," he said.

The Kiharu legislator praised the President and other leaders for their support.

Wahome said she had reached out to Muturi's staff and was informed he was in a meeting.

"But this is not a happy event. Nobody would want to be in such a situation. Any person coming with goodwill should be welcomed," she said.

"You cannot start giving restrictions to people who want to help. We also understand that this is not a place to play politics. We are hustlers and this is a hustler home that needs support," she said.

She had forwarded media reports to Ruto and he indicated he would support the family. He also asked to be informed if more help was needed for the burial that is yet to be scheduled.

Wahome said she believes in the freedom of expression enabled by democracy. "We thank the President for his support because we are all his people and we support him."

But as she spoke, Muturi stood and nudged her to conclude.

Wahome retorted that though Muturi is legally her senior, she is his political senior and requested more time.

She announced that MPs John Gakuya (Embakasi) and Rigathi Gachagua (Mathira) had contributed Sh25,000 each.

And what did the grieving family think of this performance?

They said 'thank you.'