IEBC has indicated its readiness to conduct poll should it get funds from Treasury.

• While Raila and his allies are pushing for the poll be held by June before the onset of the 2022 election politics, Ruto's men have vehemently opposed, with some recommending it be taken alongside the general poll in 2022.

• Push comes at a time the commission, which has only two commissioners and chairman Wafula Chebukati, is preparing for delimitation of electoral boundaries later this month 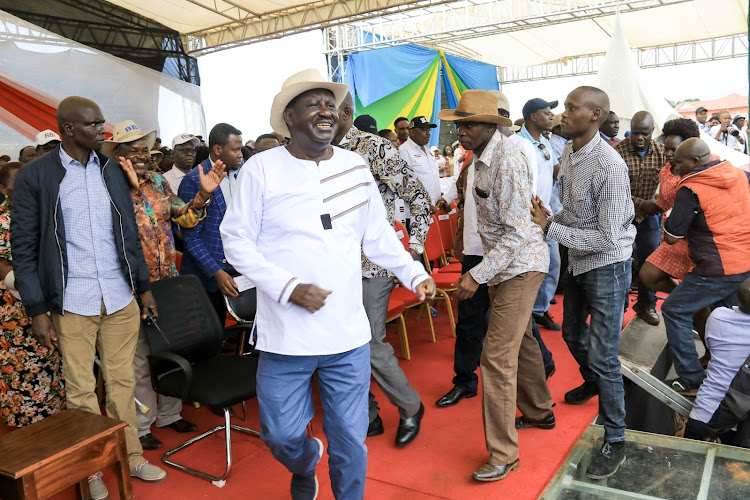 Even with the BBI task force months away from submitting their validated report, the political class is already divided on when the country should hold a referendum to effect the envisioned changes.

The debate, which is steadily gaining momentum, has seen charged political realignments with leaders coalescing around President Uhuru Kenyatta and ODM leader Raila Odinga and those supporting Deputy President William Ruto clashing on when the popular vote should be taken.

The Independent Electoral and Boundaries Commission has indicated its readiness to conduct the poll should it get funds from the Treasury.

The push comes at a time the commission, which has only two commissioners and chairman Wafula Chebukati, is preparing for delimitation of electoral boundaries later this month.

While Raila and his allies are pushing for the poll be held by June before the onset of the 2022 election politics, Ruto's men have vehemently opposed, with some recommending it be taken alongside the general poll in 2022.

The DP, particularly, has dismissed the referendum push as a waste of public money and accused the opposition of seeking to gauge their political strength at the expense of poor Kenyans.

The ODM leader has on several occasions said that the country will hold a referendum this year – soon after the ongoing validation of the BBI report is concluded.

This, he said, will resolve the myriads of problems, including bloodshed, that often mar the country every election cycle.

“This year is going to be a year of change in this country. We want to look at our governance structures and see what needs to be rectified,” Raila said last month.

In January, Senate Minority Leader James Orengo clashed with his Majority counterpart Kipchumba Murkomen over the appropriate date for the popular vote.

Orengo, a Raila confidant, said the referendum will take place in six months – June to avoid a clash with the 2022 election campaigns.

“For this to succeed, and knowing the election cycle is about to begin… as I have said before, if we must have a referendum, and my view is that we should, that should be conducted not later than June or July,” Orengo said.

But Murkomen dismissed Orengo’s timelines, saying it was practically impossible to hold a referendum in June because of the long process involved in such a vote.

According to the Elgeyo Marakwet senator who is close to the DP, should all factors remain constant including the availability of funds, the earliest the country can go to the polls in December.

“If you squeeze time and almost to a conveyor belt, it may be October, November or December. [But] if you ask me truthfully, there will be no referendum this year. I have heard some politicians saying this is the year of referendum forgetting that they said the same thing last year,” he said.

The initial report of the BBI task force headed by Garissa Senator Yusuf Haji proposes a raft of changes to the country’s governance structure. Key among them is the introduction of a Prime Minister with two deputies.

Creation of such a powerful office and tweaking of the Executive requires amending the supreme law through a popular initiative.

Article 255 of the Constitution stipulates procedures and timelines for conducting a referendum. First, the initiators of the proposed changes develop a Bill before collecting at least one million signatures of registered voters.

The Bill and the signatures are sent to the IEBC for verification. This takes a maximum of three months. Upon verification, the Bill is sent to all the 47 county assemblies for consideration within three months.

At least 24 assemblies are required to approve the Bill before it is forwarded to Parliament for approval. It is then taken to the President for assent.

While making his submissions to the BBI team late last month, Wiper leader Kalonzo Musyioka asked the task force to formulate the referendum question by June and the poll to be held in September this year.

“The BBI task force should propose a referendum question before the end of June 2020,” he said.

Job Ndege, a governance and leadership expert, opines that having a referendum this year is possible and that IEBC needs to empty its hands off the delimitation exercise and concentrate on delivering the plebiscite.

He notes the boundaries review can wait to wonder why the polls agency is in a hurry to run the delimitation process whose timelines have not been exhausted.

“The only big thing is that there is no budget for it but I suspect that some of the foreign governments could actually fund the process through a grant."

City lawyer Steve Ogola concurs but rules out chances of having the referendum by June as pushed by a section of the political class.

“It is possible but not by June, maybe towards the end of the year. It also depends if it proposes significant changes that reorganise the government fundamentally then we will need a referendum. So far there is nothing that requires a referendum,” Ogola said.

But governors are ready to engage other groups on a common push for a referendum.
Counties
2 years ago

Why MPS should not touch BBI proposals

Kenyans should be given a chance to air their voice through a referendum.
Siasa
1 year ago
by JULIUS OTIENO AND LUKE AWICH
News
06 March 2020 - 05:00