• His no-nonsense leadership kept his two wives at peace with each other, even breastfeeding each other's children.

• His eldest son from his second wife is Environment CS Keriako Tobiko. 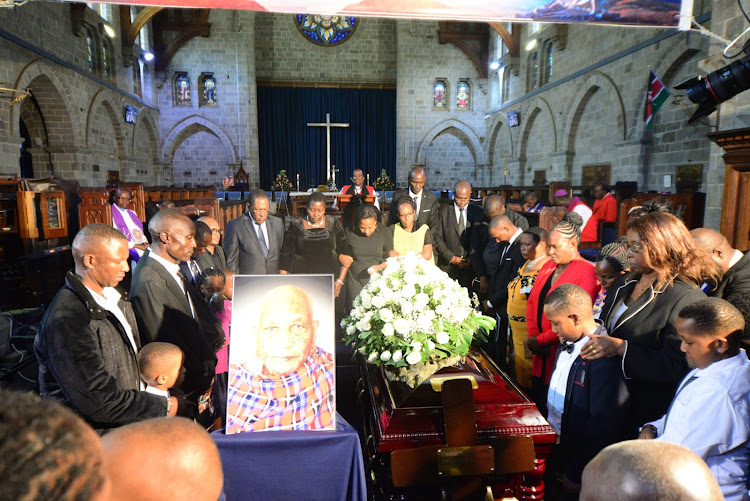 Environment CS Keriako Tobiko and his family during Tobiko Ole Paloshe's funeral at all Saints Cathedral Church in Nairobi on Monday, May 27, 2019.
Image: FAITH MUTEGI

Mzee Tobiko ole Paloshe, the father of Environment CS Keriako Tobiko, was yesterday remembered as a man who ruled his home strictly as expected of a total Maasai man.

He ensured that his two wives lived like sisters, even breastfeeding each other's children.

In fact, the wives hugged and called each other sisters.

"He kept us in perfect discipline and we never quarrelled with each other. When one of us was away fetching firewood or water, the other would take charge of all the children, care for them," Mama Maria Siyiaito Tobiko, his surviving wife, said.

She was the elder wife of the disciplinarian who died of kidney and heart-related conditions on May 15 aged about 96.

CS Keriako was the eldest son with his second wife.

Yesterday, during the burial service All Saints Cathedral, he said he was breastfed by Mama Siyiaito.

He said his father was a watchman but he made sure that all his 14 children went to school.

The peaceful coexistence of the Tobiko wives should be a lesson for today's young people who are killing each other over partner sharing.

At the All Saints Cathedral, Tobiko senior was eulogised as a humble, hardworking father who cherished education and shunned ethnic practices detrimental to the girl child and development.

He had four daughters with the first wife and 10 children with the second.  Most of them are people of note in the society. Keriako is a CS. He is a former director of public prosecutions.

Peris, one of the daughters, is a two-time elected Kajiado East MP since 2013. She is the first female Masaai MP. Elders cursed her for defying the patriarchal norms of her community during her first bid.

Richard Tobiko is the Nation Media Group finance director. He disclosed that  Mzee Tobiko confronted his cancer, rather than coiling in panic.

"He was diagnosed with advanced colon cancer in 2002 and was informed by the oncologist that he only had six months to live," Richard said.

"But instead of coiling in panic as we expected, he retorted that he understood his condition and that six months was a long time."

Rigorous chemotherapy kept him alive.  He succumbed to kidney and heart-related conditions.

He is survived by 49 granddaughters.

Post a comment
WATCH: The latest videos from the Star
by GORDON OSEN News Journalist
News
27 May 2019 - 19:49
Read The E-Paper