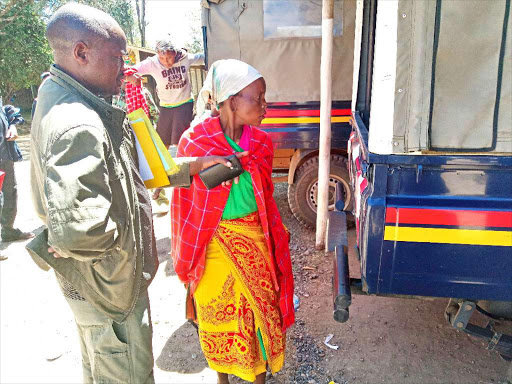 One of the suspects nabbed for taking children through FGM in Narok. /KIPLAGAT KIRUI

The directive which was given by county commissioner George Natembeya is aimed at curbing teen pregnancies that are on the rise within the region.

The checks, he said, are aimed at identifying and prosecuting parents who force their daughters to undergo the cut and facilitate the arrest and prosecution of men responsible for impregnating school girls.

“If we do this, it will curb the high number of teenage pregnancies being reported in this county,” Natembeya told the Star on phone yesterday.

However KNUT boss is appalled by the directive and

“What we want is the law to be followed in regards to handling children. Their rights should not be violated,” Sossion told the Star on phone.

According to the law, pregnancy and FGM tests must be approved by parents or guardians.

The FGM inspection means the private parts of the girls must be physically examined by a medical practitioner for evidence of the cut.

"After conducting the FGM test, what do you seek to achieve? It will only stigmatize the girls” Sossion said.

He said such tests should only be conducted if a complaint has been filed to the police regarding forceful mutilation of girls.

“For a commissioner to issue such a directive, it infringes on the rights of an individual. It’s the same as HIV test. No one should be forced to take a HIV test,”Maiyo said.

He said inasmuch as the association is against FGM, the rights of girls suspected to have undergone the cut should not be violated.

“Some of these girls undergo the cut voluntarily. If the commissioner finds that all 40 girls in a class have undergone FGM, will he send them away?” Maiyo asked.

In defence of his directive, the county boss said girls who undergo the cut feel mature enough to engage in sex, giving rise to the high rate of teen pregnancies.

“I will not sit down to watch girls drop out of school because of something avoidable. We need to fight this vice until we see our girls attain quality education just like boys,” he said.

The county commissioner said the exercise will be conducted professionally.

He said the exercise will be conducted smoothly to avoid students from dropping out of schools once they realized they are pregnant.

According to Natembeya, qualified officials drawn mainly from the health department will undertake the exercise in all the learning institutions in the county.

The team also comprises officers from the provincial administration and the education and gender affairs departments.

Natembeya said girls found to be pregnant must reveal the identity of men responsible while those found to have undergone the cut must record statements with police identifying those behind the vice.

“It is a good thing actually because FGM is outlawed in Kenya. I know pregnancy tests are a ministry directive but this FGM test is welcome because we need to stop the practice,” said FIDA chairperson Josephine Mong’are.

She said parents and relatives are often behind the outlawed practice and subjecting the girls to tests will lead to their arrest and eventually reduce occurrences of the vice over time.

“I’m not so sure if it’s a ministry directive but we support it,” Mong'are told the Star on phone.

Efforts to get a comment from Education CS Amina Mohammed were futile as her phone was off.

Last year, the country experienced unprecedented sporadic teen pregnancies during the KCPE and KCSE exam period with statistics indicating that well over 200 girls gave birth during that period alone.

In Narok county, more than 60 girls failed to write the exams while over 230 others dropped out after they fell pregnant.

Post a comment
WATCH: The latest videos from the Star
by EMMANUEL WANJALA AND KIPLANG'AT KIRUI
News
04 January 2019 - 00:00
Read The E-Paper