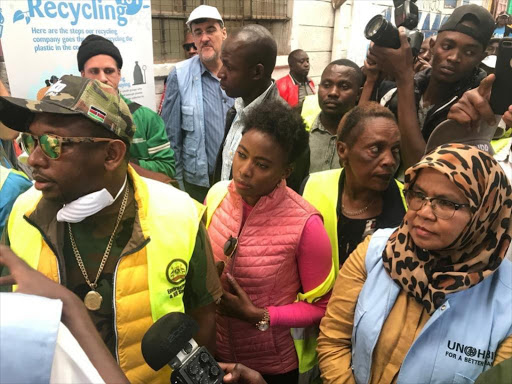 In what appears to be the latest raft of measures to clean up the city, Sonko said the move is aimed at restoring the city’s lost glory as the “green city under the sun”.

“I humbly reminding all building owners within the city to repaint their buildings and repair the small section of pedestrian walkways in front of their buildings,” Sonko said.

The walkways should be repaired with even and coloured paving blocks.

only issue 2019 unified business permits to businesses in buildings and premises that will have been repainted.

He said the paint work and refurbishment of sidewalks should be done during the December festive season.

The governor spoke at Kiboro grounds in Mathare Constituency during the Nairobi monthly clean-up exercise.

“I wish to encourage building owners to take advantage of this festive season when there will be lighter human traffic to bring back the aesthetic beauty of our city and improve the business environment," Sonko said.

The governor said he understands the monetary strain the work will have on businesses but its a worthy cause to beautify the city.

Mombasa county embarked on a similar mission in July where building owners were instructed to repaint their buildings under the city regeneration programme.

Sonko also announced that his administration has launched an aggressive campaign to enforce revenue compliance.

The governor warned that action will be taken against building owners who fail to clear their rates.

“For Nairobi to deliver services, we must collect revenue. I appeal to all building owners to clear their rates arrears to avoid being clamped."

Sonko cautioned corrupt county officials who collude with traders to deny the county government revenue that they will face stern action.

“I'm aware that we are losing a lot of revenue in our markets and advertising sector through some corrupt county officials, your days are numbered,” Sonko said.

The clean-up exercise was graced by UN Habitat executive director Maimunah Mohd Sharif and Fernando Coimbra, the chairman of the committee of permanent representative to the UN-Habitat.

Mohd Sharif praised Sonko for initiating the exercise saying the move is a good gesture towards reclaiming Nairobi City's reputation as one of the cleanest, most beautiful and healthy city in the world.

“My sincere appreciation also goes to the President of Republic of Kenya His Excellency Mr. Uhuru Kenyatta who has been leading these clean-up initiatives from the front and I was very delighted when he recently joined the clean-up event in Uhuru Market,” Sharif said.

Oluoch praised Sonko’s administration for launching the clean-up exercise which he said has helped to make the capital city clean. The MP also appealed to Sonko to rehabilitate Kiboro grounds, a request the governor humbly accepted.

The clean-up exercise which was held across Nairobi's 85 Wards was the sixth and the last one this year.

The success of the clean-up exercise has been enhanced by the large scale beautification exercise that has changed the image of Nairobi.

A drive from the airport, down Mombasa Road to Westlands is a pleasant site dotted with natural grass, palms and flowers.

The beautiful scenery is replicated on Lusaka Road and Jogoo Road.

“I call upon Nairobians to support us by stopping illegal dumping and care of the areas of beautification,” Sonko said while addressing the public at Kiboro grounds.