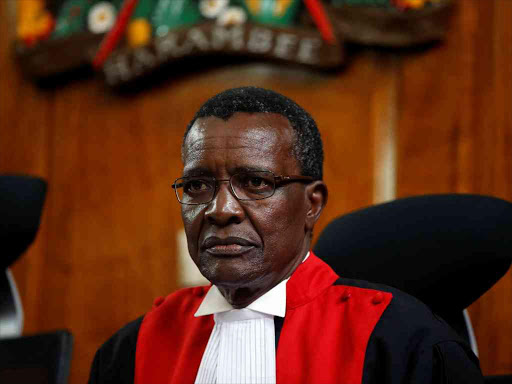 Chief Justice David Maraga presides before delivering a ruling on cases that sought to nullify the re-election of President Uhuru Kenyatta, November 20, 2017. /REUTERS

Raila Odinga's perception of the government as 'illegitimate" has not changed with the Supreme Court's verdict on President Uhuru Kenyatta's re-election.

Uhuru's victory in the re-run on October 26.

One of the cases was filed by former Kilome MP Harun Mwau and the other by activists Njonjo Mue (International Commission of Jurists) and Khelef Khalifa (Muslims for Human Rights).

"The court has unanimously determined that the petitions are not merited," Chief Justice David Maraga ruled on Monday, after considerations by the six-judge bench. "The presidential election is upheld."

his adviser Salim Lone, said: "We in NASA had repeatedly declared before this Supreme Court ruling that we consider this government to be illegitimate and do not recognise it. This position has not been changed by the court's ruling."

In a statement on Monday, Lone said the ruling was not surprising to the coalition, whose candidates Raila and his running mate Kalonzo Musyoka withdrew from the poll.

"This ruling didn't come as a surprise. It was a decision taken under duress. We do not condemn the court. We sympathise with it," he said.

After the ruling, Kisumu youths stoned and burnt a vehicle in Kondele.

They were seen trying to dismantle

the white car as others looked for rocks

to break the windscreen before they set it ablaze.

But in Rift Valley and Central, Jubilee Party supporters celebrated saying justice had been served.