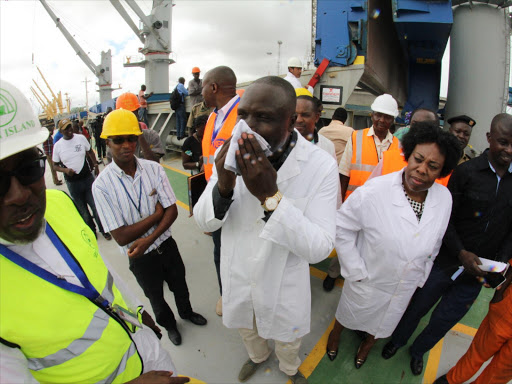 Agriculture CS Willy Bett receives maize imported from Mexico at the Port of Mombasa, May 12, 2017. /FILE

The 29,900 metric tonnes of maize imported last week was

SA imported maize from Mexico last year when they faced an acute shortage.

The excess maize was stored in Durban and sold to Kenya by Inter Africa Grains PTY of Johannesburg, said Mwangi.

"The maize is therefore Mexican white maize which was transhipped into Kenya from South Africa," he noted, adding it was imported by private millers, not the government.

He spoke on Monday at the Port of Mombasa where he witnessed the offloading of the maize and Standard Gauge Railway wagons.

"The ship only takes five days to sail from South Africa. That is why the maize arrived quickly," said the PS.

It had been reported that the first consignment of maize from Mexico arrived last Tuesday.

The Cereal Millers Association said the second vessel will get to the Port of Mombasa in three weeks.

But Kenyans should not celebrate yet since not all millers will have a share of the imported maize. The majority of millers will still continue purchasing from the market where a 90kg bag of maize is selling at between Sh4,300 and Sh4,500. This, according to Hutchinson, means Kenyans will continue to bear with the high cost of unga for another two months.