Around the world, prices of the commodity have been breaking records over the past year 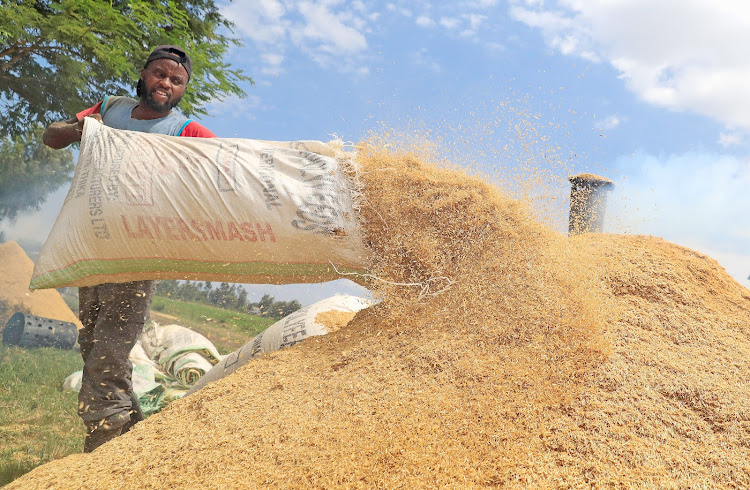 ON DEMAND: A worker offloads a bag of disposed rice husks before burning them in a traditional kiln to produce organic fertiliser in Mwea, on April 6.
Image: REUTERS

It's a tough time to be a farmer.

Just ask Rachael Sharp, a third-generation farmer in the US state of South Carolina, who grows a varied mix of soybeans, corn, wheat, cotton, peanuts and oats.

She saw fertiliser prices for her crops soar 320% last year - the sharpest rise that she, or her father, can remember.

Sharp says some of her fellow farmers aren't planting anything due to the excessive costs.

Around the world, prices of fertilisers have been breaking records over the past year, amidst extreme weather, transport disruptions, and now the Russian invasion of Ukraine.

Russia, which is contending with Western sanctions, produces large quantities of key chemicals used in the production of fertilisers. It also supplies much of the natural gas used to produce ammonia - a major component of nitrogen fertilisers.

The conflict is making other countries aware of their dependency on Russia for fertiliser. The US government has responded by investing in innovative, domestically made fertilisers, but it will take time for those investments to pay off.

Soaring prices are causing farmers to adjust their planting strategies. They're also driving interest in alternatives to conventional fertilisers.

Environmentalists have long called for such a move. Producing traditional fertilisers is energy-intensive, resulting in significant carbon dioxide (CO2) emissions.

But nitrogen fertilisers have a second sting. When they get into the environment they spur the production of nitrous oxide, a potent greenhouse gas.

One relatively straightforward measure would be cutting down on the amount of synthetic fertilisers used.

Fertiliser overuse is an enormous problem. It's been estimated that globally, crops use only 35% of the nitrogen and 56% of the phosphorus applied to them; the remainder settles in the environment.

This varies widely, of course. Low-income farmers may be grappling with too little fertiliser, not too much.

But overall, substantially more fertiliser is being added to fields than is needed - increasing costs and environmental damage.

Overuse "is a huge challenge in our field," says Bhupinder Farmaha, a nutrient management specialist at Clemson University in the US, as well as an agricultural extension agent who works with farmers like Ms Sharp.

Overuse is due in part to tradition, and in part to outdated recommendations for fertiliser application that does not take account of specific environmental conditions.

Sri Lanka came up with a radical solution to the problem: the government abruptly banned chemical fertilisers in April 2021.

Subsidies of chemical fertilisers had increased yields but also led to dependence and inefficient application.

The effects of the ban were catastrophic. Farmers who had depended on chemical fertilisers were suddenly scrambling for organic alternatives, with little time to prepare.

Very few Sri Lankan farmers were accustomed to organic fertilisers, which in any case were in short supply.

While the ban was eased in November 2021, Sri Lankan agriculture and the economy are still feeling the shocks.

Saman Dharmakeerthi, who heads the Department of Soil Science at Sri Lanka's University of Peradeniya, believes that "the take-home message is that if you want to do something, do it with statistics and research evidence".

A more measured approach is to use technology that can cut back on fertiliser use.

And the more precise application can reduce the amount of fertiliser used, as can slow-release fertilisers.

Ms Sharp is open to such technologies. "Not every place in the field needs the same prescription," she explains. "I think that's where Daddy and I differ. He's used to just putting out the same amount because that's what they did for years and years."

Another way to reduce the use of chemical fertilisers would be to adopt farming methods that improve the quality of the soil.

Conservation tillage, where the soil is disturbed as little as possible, and the use of cover crops like ryegrass can enhance fertility while reducing the climate impacts of agriculture.

Crop rotation can contribute to soil health as well. Sharp says that on her farm; "We try to plan our crop rotation in a way where the crop we're planning on planting uses the nutrients from the previous crop."

There is also a renewed interest in organic fertilisers.

Leigh Ann Winowiecki, a soil systems scientist at the research organisation CIFOR-ICRAF in Nairobi, Kenya, says farmyard manure has a host of benefits: providing nutrients to the plants, improving soil structure, and increasing the soil's ability to hold water.

"Our research has also shown that inputs of compost and composted farmyard manure increases the effectiveness of synthetic fertilisers," reports Winowiecki.

She says that in eastern Kenya it could be a practical solution as "most farmers have at least one cow near the homestead".

While compost and manure can be effective soil supplements, Dharmakeerthi questions whether they can replace nitrogen-based fertilisers altogether, due to their lower levels of vital nutrients.

It will be very difficult to move away from the world's current dependence on these high-yielding chemical fertilisers, particularly to grow enough animal feed to satisfy the growing global demand for meat.

An additional problem is the availability of organic fertilisers. Sharp reports that chicken litter is an effective fertiliser but has been hard to source this year. Where it was available, prices were about 200 per cent higher than last year.

It also smells bad. "The people around town hate it because it stinks to high heaven," says Sharp.

A different kind of beneficial organism is algae, which for centuries has been used to enhance crops. The marine biotech company Ficosterra is seeking to update this tradition and is currently trialing algae-based fertilisers produced in Spain and Mexico.

It also extracts nutrients from a seaweed called Macrocystis Piryfera, which grows in dense forests along the American Pacific coast and sells as a fertiliser.

For his part, Dharmakeerthi sees great potential in organic waste, such as fermented fish waste. "That is the best alternative," he says.

The challenge is to develop technologies to extract the nutrients in a cost-effective way, he says.

One positive aspect of the current fertiliser crisis is soaring interest in ecologically friendly and widely available types of fertiliser. "Because of this scarcity there will be a big research boom," Dharmakeerthi predicts.

Back in South Carolina, Sharp has turned to waste ash produced at a local paper mill. All she had to pay for were transport costs.

"It actually changed the pH in our favor by about a percent," Sharp reports. "That's not going to take the place of a potash or a chicken litter, but it does take the sting out of the prices."