It has a competitive advantage in terms of geographical position and capacity.

•Lamu has the proximity of handling cargo between ports in Tanzania, South Africa, Middle East, Europe and Oman's Port of Salalah. 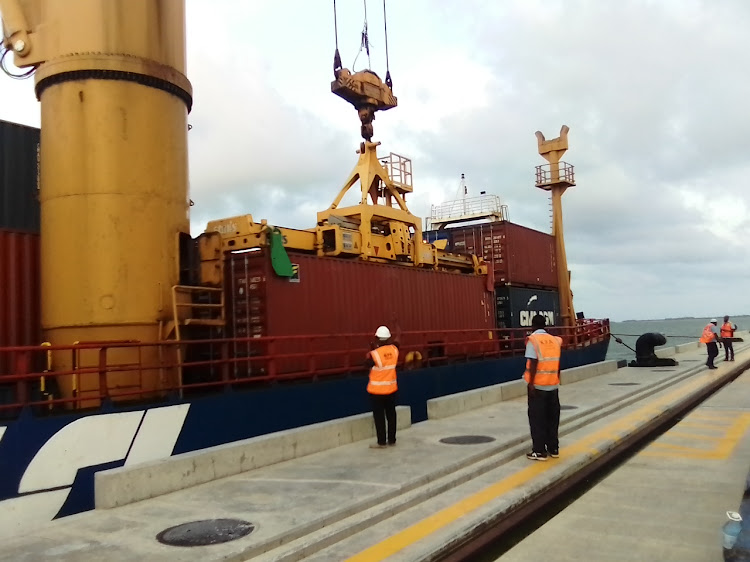 Kenya could be a major player in transhipment business with the new Lamu Port, as it starts to attract business two months after commissioning by President Uhuru Kenyatta.

The President officially launched the country's second major sea port, after the Port of Mombasa, on May 20.

During the time, the facility received tow vessels—MV CAP Carmel from Singapore and Mv Seago Bremerhavel.The two ships were on transit from Mombasa and Dar-es-Salaam ports, respectively.

Last Thursday however marked a key milestone for the port which is being fronted as a transshipment hub in the region.

Transshipment is the movement of goods or containers to an intermediate destination, then to another destination, with among reasons being to change the means of transport during the journey, known as transloading.

Kenya can become a major player for transshipment and maritime trade. The government should give space to shipping lines to put up berths. This way, they will guarantee business.

This mainly involves offloading of cargo from larger vessels, which cannot call at small ports, which are then loaded to feeder vessels for shipment to final destinations, and vise versa.

KPA general manager in charge of Lamu Port, engineer Abdullahi Samatar, said the arrival of these ships signifies that Lamu Port is ready for business.

“We expect more transshipment traffic to this port which has a competitive advantage in terms of geographical position and capacity to handle bigger vessels," Samatar said.

Lamu Port has a bigger vessel handling capacity than Mombasa.

Its berths are 400 metres long compared to Mombasa’s 300 meters average while the depth at Lamu is up to minus 17.5 meters against 15 meters at the Port of Mombasa.

The government has invested Sh40 billion in constructing the initial three berths of the planned 23-berth facility.

Lamu can handle Post-Panamax ships. This are vessels that cannot pass the Panama Canal, with the word Post-Panamax being used to decribe world's biggest vessels.

Last week's handling of transshipment cargo hence sets the stage for competition with the Port of Durban, the largest and busiest shipping terminal in sub-Saharan Africa which has been enjoying huge transshipment business.

Lamu has the proximity of handling cargo between ports in Tanzania, South Africa, Middle East, Europe and Oman's Port of Salalah.

More shipping lines are slowly warming up for the use of Lamu Port, according to the Kenya Ports Authority, among them world’s largest container shipping company―Maersk.

Known as Mærsk A/S, the Danish business conglomerate with activities in the transport, logistics and energy sectors, is a regular at Mombasa and is said to be keen to be calling at Lamu.

Hapag-Lloyd, which is among the top 10 shipping lines in the world, in terms of volumes, is also looking at the possibilities of using the new port.

According to Hapag-Lloyd country manager Prashant Sindhwani, Lamu Port has potential for transhipment business, even as it provides a new transit route for Ethiopia and South Sudan destined cargo.

Meanwhile, KPA has set aside Sh4 billion for the purchase of equipment for the port as it seeks to increase cargo handling capacity at the facility.

According to acting managing director John Mwangemi, the port will have modern technology and will be a leading port for transshipment business in Africa.

"We have already started the procurement process of equipment and we expect to start receiving them within the next four months, throughout April next year," Mwangemi said.

Kenya Revenue Authority (KRA) has deployed the new ICMs Customs System at the Port to ensure faster clearance of cargo and enhance turnaround time to secure competitive advantage in the shipping industry, and pull more business to the port.

The authority says it will continue to support and facilitate international trade and will work closely and partner with industry players that includes; shipping lines, importers, exporters, clearing agents and logistics to enhance trade and market the port.

“We are encouraging other shipping lines to use the Lamu Port and direct the biggest vessels to be served at the facility given that the port has bigger capacity, efficient customs clearance process and waiver of transshipment fee,” said Joseph Tonui, KRA Regional Coordinator, Southern Region.

It is expected to create a new trading corridor, mainly connecting Kenya to Ethiopia and South Sudan.