The economy bounced back with a 7.5% growth last year

•This was supported by measures and incentives announced by President Uhuru Kenyatta in March 2020.

•The government has also announced a number of tax incentives to help growth the manufacturing sector and businesses beyond 2022. 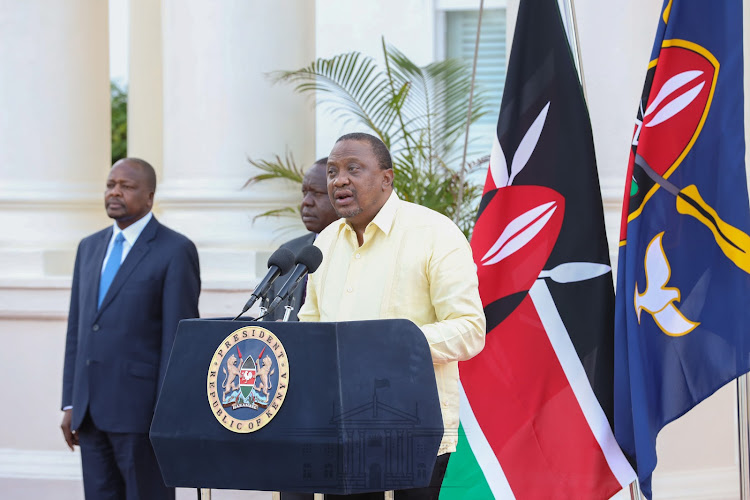 Tax reforms and monetary policy stabilisation by the government helped cushion the Kenyan economy during the Covid-19 pandemic, with a major bounce-back witnessed last year.

President Uhuru Kenyatta in March 2020, when the pandemic struck, also directed that income tax (Pay-As-You-Earn) and resident income tax (corporation tax) be slashed from 30 per cent to 25 per cent.

Small business owners whose annual earnings did not exceed Sh5 million also benefited from a reduction in turnover tax, from three per cent to one per cent.

Uhuru also announced a temporary suspension of listing with Credit Reference Bureaus for individuals or business whose loan accounts fell overdue or were in arrears.

There were also a number of austerity measures that were targeted at increasing cash flow in the market.

Ministries and state departments were also directed to pay at least Sh13 billion of verified pending bills within a period of three weeks.

A state-backed Credit Guarantee Scheme  was also initiated with an initial seed capital of Sh10 billion and was to be released in two tranches of Sh5 billion in 2020-21 and 2021-22.

The scheme was aimed at bailing out businesses, mainly SMEs, a time when majority were struggling to remain afloat.

“The number of employed people fell to 17.4 million from 18.1 million at the end of 2020,” National Treasury CS Ukur Yatani had said during the release of the survey.

The measures by government however helped the economy bounce back with a 7.5 per cent economic growth last year, the Economic Survey 2022, released this month shows, with more than 753,800 jobs created.

The growth was driven largely by the recovery of key sectors from the Covid-19 pandemic and sound macroeconomic environment, helped by government intervention measures.

The 2022 Economic Survey by the Kenya National Bureau of Statistics (KNBS) indicates last year's growth was driven mainly by education (214%), accommodation and food services (52.5%) and financial and insurance activities (12.5%).

Other drivers of last year's growth were manufacturing (6.9%), wholesale and retail trade (7.9%) and transport and storage (7.2%).

Accommodation and food services showed an impressive revamp after suffering a massive -47.7 per cent contraction at the height of the Covid-19 pandemic in 2020.

"The country’s macroeconomic environment is expected to remain stable despite the likelihood of a rise in inflation, weakening of the Kenyan Shilling against its major trading currencies and significant rise in energy prices," KNBS director general Mcdonald Obudho noted during the release of the survey, in Nairobi.

Meanwhile, other sectors of the economy are likely to continue on a growth trajectory after the suMANUFACTUREccessful containment of the Covid-19 pandemic and the expected peaceful general election.

The country has also registered growth in the value chain addition to global business and a rise in exports.

Growth was largely attributable to an increase in exports of horticulture (Sh165.7 billion), tea(Sh130.9 billion) and coffee(roasted) Sh26.1 billion.

Other key exports were titanium ores and concentrates and articles of apparel and clothing accessories.

During the year, the total volume of trade amounted to Sh2.894 trillion, rising from Sh2.287 trillion, the survey by the Kenya National Bureau of Statistics (KNBS) shows.

Together with horticulture and the agriculture sector, manufacturing helped increase domestic exports by 17.5 per cent from Sh567.4 billion in 2020.

“Food and beverages category accounted for the largest proportion of all domestic exports at 43.1 per cent followed by consumer goods at 27.6 per cent,” says the survey.

Manufacturing recovered in 2021 with the sector’s real value added growing 6.9 per cent compared to a negative 0.4 per cent in 2020.

The share of the manufacturing sector to GDP was 7.2 per cent in 2021, the survey indicates.

Sub-sectors that registered major growths in volume of out put were leather and related products, dairy, motor vehicle, sugar, meat and meat products, and cement.

To support growth of the sector, the National Treasury has proposed a number of incentives that will make it attractive and competitive to manufacturers in Kenya, with a keen target on the motor vehicle industry.

During his 2022/23 Financial Year budget, Yatani propose to exempt from VAT inputs and raw materials used in the manufacture of passenger motor vehicles.

Further, the CS proposed to exempt from VAT plant and machinery for use by manufacturers of pharmaceutical products.

The government is also keen to bring down the cost of power by 30 per cent , a key utility in manufacturing.

“The government will continue to support Kenya Power and Lighting Company to increase its efficiency while sustaining systematic reduction in tariff to electricity users,” Treasury notes.

The recent 15 per cent tariff reduction by the government has not only brought immediate relief to the consumers but also led to realization of broad benefits including reductions of prices of goods by manufacturers.

The government has been working closely with the manufacturing sector lobby-Kenya Association of Manufacturers (KAM) and the Kenya Private Sector Alliance(Kepsa) to spur growth of industries which are dominantly private owned.

The collaborations have also seen a number of trade agreements and deals reached.

Among them is the recent signing of a detailed private sector agreement between Kenya and the United States of America, in October last year, that seeks to expand trade and investments.

Speaking in New York, President Uhuru said the pact is part of the efforts to support the growth of Kenyan SME sector as a key enabler of wealth and employment creation.

He noted that the Kenyan and US economies are largely driven by SMEs and the agreement would help accelerate Kenya's economic recovery efforts from the ravages of the Covid-19 pandemic.

“I have always had the opportunity to say that Kenya is a country where people always wonder where the resilience of our economy comes from. A country where despite a myriad of shocks, occasioned over the years, always prove to be very resilient,” he said.

Meanwhile, Kenya’s capital of Nairobi remains the main entry and home to multinationals operating or seeking to tap into the wider East African region market.

It is the regional African headquarters for more than 20 multi-national companies with more expected to open soon.

These include MasterCard Foundation which wants to set up its country office in Nairobi.

Others include the International Fund for Agricultural Development (IFAD) Regional Office for East and Southern Africa and the Temporary Secretariat of the African Audiovisual and Cinema Commission (AACC) in Kenya.

This was approved by the government on May 12, in a Cabinet meeting chaired by President Uhuru at State House, Nairobi.

Cabinet also signed an agreement with the Rockefeller Foundation - a multinational American entity looking to improve the lives of people and the planet through innovation.

The government further reviewed and approved and ratified bilateral agreements with other countries including the agreement between Kenya and America on Employment of Dependents of Official Employees.

Also approved was the agreement on defence cooperation between Kenya and Turkey, Egypt, Malawi, the Democratic Republic of Congo, Northern Ireland, the United Kingdom and Switzerland.

Deloitte noted that the welfare loss will be compensated by the more incomes earned from the additional employment opportunities.
Business
1 month ago

Dena said that there's no country in the world that has been able to develop without borrowing.
News
1 month ago
by MARTIN MWITA Business Writer
Business
23 May 2022 - 10:55