• President referred him to Bethwell Ogot, who advised lying low but he still published

He was a 27-year-old junior lecturer at the University of Nairobi when he was frogmarched to the presence of President Jomo Kenyatta blindfolded. This was 1971.

His crime? He had begun documenting the histories of Mt Kenya East communities. This angered the cabal around the president, who were enforcing a single cultural identity for the region.

Prof Mwaniki Kabeca says President Kenyatta was not amused and rebuked the politicians. He has since written at least 10 books, documenting the histories of Kirinyaga, Embu, Mbeere and Chuka communities. He is arguably the region’s most eminent historian alive.

Fifty years since the encounter with the President, Prof Kabeca says he is not amused by the ruckus after the May 22 coronation of National Assembly Speaker Justin Muturi. He also explores the legitimacy of councils of elders in Kenya’s political scene.

Prof Kabeca, now 77 years old, is the former academic registrar of the Kenya Methodist University, and has taught at the University of Nairobi, Kenyatta University, Egerton and the South Eastern Kenya University, since 1970.

The Star: You have written more than 10 books on the history of Mt Kenya communities. What motivated you to do that?

Prof Kabeca: First it is the very fact that I love history because to me history is like the foundation of a building. If you don’t have a firm foundation of any building, you cannot place three or four stones on top of the other without it collapsing.

All the knowledge we have has come either from history or has history in itself and everything will stand firm for as long as you give it a good foundation. Also, some of the best scientists we know were characters in history and they left us with whatever they taught. A good example is Isaac Newton, a well-known scientist from the 17th century who discovered the laws of gravity and motion and invented calculus.

What challenges did you face documenting the histories of the communities?

One of them is that at that time you could not find anything written about them. The little you found was very discriminative because the writers were the white men who believed we had no history because to them history must be written. They were wrong because history existed, whether you wrote it down or you didn’t.

There are rumours Jomo Kenyatta himself punished you when you published the book “The living history of Embu and Mbeere to 1906” in 1973. Please comment on that. 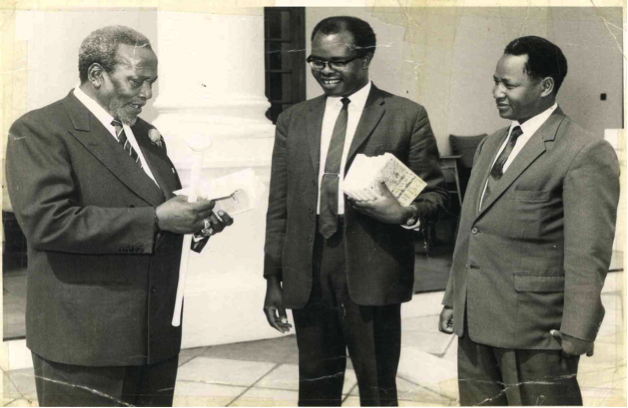 I was taken to Kenyatta blindfolded and everybody was alert, ready for drama

My quarrel with Kenyatta was not on history. It was on the writing of a book in Kiembu language, my first book called “Ndai, Nthimo na Ng’ano iri Ukua wa Aembu”, meaning riddles, proverbs, stories and legends as the heritage of Aembu. Through which I wanted to pass the fact that although we understood the Kikuyu language, we were not Agikuyu.

Since I had written it in Kiembu, some people, especially the Kikuyu, were not happy since they were dominant over Embu simply because the imperialism came to Embu through the Agikuyu side of Kenya.

This happened since the Kikuyu had the privilege of guiding the missionaries who came to Embu soon after the political defeat of Embu by the white men in 1906. The missionaries settled at Kigari in Embu and started training the residents Kikuyu language because they were guided by Kikuyu who didn’t know Kiembu. I felt it was not okay for people of Embu, who struggled to speak and understand Kikuyu language. My first idea was to translate the Kikuyu Bible into Embu language but I was denied the permission by the authorities.  This is when I decided to write the book, which made some feel I was trying to overturn the Kikuyu dominance in Embu. They reported this to Kenyatta.

I was taken to Kenyatta blindfolded and everybody was alert, ready for drama. But since the President was educated, he requested for the manuscript and after going through it, he didn’t find anything seditious. I was then forwarded to Prof Bethwell Ogot, who was then my lecturer at the now University of Nairobi. Prof Ogot warned me to be careful and wait until the heat was over, but I went ahead to print the book in 1971.

Do you think the identities of Mt Kenya East communities (Embu, Mbeere, Chuka and Kirinyaga) are often lost in the Gema umbrella?

Yes. But that was greatly during the times of the late Kenneth Matiba, Njenga Karume and John Michuki. Mt Kenya was more of one community. The present President (Uhuru Kenyatta) recently called for a meeting at State Lodge in Sagana and gave a forum for Mt Kenya region people to re-identify themselves, something I don’t think succeeded. It is only recently that Mt Kenya East seemed to revive that identity. The leaders from Mt Kenya East have begun to identify their region, something that was not there in the past. In the past, leaders from this region had already resigned to the fact that Mt Kenya East has long been swallowed up by Gema. Gema was traditionally represented by only the central region.

I was shocked to hear some governors from Central oppose the coronation [of Muturi]. But what pleased me is that the people remained united and supported the ceremony

The recent coronation of National Assembly Speaker Justin Muturi as Mt Kenya spokesman exposed deep divisions that were probably always there in the region. What’s your view on this?

Frankly speaking, the opposition has been by the minority and people with vested interests. I was shocked to hear some governors from Central oppose the coronation. But what pleased me is that despite their opposition, the people of Central Kenya remained united and continued to support the ceremony. However, in a democratic society, not everybody says yes, but the majority wins.

What is the role of the emergent councils of elders (e.g., Talai of Kalenjin, Nchuri Ncheke, Nyangi Ndiiriri of Embu) in Kenya’s political future?

Those organisations are really the foundations of the societies where they are based. To me, their influence spreads to the neighbours or strengthens their neighbours. And of course, when these societies combine, they make up a nation.  The elders develop where they are situated. That is why you will not find the Nchuri Ncheke of Meru in Embu or Talai of Kalenjin in Meru. They shape the leadership of their communities, and end up passing the same leadership to the nation. The elders act as a balancing rod in the society, and that’s the only role they play in Kenya politics.

Many politicians are nowadays seeking the blessings of their elders before running for office. How important is this coronation?

It is very important. It has opened a new chapter for our nation. It identifies the leaders with their communities, giving a boost to inclusivity in Kenyan politics. The elders know they will not live forever and they need to crown someone who can represent them everywhere after they are gone.

But most Kenyans are now Christian. Where is the place of the church in choosing national leaders?

That has been a very controversial issue, and it’s not new. Some of the conflicts in our country were brought about by this idea of colonial Christianity, which barred people who joined the colonial church from taking oaths because the missionaries believed it was unreligious, unlike Kenyans who believed in the oath as a symbol of unity.

Kenya’s Game of Thrones is boring and predictable

So how can Kenya forge national unity despite the growing ethnic identities?

Embracing ethnicity is natural. What should be done is that people should get educated since there is no rule that one community should produce leaders all through. We should restructure the Constitution to allow national leadership from one community to another. This will build a united country and in the long run, we shall find that we are all included.

What can you tell your fellow historians and the upcoming historians?

I want to tell them to investigate on some of the things I am saying. I am not the only one who can do this. Each can join and conduct research on the side of history they like best. It is not only history that can lay the foundation for our country. Other subjects like agriculture, which has been there since time immemorial, are also historical.

What is your call to the people of Kenya in regards to the history of the country and their communities?

Each community should retain the healthy part of its culture because it carries your identity right from the time you’re created until today. They should learn their history because they will appreciate the things they see and how things appear to them, which will give them the urge to make them better.

Is white privilege in Kenya a product of colonisation?
Post a comment
WATCH: The latest videos from the Star
by BENJAMIN NYAGAH
Big Read
07 June 2021 - 05:00
Read The E-Paper