Said Uhuru has not completed his term and cannot be replaced prematurely.

•Muturi was crowned the Mt kenyaspokesperson in the shrine on May 22. 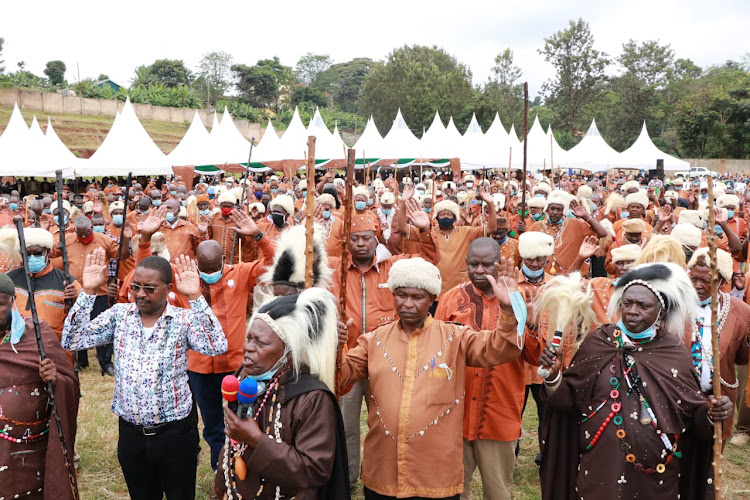 Elders from the Kikuyu Council of elders and Kiama Kia Ma say they have nullifed the elevation of National Assembly spokesman Justin Muturi as spokesman for the Mt Kenya region.

The elders who spoke after a cleansing ceremony on Friday said their prayers had invalidated the coronation just two weeks after another set of elders conducted the ceremony.

The coronation was led by Kiama Kia Ma national patron Kung’u Muigai.Then elders announced Muturi would lead the region as the country heads to the general elections.

They said Muturi had emerged the best from a list of possible leaders who were vetted before they settled on him. They said their actions were geared towards healing disunity experienced in the region since the last elections.

But the coronation was condemned by  a faction of elders who said it was political and should not have been done at the "sacred" shrine.

He added their decision to have the shrine cleansed and undo Muturi’s crowning as the leader of the Gema communities was purely cultural, emphasising they harbored no issues with communities from Mt Kenya East.

He said it was wrong for elders to hand over the leadership of the region to Muturi while the President Uhuru Kenyatta is still in power.

“We have to remain united and keep off people who want to divide us as a region and engage in activities opposed by the majority,” he said.

Elders opposing the coronation had said installing Muturi as the communal leader would provide a reprieve to  communities from Mt Kenya East, including  Meru, Mbeere and Embu, who had complained  they have continuously supported leaders from Central and had grown tired.

“When we met the President at the Sagana State Lodge, elders from the three communities said they would no longer support leaders from the Agikuyu community,

"They said even after throwing their weight behind them they are abandoned soon after elections,” Kiarie Combou, Kiama Kia Ma chairperson in Murang’a, said.

Elder Dominic Ngera said it was wrong for Muturi to be installed as a political leader in the shrine used for prayers.

Many attendants of the coronation carried items that should not been allowed in the shrine and were unclean, he said.

Ngeera urged the county government to strictly guard the shrine as its custodian and ensure only the right ceremonies are conducted there by the right people.

Kikuyu Council of Elders chairman Wachira Kiago re-iterated the President is still the spokesperson of the region until he completes his term.

He said Muturi was crowned by elders who are not officials of the two councils of elders and called the the event an abuse of the shrine.

While dismissing the coronation he said soiled the shrine, the governor supported the elders for invalidating it, saying the elders were wrong to conduct it in a place reserved for prayers.

Post a comment
WATCH: The latest videos from the Star
by ALICE WAITHERA Correspondent, Murang'a
Central
06 June 2021 - 06:27
Read The E-Paper