Kenya’s Game of Thrones is boring and predictable

• Ever since Independence, the more things change the more they remain the same 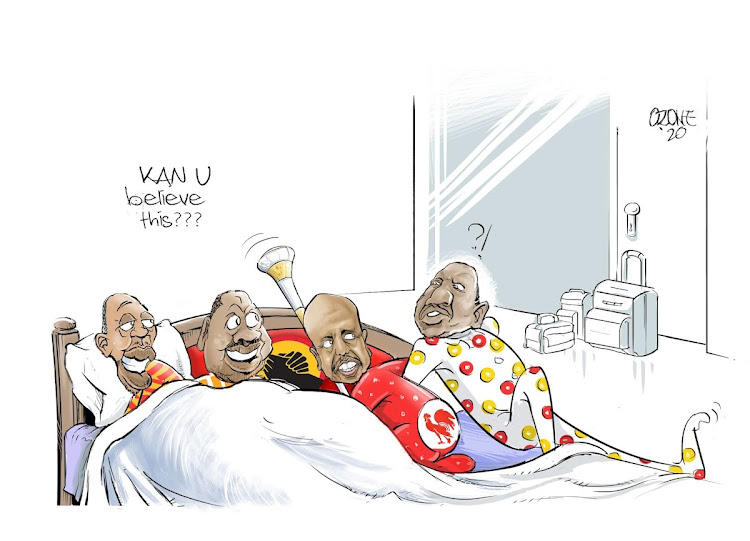 How long will it take before Kenyans are bored of the same old names that have dominated our politics since before Independence?

If aliens had been to earth and studied Kenyan politics in June 1965, they would have witnessed the first shots fired in the political war that, like it or not, has defined a large part of the country’s politics ever since.

In a speech delivered in Kisumu to mark the third anniversary of the achievement of internal self-government or madaraka, Vice President Jaramogi Oginga Odinga launched his first direct attack on his boss President Jomo Kenyatta.

Jaramogi, who had been at the forefront of the campaign for Jomo’s release from detention by the British, was clearly fed up with the country’s pro-western ideological stance led by Kenyatta and arch-rival Tom Mboya.

In his speech, he said his erstwhile buddy Jomo had been seduced by the British and through Mboya, the Americans, and had fallen just short of taking orders from the two western powers.

To put it in some sort of context, Jaramogi’s speech came shortly after Jomo and Mboya had shut down Jaramogi’s pet project, the Russian-financed Lumumba Institute, saying it was never intended to be an ideological base.

Jomo had also sent back a shipment of Russian arms that had been donated free of charge by the Soviet government. He claimed they were second-hand and of no use to Kenya’s “modern army”.

Meanwhile, Jomo and Mboya, with the assistance of Mwai Kibaki, had come up with a manifesto for what they called African Socialism, hoping to counter Jaramogi’s ties to Chinese and Soviet communism.

Jaramogi would stay on in the ruling party, trying to change things from within, for about another year before the infamous March 1966 Kanu conference in Limuru showed him the door.

If the aliens returned in March 1977, they would have found it easy to catch up.  The aliens would also think that the country’s politics was a dance between two or three families.

After the previous year’s change-the-constitution campaigns had been shot down by Charles Njonjo and his ruse about it being treasonable to imagine the death of the President, some in Gema hit on another way to deny Vice President Daniel arap Moi his chance at succession.

The plan was to encourage a detente between Jomo and Jaramogi ahead of the Kanu elections that year.

Jaramogi would then run for the Kanu vice presidency, a win would be engineered and when Jomo eventually died, Jaramogi could take over and then always be reminded to whom he owed his position.

However, the Kanu election was called off and by August 1978, Jomo had died, leaving the Constitution to have its way.

On their third study visit, the aliens would have found Kenya in 1980 under a President Moi, who was feeling secure enough to bring his predecessor Jaramogi back into the fold on his own terms.

Had they stayed on long enough, the aliens would have seen this experiment all end in political tears when a year later, Jaramogi was slung out into the political cold again for taking potshots at dead Jomo’s shadow.

If the aliens had returned on Madaraka Day 1993, they’d have found Moi and Jaramogi smiling and shaking hands and talking about a concept they had discovered called “cooperation” at the Madaraka Day Garden party.

If the aliens had returned to Harambee House in March 2018, they would have seen two vaguely familiar men shaking hands on the front steps of the building and perhaps been amused at how much things had changed but were still the same.

I, for one, am bored by the sameness of Kenyan politics six decades in.

Hopefully by the time my hypothetical aliens return to study the Kenyan political scene, the descendants of Jomo, Jaramogi and Moi, for that matter, will have found fields of interest other than politics and Kenya will finally have moved on.

Post a comment
WATCH: The latest videos from the Star
by Mwangi Githahu Columnist
Lifestyle
06 June 2021 - 05:00
Read The E-Paper