VOICES FROM THE WILDERNESS

MUTUNGA: Should we expect yet another political handshake?

• The sooner we Kenyans realise the political elites cannot deliver on any of our material interests, the better. 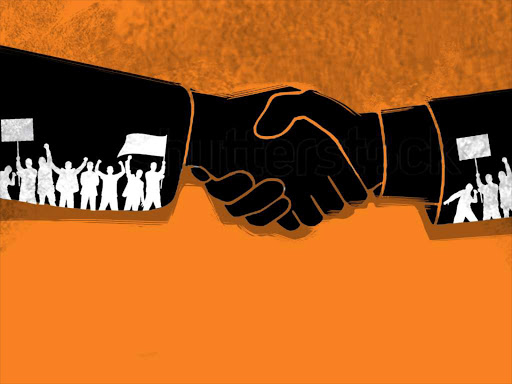 UNITY: Illustration of a handshake
Image: THE STAR

Deputy President Rigathi Gachagua has been very vocal that we should not expect a political handshake between Azimio leader Raila Odinga and the Kenya Kwanza administration.

Notwithstanding these utterances, we must wait and see.

Political handshakes in Kenya have always reflected diverse interests, but fundamentally anchored in the interests of the ruling elites and those of their foreign masters.

Such handshakes have been about the occupation of political space solely by the ruling classes and their coalitions; the exchanges of huge sums of money, ensuring the Godfather in power protects all interests of the ruling elites while receiving “gifts” from all and ensuring no alternative political opposition takes root in this country since the banning of Kenya People’s Union in 1969.

Direct and representative exercise of our sovereign power

The direct exercise of Kenya’s sovereign power is given to the people of Kenya generally, but also to their organisations in what we call the civil society.

The Constitution envisions that representative sovereign power can be delegated but betrayed by the political elites hence the importance of exercise of direct sovereign power of the Kenyan people.

That, in a nutshell, is the promise of democracy that our Constitution decrees. The Constitution envisions that all Kenyans will be politicians in all societal matters, while delegating sovereign power to electoral representatives, if they remain loyal to the political will of all citizens.

To breathe life into their sovereign power in the Constitution, Kenyans must eradicate the politics of division and its monetisation in the country.

Such politics have weakened the direct exercise of sovereign power of the people through such divisions as racism, ethnicity, gender, generation, region, religion, class, clan and the English Premier League. These divisions also make it difficult for politics of issues and ideology to take root in our country.

Ironically, Kenya Kwanza has resurrected the politics of issues and class in no small measure. Capturing the imagination of hustlers of their class war against the dynasties/the rich in itself cannot guarantee its implementation by Kenya Kwanza, a coalition that protects dynastic interests.

Populism and fascism take place in politics the world over given certain economic, social and political circumstances. History records its impending death and closure when its exposure is complete and final. This is yet another political opportunity to let Kenyans know that Kenya Kwanza has given us a great opportunity to monitor its implementation of electoral promises.

We have not seen much of the Azimio opposition in the critical 100 days of the administration of Kenya Kwanza. The narrative by Azimio in its campaign was that it had radical past credentials that it was going to resurrect. It was also its narrative that it was the lesser of the two evils that sought office.

Why Azimio thought that choosing between two evils is a choice is, indeed, a political campaign narrative I have not been able to fathom. Evil will always be evil.

The sooner we Kenyans realise the political elites cannot deliver on any of our material interests, the better. The quest and search for an alternative political leadership that is credible can only take root after such realisation.

• Know all the political handshakes

Kanu and Kadu in 1964. Kibaki and Moi in 1992 when Democratic Party dealt a death blow to the then emerging opposition unity. Moi and opposition politicians form IPPG in 1997, thereby killing the project of the National Convention Assembly /National Convention Executive Council. Moi and Raila and their New KANU that died after “Kisirani Kasarani” in 2002. The “Kibaki Tosha” handshake between the Moi orphans from Kasarani and Kibaki’s National Alliance Party of Kenya in 2002 that gave us Narc. Little-known is the Kibaki-Moi handshake of 2002 that extinguished any hopes of Uhuru, “Moi’s candidate”, being elected.  In 2018 Uhuru-Raila handshake that Miguna nicknamed “handcheque.”

All these political handshakes have one common denominator — they occupy the entire political space for elite interests.

Any individuals, organisations, and movements that wade into the path of handshakes should know what they see is what they will get. The Communist Party of Kenya is an example of this.

A faction of a party that claimed to be for workers and peasants, and generally the working classes, joined Kenya Kwanza. CPK split into two factions and its political momentum was weakened.

A comrade from Tanzania asked me, "Willy, Kweli Chama Cha Wavujajasho kimenunuliwa na Chama cha Wavunajasho? (Willy, is it true the party of the working classes has been bought by their exploiters?"

• Go back and link up with the ideology, politics, and the manifesto of KPU, the only party we can call an opposition party in the history of Kenya.

KPU’s Wananchi Declaration still has a radical vision to aid the implementation of the anchors of the 2010 Constitution, and the rescuing of its weakness.

Use your innovation and creativity to put the declaration in the current context of Kenya. Social movements and organisations, and Kenyan people in general are the lifeblood of any political party. Indeed, direct exercise of sovereign power of the people must be reflected in this quest for alternative political leadership.

• There should never be any doubt that you are the alternative political leadership to what we currently have. That is not difficult to say but your actions must speak louder than your words.

Willy Mutunga, Chief Justice and president of the Supreme Court of Kenya, 2011-16

Post a comment
WATCH: The latest videos from the Star
by WILLY MUTUNGA
Siasa
07 January 2023 - 10:53
Read The E-Paper