The government’s approach to the pandemic has been characterised by poorly thought out, brutally enforced lockdowns

• Kenya has vowed to ramp up vaccinations, aiming to have at least 16 million people inoculated by June next year.

• However, the roll out of the Covid-19 vaccination programme has been — not unexpectedly — hampered by outright cheating, confusion and profiteering. 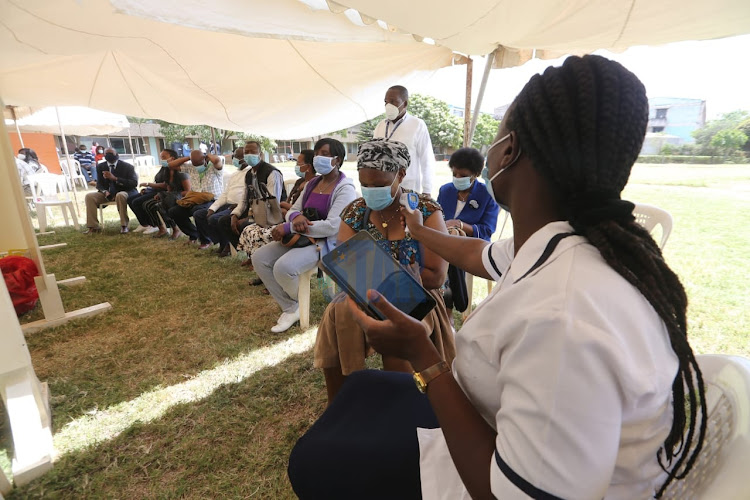 A nurse at KNH registers persons above 58 years for the Covid-19 vaccination on March 31, 2021
Image: FREDERICK OMONDI

As Kenya is ravaged by a third wave of infections and deaths, the government has instituted a partial lockdown to curb the spread of the virus.

It has vowed to ramp up vaccinations, aiming to have at least 16 million people inoculated by June next year.

However, the roll out of the Covid-19 vaccination programme has been — not unexpectedly — hampered by outright cheating, confusion and profiteering.

Much of the international angst about equitable access to Covid-19 vaccines has focused on “vaccine nationalism” or the hogging of jab supplies by the countries of the West at the expense of poorer populations in much of the rest world.

This has predictably led not just to a shortage of supplies within the richer states, including members of the European Union. Crucially, however, it has meant that access remains a mirage for poorer countries further downstream.

Escaping scrutiny is the question of what governments such as Kenya’s are doing with the few supplies they can scrounge, beg or buy. The  government’s approach to the pandemic has been characterised by poorly thought out, brutally enforced lockdowns that regard Kenyans as problematic children to be beaten into submission, not citizens to be persuaded and consulted.

The approach has had limited success and, coupled with public disregard of the measures by senior officials, including President Uhuru Kenyatta himself, has instead aroused widespread resistance to government impositions that have taken little account of people’s circumstances and needs.

It has also turned out to be a cash cow for politically-connected “tenderpreneurs” who have quickly established companies for the sole purpose of stealing nearly $80m allocated to purchase emergency personal protective equipment for healthcare workers and hospitals across the country.

In Kenya, politicians and their business friends rarely waste a crisis. For example, in 2008, as the country faced starvation following the disruption caused by the post-election violence they had instigated, elected officials got together to hatch a subsidy scheme that funneled public cash to their pockets while a third of the country starved.

The same has now befallen the vaccine rollout. The plan outlined by the Ministry of Health involved three phases, the last two of which were to run concurrently.

Phase one, meant to run from February to June 2021 would target 1.25 million health workers, security and immigration officials.

In phase two and phase three, from July 2021 to June 2022, nearly 10 million over-50s and over-18s with underlying health conditions and 5 million of those considered vulnerable, such as those in informal settlements, would be immunised.

However, the plan fell apart almost as soon as its rollout begun. Politicians loudly and self-servingly argued that they should be given priority in order to inspire confidence among the population, even though the Ministry of Health was reporting encountering little resistance. Because the state had ignored the need to explain its plan to the population, there was widespread confusion about where and when people were expected to be in line.

Soon the elite, including politicians, captains of business, government officials and even journalists, were flooding social media with tales of their queue-jumping exploits and experiences, safe in the impunity that has always shielded them from accountability. This as their elders endured long lines following a last-minute government decision to fast-track phase two in recognition of the third wave.

Even worse, an unseemly war broke out between tenderpreneurs linked to different factions within the government pushing different vaccines.

While one faction is behind the Astro-Zeneca vaccine which was what the government was rolling out, another has procured the Russian Sputnik V vaccine and begun to distribute it using private facilities.

The state has now banned private importation of vaccines, arguing that it was safeguarding against counterfeits. Though that is a danger that should not be discounted, there has not been a suggestion that what was in the market was fake.

Further, rather than tighten its regulatory regime, the state is throwing out the baby with the bath water, further reducing, rather than expanding, the stock of vaccines accessible to the population.

Much of this could have been avoided, if the government and its global partners, including the WHO and Western governments, treated Kenyans as partners in the rollout scheme rather than colonial subjects to be brutalised and exploited.

Sadly for Kenyans, their colonial state does not know how to act any different.