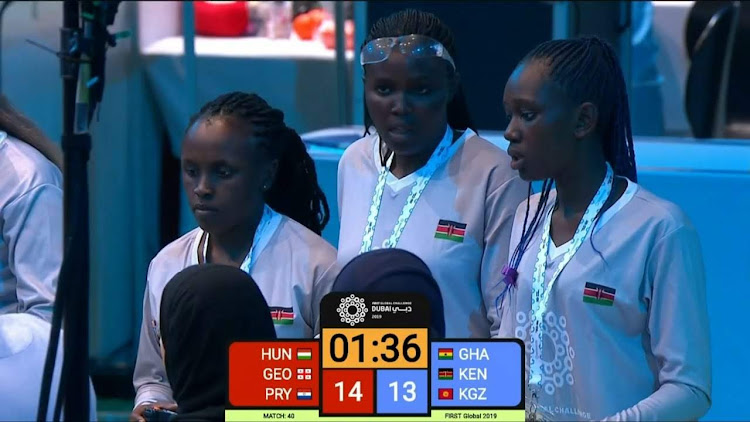 What if we celebrated science, technology, engineering and mathematics (STEM) like we do athletics, basketball and football games?

FIRST Global believes it is through STEM that the world’s next generation can work together to create a better world for us all.

The word FIRST stands for: For Inspiration and Recognition of Science and Technology.

The annual FIRST Global Robotics Challenge is on a mission to inspire leadership and innovation among the globe’s nearly two billion youth through the sport of robotics.

And Kenya is once again among the countries standing up to be counted.

In a room next to the resource centre at Kivuli centre in Kabiria, Team Kenya is actively engaging mentors to build their robot in preparation for this year’s edition.

They are very excited about the machine as they take it outdoors to run a test after coding. It is being controlled by java coding language keyed on a driver hub and a gaming pad that controls its different functions.

Building, or rather, assembling robots is all fun and games to bring them to life, but robotics is basically about joining together different fields.

With mechatronics (mechanical engineering and electronics), programming and IT-related fields, robotics build cognitive skills like problem-solving, the ability to comprehend and implement and even critical thinking.

In a race against time, Team Kenya is determined to fully assemble the robot and test its launching, collecting and lifting mechanisms as well as its mobility.

The robot, dubbed “Omanyala”, has to compete in alliances formed with teams from other nations against other alliances on a playing field.

The motivation behind the robot’s name is based on the fact that the team is determined to make it move fast and go against all odds to make it to the final stage of the competition.

“The FIRST Global Challenge enables kids around the world to all participate in solving problems and cooperate with each other to solve the world’s problems,” FIRST Global founder and renowned inventor Dean Kamen said.

I gradually grew to enjoy tech because of my family. I have attended a number of science, tech fairs and competitions. I even recently won the 2020 tech category award from YSK

FIRST Global Challenge (FGC) is an Olympics-style international robotics competition that takes place in a different country each year since its inception in 2017.

FIRST Global invites each nation to send a team of teens between the ages of 14 and 18 to build and programme a robot to compete.

Teams work together to complete tasks in a game themed around one of the greatest challenges facing our planet, including the 14 grand challenges of engineering.

This is in an effort to foster understanding and cooperation among the youth of the world as they use their abilities to solve the world’s problems.

This being the sixth year of the competition, Kenya has been participating in the challenge for all those years.

Kelvin Kangethe, the team manager, has been able to successfully coordinate all teams that have participated in the competition before.

Kangethe, who is also the TME Education Kenyan Ambassador, works alongside four other coordinators, who also act as mentors.

The team members under their watch have all participated in various science and engineering fairs all over the country, such as the Young Scientists Kenya (YSK).

The team is expected to travel to Geneva, Switzerland for the FIRST Global Robotics Challenge from October 13 to 16.

Annette Mwende, mentor and head of finance and fundraising, says they are optimistic about having the best project this year that will give Kenya its deserved win.

“We are hopeful that we will emerge as one of the top teams and gain exposure to what other countries are doing in terms of robotics and SDGs and how they are dealing with carbon capture in their different countries,” she said. 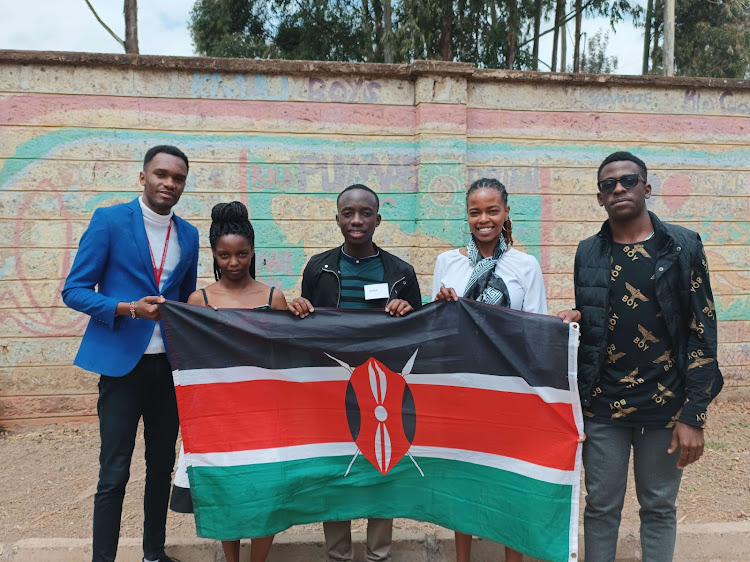 Florida Chepkirui, Enoch Omweri and Kristian Onjala, all 18, are determined to venture into the field of robotics and greatly impact their different local communities through tech and innovation.

This is majorly centred on providing society with solutions to our everyday problems.

Florida, having completed high school at Mama Ngina Girls in Mombasa, says having interacted with different tech and innovations, she has never dealt with robotics before.

She hails from a tech-savvy family and obtained her first laptop when she was in Class 8, where she first started learning how to code.

“I gradually grew to enjoy tech because of my family. I have attended a number of science, tech fairs and competitions. I even recently won the 2020 tech category award from YSK,” she says.

Chepkirui is hopeful her team will win and have a memorable experience together with her teammates as this is her first time travelling outside Africa for a mega competition.

Enoch Omweri, a Kapsabet Boys High school alum, says to him, it is not all about competition.

He believes the technology they are building will be used to make the ecosystem green for a better future.

“As we destroy our environment now, the environment itself is also finding a way to destroy us. Once we have vanished from this planet, it will find a way of redeeming itself,” he says.

Omweri, who is also a delegate of the Model United Nations, says FGC gives them an opportunity to leverage the power of technology to solve global problems and serve the world in a greener environment.

Through this competition, he hopes Kenya will create a network with other members from different states.

“FGC serves Kenya in a big way in that we can expand our minds through interactions as we learn the different technologies other nations are implementing,” he said.

Onjala says this is a perfect head start in his journey of joining campus and majoring in computer science.

Why Kenya is among the countries feeling the heat

The challenge is back with an in-person competition after two years of virtual games.

The Geneva event will mark FGC’s first European event as prior FIRST Global Challenges were held in Washington DC, Mexico City and Dubai.

Reducing and recycling our current emissions is an important part of the equation, but it is not enough.

The biggest and most difficult challenge is reversing the damage that has already been done.

According to FGC, heat-trapping carbon dioxide levels in the atmosphere are today 51 per cent higher than before industrialisation.

Some carbon removal strategies include augmenting natural processes in land, oceans and rocks.

This occurs naturally but high levels of carbon dioxide currently in the atmosphere are more than natural processes can handle within the time frame we have.

In the Carbon Capture game, shifting global alliances of six national teams work together to capture and store carbon, demonstrating the collective effort required to protect our shared atmosphere.

They then divide into regional alliances to focus on local efforts for the long-term storage of CO2 to slow the effects of climate change.

Aside from assembling a robot, team members are also obligated to create awareness.

This involves reaching out to members of the society and educating them on matters related to the year’s theme, in this case, carbon capture.

In 2019, Kangethe says, one thing that stood out was that young people really brought about much-needed attention to plastic pollution in water sources, specifically oceans.

“The world was facing a challenge of plastic pollution that is affecting marine life and it is an ongoing problem,” he says. 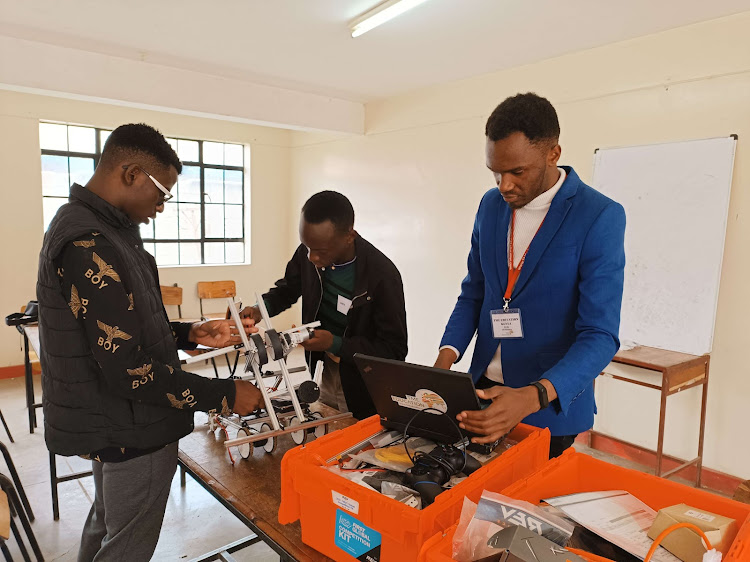 With this year’s theme, Team Kenya has interacted with the public through social media posts.

“Currently because of the political temperature, we have not been able to actively go out into the community and practically engage with individuals to educate them, but we have been active on social media,” Kangethe says.

“We are hopeful that we can get a chance to use the mainstream media, such as radio and TV, to educate the masses and transform mindsets. We are learning from different countries that are taking steps to impact climate change.”

Kangethe says it is important for Kenya to participate in FGC as technology is revolutionising everything from agriculture to energy to even healthcare.

Kangethe also says that alumni from previous competitions have been greatly impacted.

“Some of them have gained scholarships to study abroad, and others have founded their own companies and initiatives. Most of them have also been active with STEM outreach throughout the country in partnership with organisations like Young Scientists Kenya.”

The team is facing financial struggles in travelling to Switzerland.

They are hoping they can secure support from donors and sponsors before the actual travelling date.

The fee caters for food, accommodation and generally their stay in Geneva. However, the team is tasked with raising funds for flight tickets and visas.

“From the team of 10, we are only going to pick five and the other five will be representing the country in a different tech event in Algeria in September. Both events require us to chip in one way or another,” Kangethe says.

He says they have established a fundraising model where they are trying to bring in partners who can help raise the required amount.

“We have already seen TME Education commit to contribute $5,000,” he says.

Since 2017, Team Kenya has been trying to reach out to different government agencies, local NGOs and organisations through sponsor letters for support, but it has been in vain.

“This year has posed a challenge due to the political season. From last year, we had a few promises here and there, but with the transition to a new government, it has become a challenge to follow up,” Kangethe says.

“Going forward, we would love to have the government be actively involved in this.”

He added that they have also applied for financial aid that is being offered by FGC.

“We have hope that we will get it. If we do, the funds will help us to cater for other pending expenses,” he says.

Team Kenya has also established an M-changa account and through the FGC website, a team profile has been created for them where one can donate to support them.

“We are open for donations and sponsorships. We have set up several packages. For any amount above $100, we will recognise the donor and feature them on our social media posts and/or team uniform.”

“For any amount above $500 and $1,000, there will be more recognition. However, for any amount above $10,000, FGC will directly recognise that sort of donation and they will extend an invite to the individual to come to Switzerland and cheer the team and get to see what we will be doing,” he said.

Team Kenya also faces a challenge in terms of creating a replica of the playing field surface in terms of game design.

“The playing field is the area in which the robot is supposed to move and perform some tasks, hence the need for the playing field. We need around Sh30,000 to recreate it,” Kangethe says.

Having a central venue where all the students can meet that has access to electricity and good network connectivity is also a challenge.

“We need a patron who can sponsor the team with food and team uniform and transportation. This is because our team members come from different parts of the country and normally have to travel to Nairobi to come and prepare for the competition,” Kangethe says.

Team Kenya is positive that they will be adequately prepared for the competition despite the numerous problems.

“This is a chance for us to network with other young people from countries all over the world, and we are determined to make Kenya proud. So we will put in efforts to comprehensively practise with the robot in readiness for the competition,” Kangethe says.