No African university had made it to the quarter finals, yet they broke this record to get to the semis, finals and finally be crowned winners

• Strathmore students were not only the first African students but also the youngest to win a global law competition.

• They qualified for a half-paid Georgetown University Master's scholarship, and a full scholarship for summer and winter programmes. 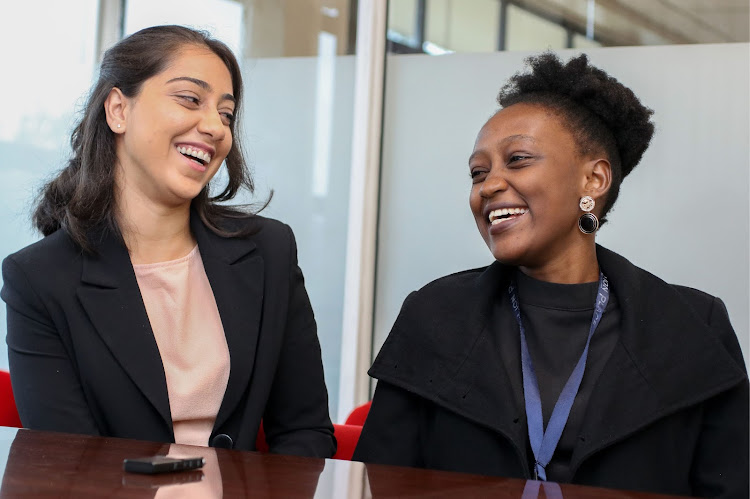 Maleehah Khandwalla and Catherine Penda laugh during an interview at the Star offices in Westlands on Wednesday.
Image: VICTOR IMBOTO

As smiles fill their faces, their story goes down the history books as a perfect replica of the famous biblical tale of David battling Goliath and emerging the winner.

It is the remarkable story of Catherine Penda, Mishael Wambua and Maleehah Khandwalla — all Strathmore University students.

They came to the limelight as not only the first African students but also the youngest to win a global law competition: the John H Jackson Moot Court on World Trade Organisation (WTO) Law.

The unusual triumph earned them a standing ovation, as they took the acclaimed Harvard University competitors by the horns in the finals of the contest.

It is a competition in which no African university had ever made it to the quarter finals. Yet they broke this record to get to the semis, finals and finally be crowned winners.

Yesterday, Penda and Maleehah recounted to the Star the rigorous competition that ran for six days in Geneva at the headquarters of the World Trade Organisation.

From the onset, they aimed to outsmart their opponents in arguing a case on regulation of international trade between nations. This ran through all stages of the competition, from the local competition that began at the Kenya School of Law in February last year.

To them, only one rule guided them through the competition: Never ever have bad days, as this would lead to elimination.

"The knock-out nature of the competition means you have to get things right. So we stuck to the training our coaches had taken us through over a one-year period, keeping in mind any mistake made in the competition would have dire consequences," Penda told the Star yesterday.

Harvard took the stage first as they were the complainants. They were backed by a good reputation and made a powerful presentation. We had to raise the bar to outdo and impress the judges

It is hard work that has earned Mishael, who emerged best orally, a fully paid scholarship in the University of Barns.

Collectively, they qualify for a half-paid scholarship to take their Master's degree in law from Georgetown University in the US, and a full scholarship for summer and winter programmes.

Maleehah Khandwalla, 22, was born and grew up in Mombasa, where she attended Jeffery Academy through primary and secondary school.

The third-year law student credits her doctor father and accountant mother for nurturing her fluency, articulation and courage to take the stage and voice her opinion.

"Since I was nine years old, I have been debating, and it was really my mum and dad who always encouraged me to voice my opinion, no matter what it was. And so law was the most natural kind of option for me to enter into," she told the Star yesterday on the phone.

Yesterday, Maleehah recounted the thrilling moment the team encountered the reputable Harvard University students, who were their match in the finals.

With only a split of an hour between the semis and the finals, they pride in their unity and focus, which helped them remain on top of the competition.

Strathmore to team up with firms for better training

Private university Strathmore wantsto forge deeper ties with variousorganisations and industries to help incontinuousinnovation of its curriculumto ...
Counties
6 years ago

"Harvard took the stage first as they were the complainants. They were backed by a good reputation and made a powerful presentation. We had to raise the bar to outdo and impress the judges," she recounts.

"We had done our best. We had given the best shot throughout the competition, but you could not tell which side the judges would pick, and you know Harvard is Harvard. But when the results were announced, we got a standing ovation."

For Penda, 23, law had always been her passion, and as she grew, so did the passion become stronger.

She was born and grew up in Kiambu, where she schooled through her primary and secondary school.

She prides in having taken her secondary education from the Stephjoy Secondary Schools.

During her early and mid-teens, she learned oratory skills from her father, who would sit her down and dry-run speeches he was preparing to give in various events.

Slowly, Penda mastered the skill and would quickly put it to use in school during public speaking in school.

"I always felt law was for me, and after I finished school, I applied to Strathmore and I was ready to wait for a whole year if they did not pick me in my first application and apply again," she said.

After qualifying for the African regional battle, the team had a month to prepare for the quarters, where they were facing a European team.

Unlike in the regional competition, where they had the mentorship of coaches who had taken the competition before, the international arena was a whole different ball game.

Prof John Odhiambo has been re-appointment the Strathmore University Vice Chancellor for another 5-year term.The appointment by the university ...
News
4 years ago

They had tossed themselves into an arena where no one knew how high the bar was set, and they just had to jump, hoping they had jumped high enough.

"We did not know what to expect in the quarters, since no African team had ever made it to the quarters. We were in an auditorium when the results were announced, and I remember when they were announcing the shortlist and they mentioned code 078 [their competition code]. I looked back at my coach and he looked at me, and we smiled and texted our other coach, uncertain if it was true," Maleehah said.

Going through the quarters was a miracle for them, and it gave them new energy to push the limits and emerge as the cream of the crop.

"I remember telling the other guys, we can do this. We made it to the quarters and we have to go forth and win the competition, no matter what," Penda said.

They hope their win opens the gates for more African students participating in the competition.

They talk highly of Strathmore University as the source of inspiration that has nurtured their passion.