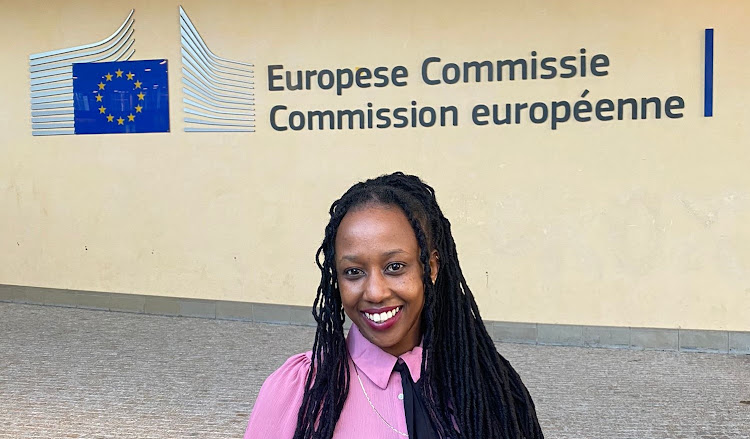 Mwathi Kitonga was broken when her father senior counsel Nzamba Kitonga died in October 2020. The frenzy that comes with dealing with death was overwhelming her family.

But the Alliance Girls’ High School alumna would not let the tough situation take her down. Mwathi Kitonga fought for her sanity. And the fight brought much good.

Grieving is a long process, and it somehow never ends, remembers the mid-career lawyer of her early months of 2021.

Helping people find themselves and rise above divorce or grief

The digital space brought some comfort. Mwathi would search for courses she could do to keep her mind occupied. She took an online course on strategic management, but it ended too fast. She went back to search again. Just by coincidence, on that day she was scrolling through Facebook. Yes, imagine, good ol’ FB.

The advertisement was from the European University Institute School of Transnational Governance, and their notice was calling for the first cohort of the Young African Leaders Programme. The studies would be done in Florence, Italy.

“The advert looked interesting. The fellowship needed someone with a Master’s degree and a mid-career professional. I decided, ‘Well let me try it,’” she remembers.

The application was quite intense, and it took all her efforts with all the details, such as tuning the motivation letter and a host of other details. She completed and submitted in good time, which was in March 2021. She then forgot about it since she was also putting together her application for doctorate studies.

“In June, I received a letter congratulating me on being accepted for the fellowship. We were 17 young scholars from all over Africa,” she says. Then she alerted her family about the fellowship, which was a dream come true for the only Kenyan to be chosen.

From rural school in Kiambu to Obihiro University in Japan

It’s about time young Kenyans offer a different way in leadership, rather than regurgitate the mistakes of their predecessors

Travel at a time of Covid-19 has its own intrigues. Luckily, she had her vaccination all done in good time and her vaccination certificate in place. The journey started in September, and she got into the School of Transnational Governance in Florence well. The orientation included being shown around the Buontalenti campus. They were advised to be ready for a very busy and intense programme.

“They did not disappoint. We learnt so much, and towards the end of the programme, we even had afternoon sessions.” The course, led by professors from Africa, such as Prof Mehari Maru, was to challenge young Africans to start thinking of how to solve Africa’s challenges, including economy and trade, law, migration, peace and security and leadership.

They were to ask themselves if Africa can emulate or borrow from the European Union structure, such as having a standardised system of laws, a single internal market and one currency. The course was more policy-driven, which was useful in her application process.

The speakers and facilitators delved into policy issues such as migration, human rights, currency and money, politics, environment and international development.

“There was a lot of group work. We talked to each other and picked one another’s minds. We did the group assignments and presented as expected,” she remembers.

The courses also included two tours, to EU capital Brussels and to Berlin. The two different trips came midway through the course. Other than the intrusive Covid-19 tests everywhere she went, the weather change as the autumn season transitioned to winter was not too kind to her.

“I lived in the United Kingdom while doing my Master’s at the University of Kent, and that means I encountered the English winter. But the Italian winter was a bit exaggerated,” she says, quickly excusing her age.

“Maybe I was younger when I was in the UK. This time round, my facial skin cracked, my hair kept breaking and even though the body adjusted, it took a toll on me.” She also had to buy the right clothing for the winter to keep warm.

Weather problems notwithstanding, the lessons were amazing to Mwathi. She feels that Africa’s problems are similar, including bedevilling issues such as corruption and tribalism. The unemployment crisis, and the leadership dilemma where Africa’s presidents are mostly those who stick to power until death.

“I realised Kenya is not an isolated case. Others are suffering just like us. Hence it’s up to the younger generations to change the tide.” Mwathi was appalled to see how little she knows about her Kamba culture, an aspect she blames on being brought up in the city.

“Many of my fellow cohorts know so much about their particular cultures, including their histories and cultural practices.” She felt so motivated and optimistic because young people are proud of their music, food and other social practices.

“I feel I can do so much with less. I want to be a better leader even in my own small space. I want to listen more to others, consider their ideas and opinions and appreciate that we are different,” Mwathi says of her hopes in the coming days.

Her articulation of issues is now wider when writing policies. She is thinking of Africa and East Africa first. Her choice of music has also transitioned from hip hop and old school to more of African musicians, after she noted her fellow learners were very keen to listen to African music even in their rooms.

“I now enjoy and dance to an African rhythm and feel good. I learnt that your surroundings, your environment, can influence who you are.”

Among the African scholars that impacted her like Hannah Tsadik, Muthoni Wanyeki and Dr Francis Deng, a Nigerian called Prof Chidi Odinkalu stood out. He pushed them to think deep and wide. He was straight and brash, he asked direct questions and demanded practical solutions from the learners.

Mwaithi, a University of Nairobi Environmental Law doctorate student, said more Kenyans should apply to and join the EUI Programme. Anyone who wants to see life from a different context and to be part of solutions in Kenya, this is a discourse you need to be part of, she says.

“It’s about time young Kenyans offer a different way in leadership, rather than regurgitate the mistakes of their predecessors,” she adds.

“As the Alumni Group of the Young African Leaders Programme, we are working on setting up a forum to help identify, support and mentor the next generation of leaders as part of the take-home from our experience.”

First-class no guarantee for scholarships, but it’s worth the toil
by Mercy Gakii @Gakiiz
Books
15 April 2022 - 05:00