The people and not MPs always get to choose their leaders 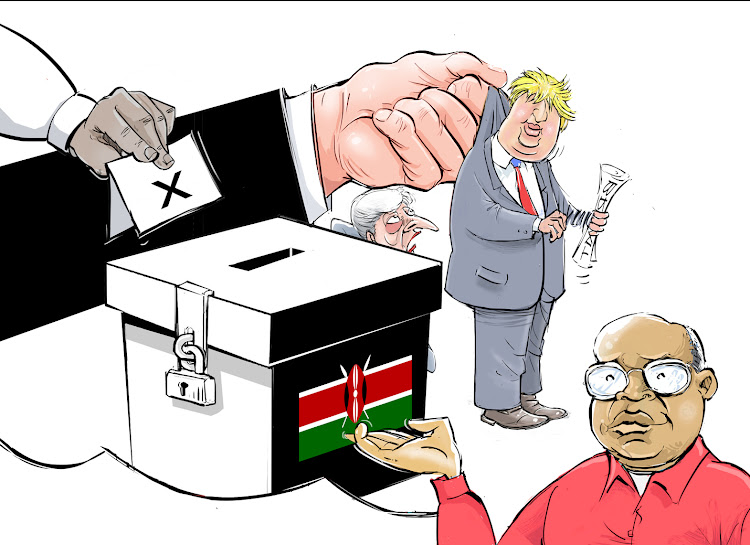 I find it amusing that Kenya, which only restarted its multiparty electoral democracy in 1992 after a 23-year hiatus, looks more democratic, at least on paper, than former colonial power Britain.

All things being equal, in less than a fortnight, Kenya should have a new President. The people will have decided and the new era can begin.

Of course, being Kenya and with our electoral history since 1992 (with the notable exception of 2002), we can expect that there will be drama during and after the announcement of the results.

Nevertheless, if all goes well, Kenya’s new President will, in theory, have been elected by most voters and as such, have the mandate of at least 51 per cent of the country to lead the country and implement their agenda.

It is not so straightforward for the electorate in Britain, where a new Prime Minister is expected to start rearranging the furniture at Number 10 Downing Street in September, shortly after Kenya’s new President moves into State House.

While I appear not to have inherited the power to see into the future that one of my recent ancestors is reputed to have had, and I cannot tell you who will occupy the old governor's mansion in Caledonia, Nairobi, I can with certainty assure you that the next British Premier will be a member of the Conservative party.

This is because in Britain, the vote for the new leader will not be going to the country, at least not just now, but to members of the ruling party.

In a country where about 48 million people, about the size of the entire Kenyan population, voted at the last local government elections, roughly 200,000 Conservative Party members who can prove they joined the party on or before June 3 will choose the next head of government.

I say roughly 200,000 because, as the BBC put it: “It's not clear how many members there are — political parties don't have to give precise numbers. However, about 160,000 people were eligible to vote during the last Tory leadership election. The party says that number has since grown.”

This is not the first time in the last 40 years or so that the members of only one political party will pick Britain's leader.

Back in 1990, after the Conservatives defenestrated their one-time vote-winning champion Margaret Thatcher after she began to look like an electoral liability, the party thrust her former Finance Minister John Major into Number 10.

It was not until the 1992 General Election that the wider British electorate could endorse Major.

It happened again in 2007, this time under the Labour party. Tony Blair resigned as PM and was succeeded by his long-term Finance Minister Gordon Brown.

When the general electorate got their chance at the 2010 General Election, they threw out Brown and brought back the Tories under David Cameron.

When Cameron lost the Brexit referendum in 2016, he quit and triggered a race to succeed him in the Tory party, which was won by Theresa May, who again was never the general electorate's choice, and neither was her 2019 successor Boris Johnson.

Johnson had to wait a few months in office before going to the country. When he did, he won with a good majority, but now he, too, is leaving after his party got rid of him, and again, the British electorate will have to wait before they can either endorse or reject the successor.

Here in South Africa, too, when the ANC won the second democratic election in 1999, President Thabo Mbeki succeeded President Mandela after being elected by MPs, without having to face the full electorate until afterwards.

It’s been the same for every President since then, and with the rumblings in the ANC ahead of its electoral Congress in December, who knows what might happen?

The only time in Kenya we had such a handover was when President Jomo Kenyatta died in office to be succeeded by Daniel arap Moi in 1978.

Moi was formally elected President a year later, but as Kenya was a single party state, he was unopposed.

MUTUNGA: Elections have given us neither democracy nor freedom

What they give us is a golden political opportunity to continue our struggle for a just, free, independent country.
Siasa
2 weeks ago
Kenya’s Game of Thrones is boring and predictable
by Mwangi Githahu Columnist
Lifestyle
31 July 2022 - 05:00