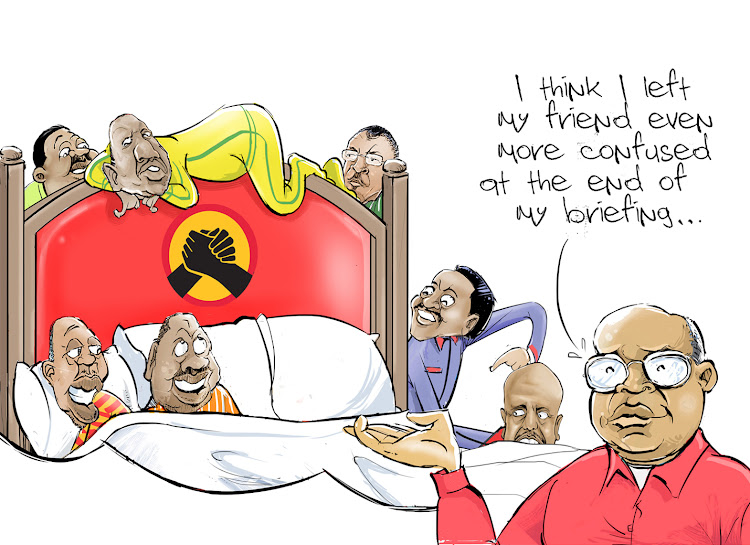 There was a story shared on Twitter about a potential foreign investor who approached an old colleague of mine for a briefing on the political situation in Kenya some years ago.

Some time after he had given the investors his two cents' worth, one of the potential investors rang my colleague. He appeared to have suffered disappointment and was unhappy.

When my former colleague asked what the problem was, the investor said: "Kenya has the ambition but not the integrity for success."

For me, that one sentence really got to the heart of the matter and could be used to explain so much about how we continue to get things wrong, including in our politics.

The story reminded me about how I had tried to explain the current political state of Kenya to someone.

Explaining Kenyan politics to people who don’t follow all the intricate ins and outs in the way that most Kenyans, or people with specific interest in the political scene there, can be difficult, to put it mildly.

I have an idealistic South African friend who spent some time in Kenya working with the Africa Liberal Network, which is an alliance of liberal democratic political parties established during an initial meeting of political parties in Mombasa in July 2001 before being formally launched in Johannesburg in June 2003.

We were chatting about something else when he asked me whether there were elections in Kenya later this year.

I replied in the affirmative and told him that as things stand right now, it looks as though the election will be an event marked by chaotic controversy. To be precise, I used the colloquial term: sh*tshow.

When he said he had been out of touch, I decided to put the situation in a very small nutshell for him, and this is what I said:

The President Uhuru Kenyatta and the Deputy President William Ruto fell out around the last election in 2017. To be honest, theirs was only ever a marriage of electoral convenience for the 2013 election, when both men faced “challenges” at the ICC.

The President is now in bed, politically speaking, with former Prime Minister and one-time leader of the Opposition, Raila Odinga. He is campaigning for him, and not his deputy, to become the next President in August’s election.

I explained that Ruto, meanwhile, has been in campaign mode since the 2017 election and has built his own coalition and rival power base.

I said: “As for the rest of the wannabe front runners, their realistic choices are either Raila and Uhuru’s team or Ruto’s side.

“For those who can stand neither grouping, the best bet is to organise an abduction (either of themselves, but preferably of the aforementioned two teams) by aliens from outer space.”

When he asked me whether there were vast ideological differences between Raila and Ruto, I found it difficult to keep a straight face. It’s cute that outsiders think that ideology still plays a role in Kenya's politics.

Sadly, I think I left my friend even more confused at the end of my briefing than he was when we began.

His idealism reminded me that I have become an old cynic despite there being a brief time when once, I too saw politics through an idealistic prism. The good old days, whenever that was.

Meanwhile, this past week saw the opening of South Africa's Parliament and President Ramaphosa’s State of the Nation Address.

Despite the usual platitudes one has come to expect in all such speeches, be they here in SA or in Kenya or almost anywhere else, for that matter, there was one idea that grabbed my attention.

That was when the President began speaking about the effect that the hemp and cannabis industry, which has the potential to create more than 130,000 new jobs, could have on the economy.

It made me wonder what became of the late Kibra MP Ken Okoth’s draft Marijuana Control Bill, and whether either of the two main candidates would dare adopt it for their manifesto?